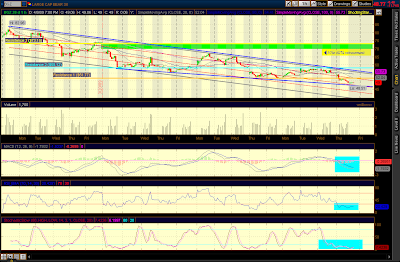 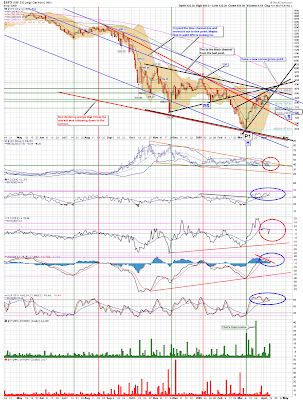 I updated the chart above and added the vertical lines where MACD crosses and STO crosses its EMA. If you notice where we currently are the two fakeouts at the EMA on STO are clear and SPX is running out of chances to hold up. When this crosses I would expect if to be significant but nothing is guaranteed. I also took a peek at the VIX and it is not as ready to turn as the market, but getting close daily and weekly.
I added a BGZ chart for you bears out there with retracements, resistance and gaps. The blue falling wedge in the channel is interesting. When they break out it should be pretty i like the 50% retracement at gap resistance at 70 for my first target.
We have a new convergence point. I also copied the major blue channel line and moved it up. From the indicators and the intermediate channel in the 60m chart in the post below and the looks of the indicators and resistance lines here any move above the current price IMVHO only will offer a better short entry. I've been proposing a large inverted H&S pattern for the breakout from the bottom that is still forming and that is roughly a 100 point formation there if it plays out. A back test of the red falling wedge appears to be out of the question and a back test of the blue major channel appears to be the new back test target in that retracement zone (black box).
Posted by Shanky at 3:47 PM