I found this delicious from Zero Hedge this morning,

"There is one main reason why complacency is bad: selloffs. Because as Bank of America explains, in an environment in which there are "too few bears", and where investors are "not prepared for a downside correction", when you do finally get a sell off for whatever reason, with nobody hedged and otherwise prepared for such an outcome, the only logical continuation is piling on until one gets selling exhaustion. And in a world in which hedge fund leverage is about 500%, by the time exhaustion comes, there will be very few left standing."

So few get it. So many have their heads stuck so far up their backsides worried about this and that (money, toys, perception) they miss the forest for the trees. Having basically a Fed run covert op with MSM and advisory deception at every turn does not assist John Q. Public identify the situation, but this is not rocket science. Apparently separating reality from fantasy has become increasingly difficult for the average and expert investor alike.

When, as I've shown repeatedly leading up to and at the top, CPC gets this whacked out there is a problem. 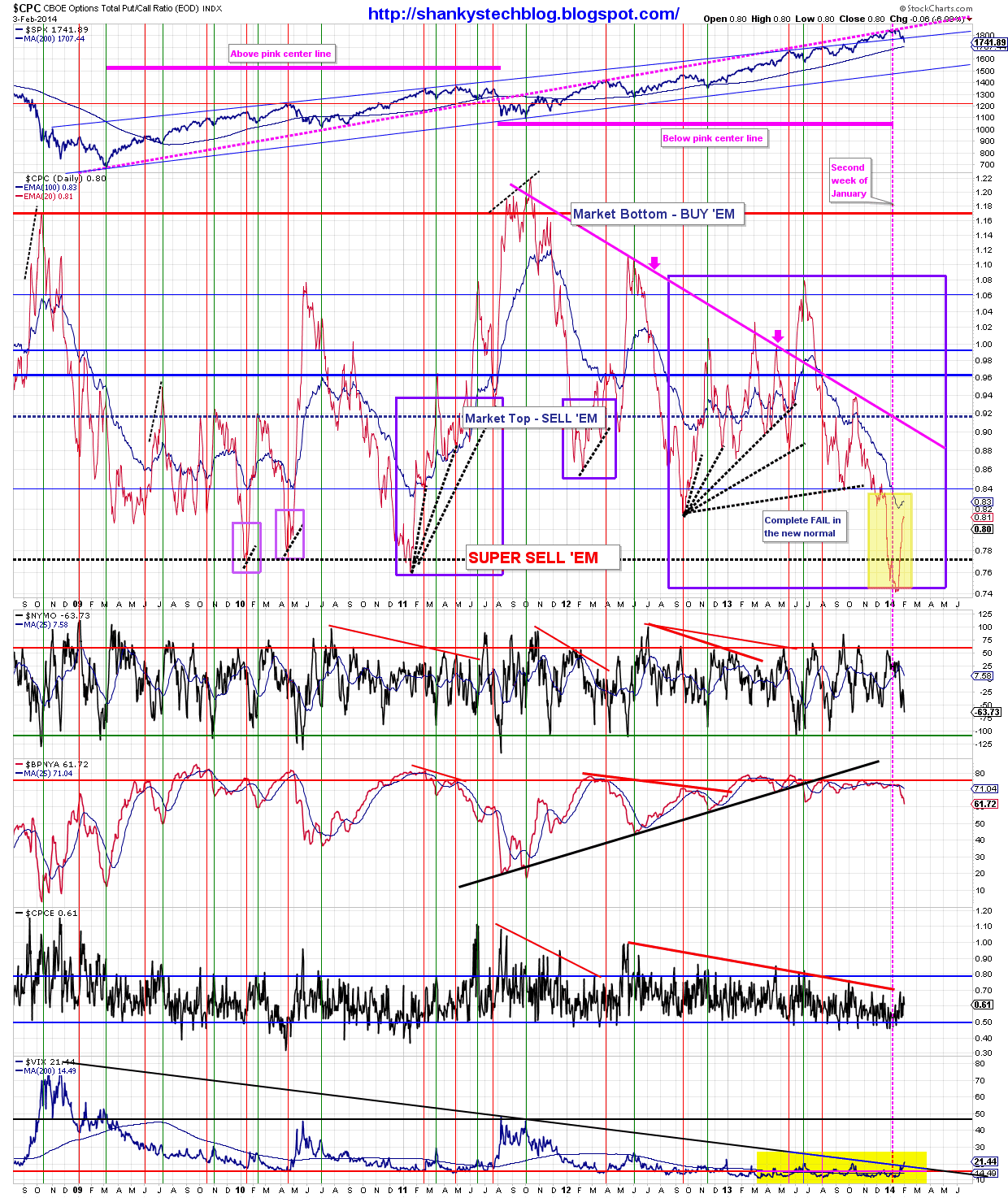 Or when Bullish Percent diverges to price like this there is a problem. 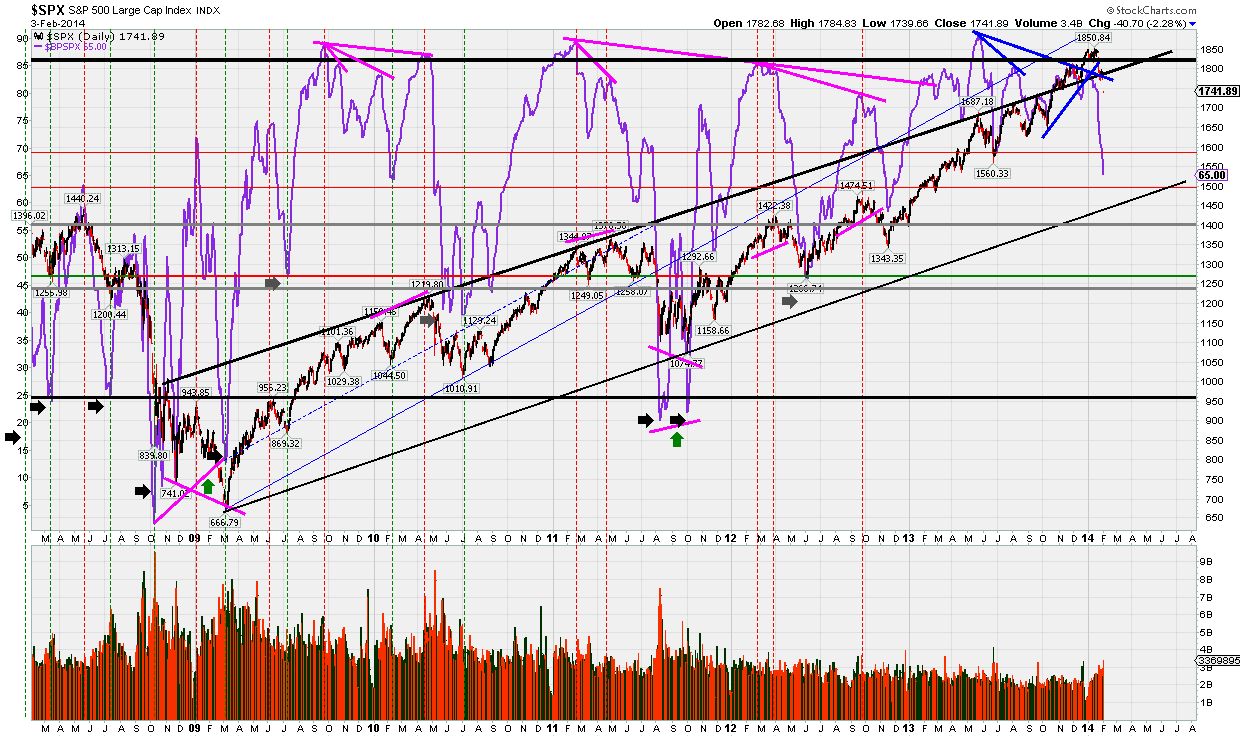 Add to that the internals, negative divergences, overthrows and bearish formations that have been begging for this market to turn. Anyway, the market is horrifically and most likely historically lopsided at possibly the worst time for it to be so in history. It's almost like everyone is trying to buy wish this economy back to prosperity, and that ain't the way things work. Soon, everyone will figure out that the Fed has pulled a fast one on them and that the recovery is a lie, and when that happens all those itchy trigger fingers will fire at once.

Minis Daily - All near term and long term support is busted. STB's red line of death has been breached. I'm a bit freaked out, as this should be finally the "it" moment. Of course we're also dealing with a more than desperate Federal Reserve that has a $4 trillion balance sheet and will do anything to protect its precious petro-dollar (although thru their arrogance and ignorance every policy they have done is killing it).STB still fears a market cheering reversal of taper and one last shot at moar QE for the last great stick save. Will this happen or is it over? No one knows, but that is the only fear the bears have left. 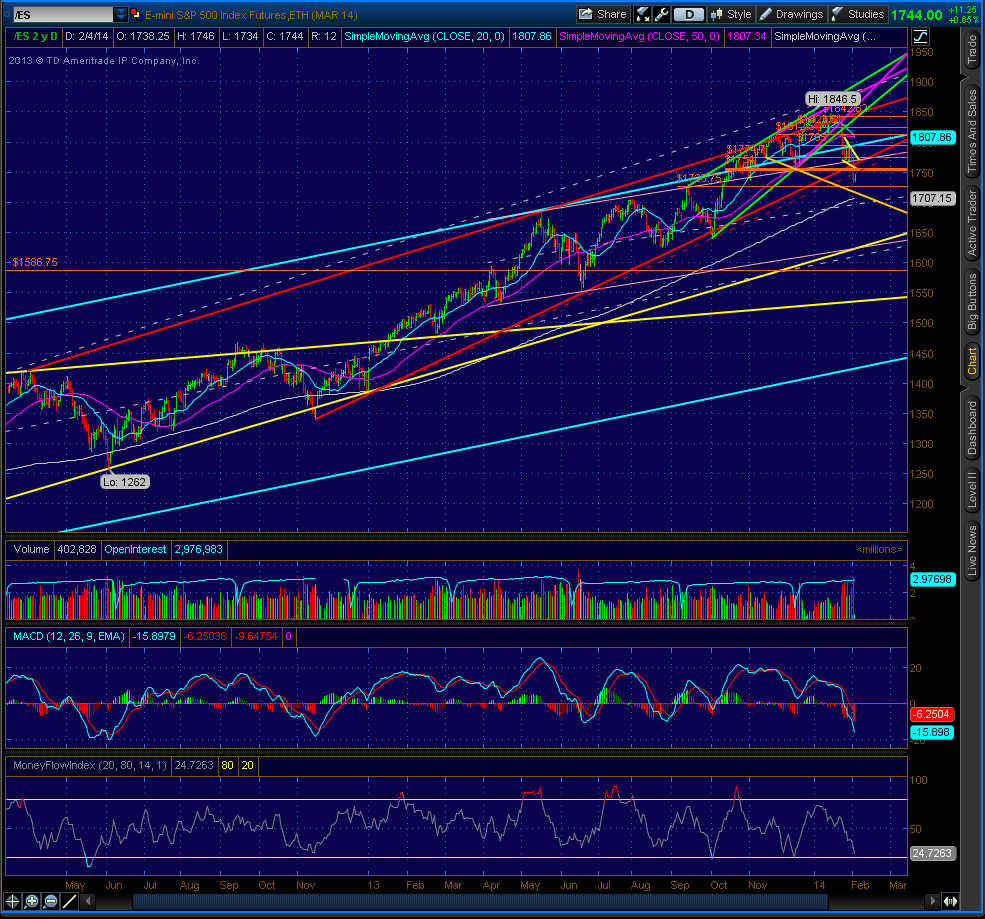 Minis Daily - I have no clue what or why price stopped where it did. Perhaps another index that I have not had time to check has a support point (I'll chart them all up today), but the /es simply stopped in the middle of nowhere. Off the top I called the red line of death as the point to watch and if that cracked the 200dma was the next stop. Perhaps we're about to get a backtest of the busted red support? 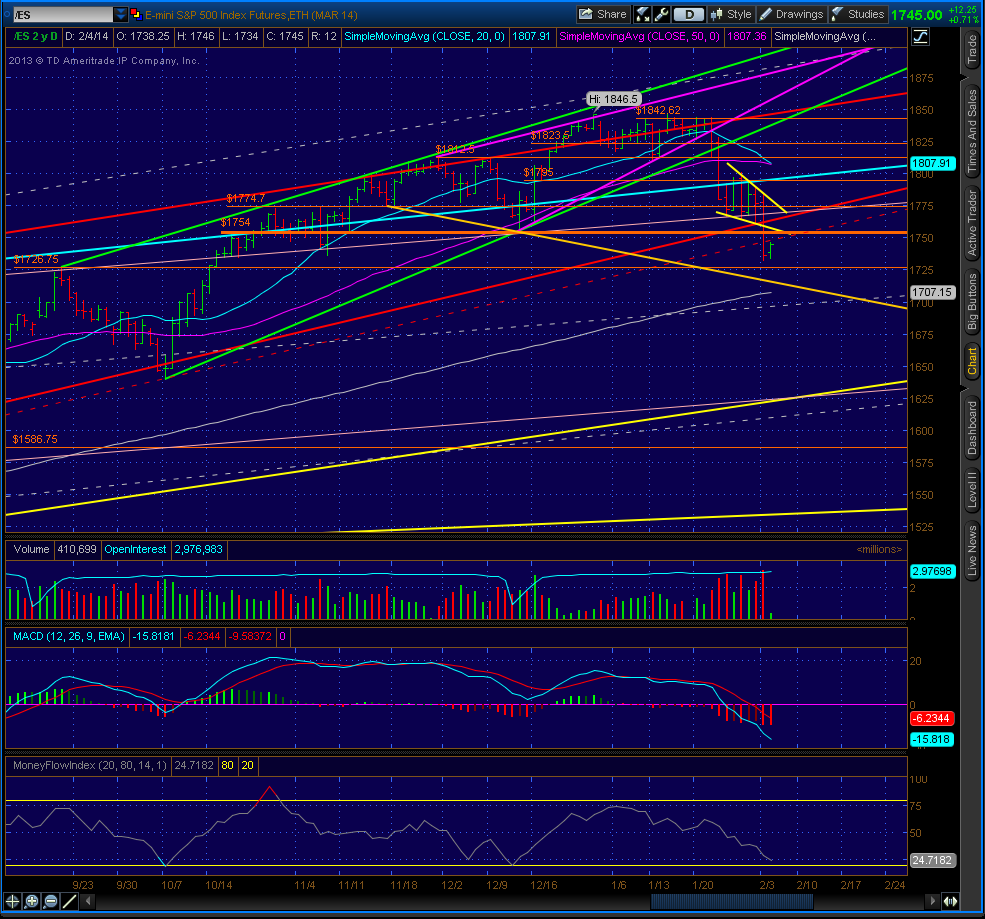 So much to figure and discuss. We'll take that all to the comments section below. Many options here, but bottom line is red wedge support is definitively busted. I've got to get my bearings a bit. I'm a bit shocked the red line of death was breached and the implications that brings with it are tremendous.

There will be some Fed speak later today that could be meaningful, so be watching for this.