Nothing new this morning. Just another MSM pukefest of lies and misdirection as they lay cover for their masters as the US and global economies rot to their cores. Yellen says the Fed is "likely" to continue its taper ON course. That's just great. So the Fed tapers and the global economy, especially in emerging markets, get hammered as a result of the taper ON.

Wait, global, hammered, cause of our Fed? That's right dear American taxpayer. Your future earnings and those of your children and grandchildren have been taken (not borrowed) by the Fed to fuel global growth stability via central bank lending, and now with the taper they are pulling the rug so to speak on the liquidity situations of these piigs on the teat.

This is just fine by the way. The global recovery is so strong that no one really relies on the Fed's continued printing to stabilize anything, do they? Note the operative word stabilize. One would think that growth would be an operative word here after the trillions flushed into the system that were fractally expanded. Wait, where did all this money go?  Well, you'll have to ask the 1% that question.

As their new taper ON policy shines a bright light on just how awesome the the Fed's policies have been, maybe the Fed's plan on continuing to manage the USD/JPY pair should be a more viable question? Well, that will never be addressed as the MSM is A) too stupid and B) to owned to dare shine a light on the only thing that's keeping the markets and their charade alive at this point.

Let this farce roll right into the coming debt ceiling discussions.Wait, stupid me, we have a tyrant president (who studied Constitutional law) who has a pen and is not afraid to use it no matter what congress says. We will be just fine, and whomever votes for him or his party will get whatever assistance they need no matter the cost. What's adding another trillion or two to the budget? potus has already spent moar than all presidents before him COMBINED. Never let a good crisis go to waste, right? I mean when you (potus) have your opponent (America) on two broken legs and blinded, you go for the kill shot right?

Don't forget your new buzzword Amerika - Capital Controls. They are coming. They have spent almost all the "future" money they can. There is only one place left to come for moar - your bank accounts.

Minis 60m - Pretty simple this morning. They have improbably rallied against all odds off the lows thru one resistance (STB's red line of death) backtest and are now facing another. Channeling up (green) price has now reached the backtest resistance point of all backtest resistance points. The upper blue long term (as in upper market resistance off the 2009 lows) resistance and the near term STB bull/bear line here at 1802 is a most severe test for bull and bear alike. Some would call it the top of a 2 wave (in that nasty worthless parlance). This point has the potential to be a incredibly pivotal. You can see in the chart that even after five years its resistance significance remains in play. If it breaks, moar of the same. If it holds and we get a strong reversal here, it should be game over. That's it in a nutshell. The Fed knows this and so do all the other players. This is a MAJOR technical spot. 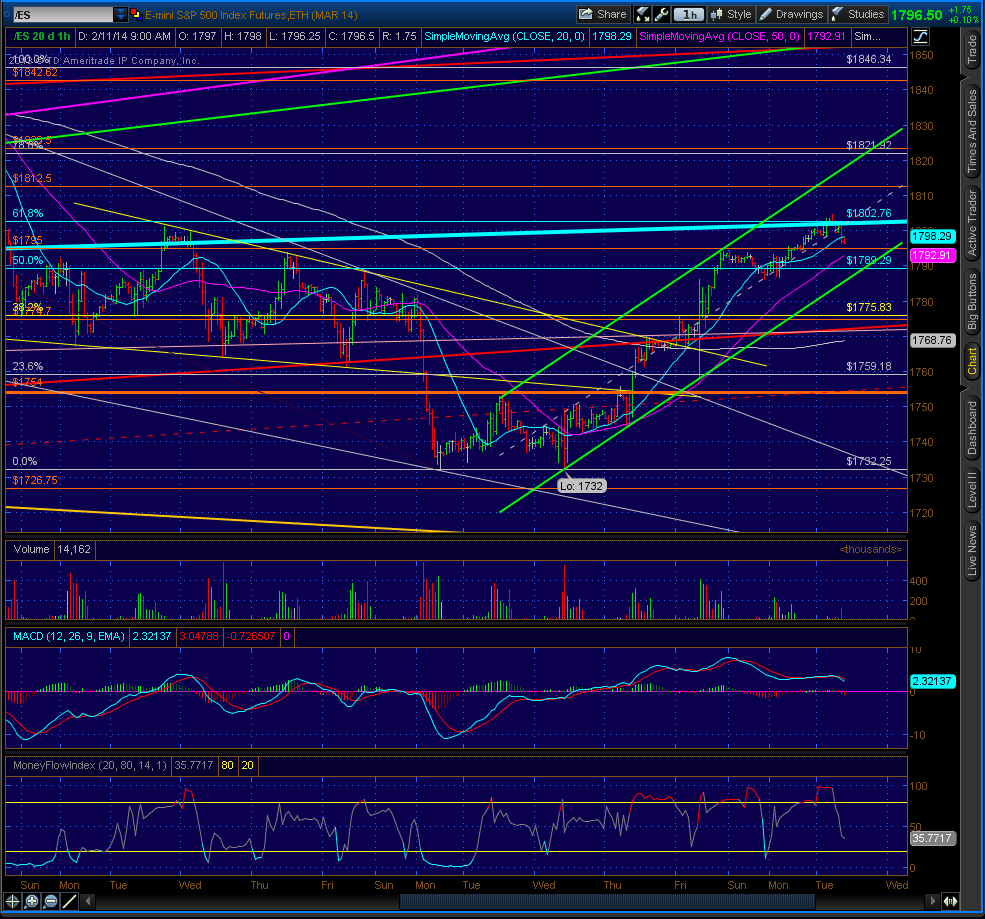