Look, I can only tell you so many times. I've been warning you for years. It's in their documents. It's been seriously discussed. It's their only way out. It's our retirement system and savings. The below is from the EU, but don't for one second think "it can't happen here".

""the savings of the European Union's 500 million citizens could be used to fund long-term investments to boost the economy and help plug the gap left by banks since the financial crisis, an EU document says." What is left unsaid is that the "usage" will be on a purely involuntary basis, at the discretion of the "union", and can thus best be described as confiscation."

I consistently tell you to take the ill-gotten gains and diversify them out of fiat into real assets.Sadly we're getting to the point those will have to even be burried deep in the grould far away and out of sight of the governments prying hands. What do you think the MyRA plan is?

"The solution? "The Commission will ask the bloc's insurance watchdog in the second half of this year for advice on a possible draft law "to mobilize more personal pension savings for long-term financing""


There is roughly $19 trillion in the US retirement system. What is the total debt? Uh, ya, about $19 trillion (excluding the $127 trillion in unfunded liabilities of course - those apparently do not count). Even Stephen baby!

So how do they continue the debt ponzi, the global financial lifeblood, when no government or banks wish to continue to fund the system?  They will simply "borrow" your funds for redistribution.

It's gonna suck folks. A revolution is coming. They are gonna steal it, and we're not gonna let them have it. The government just picked up another 140,000 rounds of .308 rifle ammo and has plans on buying a ridiculous 75 million rounds this year. They shut down the last lead smeltry, so all bullets going forward will have to come from overseas. Of course one would think this would be a national security issue, but apparently it is not. They can't get the guns, so they will take the easy way and just take all the ammo.

Agenda 21 folks, it's real. I highly suggest you take your heads out of the clouds and get in touch with what the UN has planned for us. Here, read the .pdf for yourself. 351 pages of goodness for mother earth and the elite. Sustainable development is what they call it, slavery is more like what it really is. This shit is real folks. You better wake up.

Minis 5m - well, we got scenario two I was discussing yesterday, which is the not so good one for team manipulation. STB was all over the 1802 backtest just when it seemed impossible. They were not able to keep price in the near term green channel though which could cause a problem. Either way, this is the backtest that STB was looking for. The small HnS from yesterday has played out. Pretty clear that the resistance here is going to be 1812 and 1823 and support is going to be 1802 and 1795. What they do here at 1802 is key. If it fails the bears may make another run and the top is most likely set. If it holds, then higher highs are almost a certainty. I have no clue. They took out the STB bull/bear line (1802). My hope was they just stick a spike thru it and not get a close above it. We have to follow our master's lead. We have no other choice. Tuesday at 1802 was the day several here were pointing out to be an exceptional short point. Well, here we are back at that number. If blue diag support gives way, it could get interesting again. 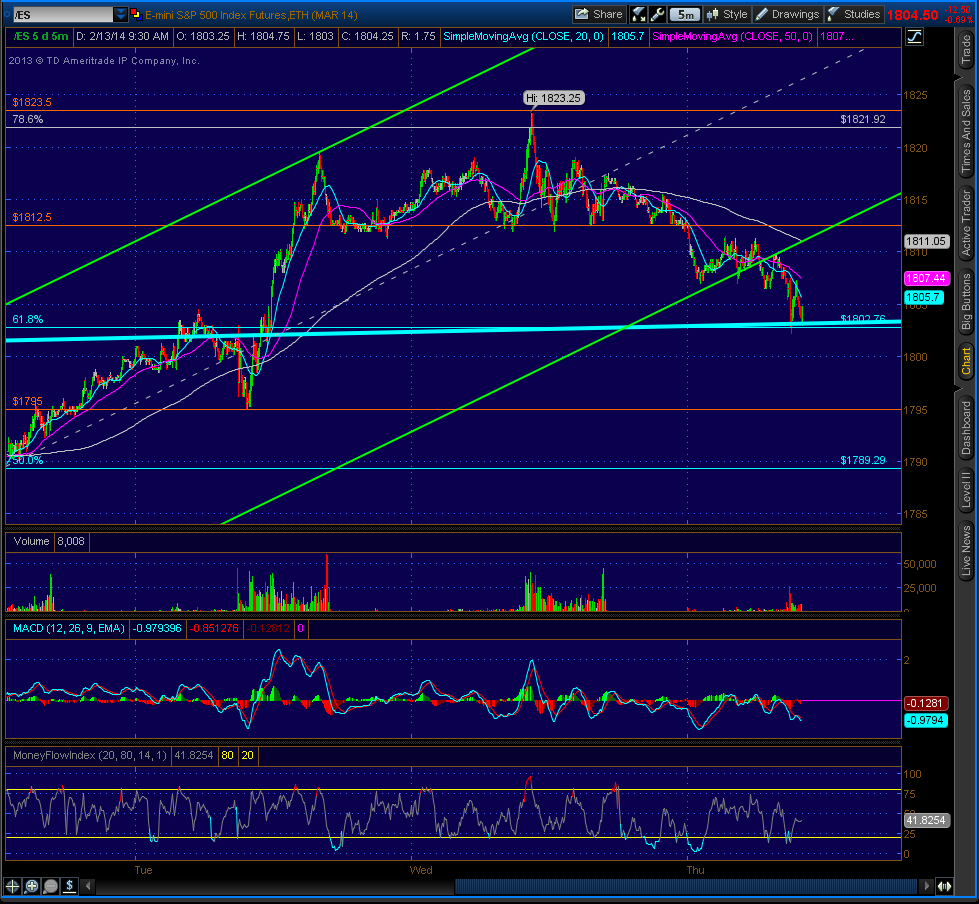