When I saw The Farce Is Complete: Blythe Masters Joining CFTC yesterday I almost blew a gasket. I'm not sure why. It's like, what should surprise any of us at this point anyway? This is just the natural progression playing out, right? It's just a final positioning of players for the powers that be to cover every corrupt corner of their empire.

OK, if you put two and two together (which they are counting on you NOT being able to do), it is not all that hard to read between the lines.

They are speaking to us here at STB now.

"It's almost as if they are explicitly telling the handful of people who still care about this entire charade a resounding "fuck you.""


They are sending a clear message. A message so clear that it confirms nearly every theory I've proposed and every rant I've raged over the past five years on STB. The markets are completely controlled. Of course if they control the financial system this leads to question, what else do they completely dominate and control? Defense, medical, food, oil, electricity - are you starting to get the picture? This all leads to the question of constitutional freedom and liberty. This leads to the police state, the NSA, DHS and FEMA. This all leads to the administration and congress. And it was all enabled by the Patriot Act. We've come full circle.

Welcome to the end game. Their final pieces to the puzzle are being put in place. Seriously, they allowed a woman, well Zero Hedge put it best - "this certified commodity market manipulator just got a job with none other than the head commodity regulators in the US? ", from the bank that paid over $25 billion in
corruption related charges to now head the CFTC? You have got to be kidding me?

The new normal, we talk about it all the time here at STB. This is not your father's market anymore. Nothing is real and the Matrix jokes are not that funny anymore. Is anyone questioning my "event" call from 2009 now? "They" are and have been in total control since they blackmailed congress for TARP. The TBTF banks have only gotten bigger and the "controls" that Dodd/Farce were to put into place (that the TBTF's wrote) have not even come close to being implemented.

We can place the blame in many places. Great revolutionary leaders warned and spoke of this exact scenario. Bottom line is greed and corruption dominate the system. America as we know it is dead. Socialist rule is being implemented. Get used to it. #sochiproblems is our destiny. Better yet, prepare your children for it now. They are the ones that will be paying for all this mess.

Sticking with the corruption theme, and adding a bit more proof (not that it is needed anymore) to my corruption argument - What Did Gold And JPY Know Seconds Before The Jobs Report? You know, why do I even bother to do this anymore - what's the point? I could have very easily for the past two years typed, "Follow the Fed." and left every post at that?

I play the game because I honestly believe that price and technicals WILL get it right. They can not run from price and true natural market forces. Just like we can't screw with mother nature, well the markets have natural forces and rules as well and they will impose their will at some point.

Minis 4hr - All I can say is "whatever" after the jobs report. What a friggin joke, and americans put up with this shit. Unbelieveable! 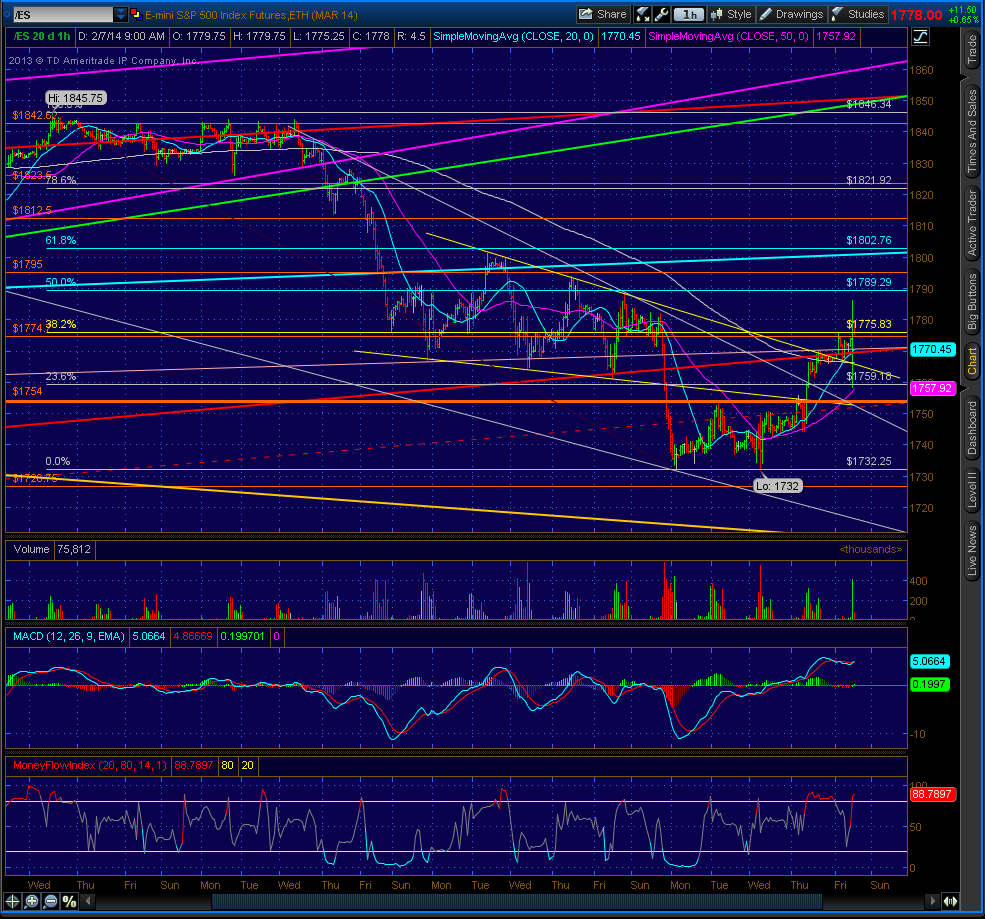 More to come below when I get calmed down and my thoughts secured. It's complete BS.