After Yellen yesterday, I'm left a bit speechless. Not sure why. Nothing has changed, and nothing will change. There is one path only now. I'm pretty sure that for some time everyone has known that it makes no difference if they try to fix things or not. Either way complete financial destruction is immanent.

The path is set. You can see it clearly in the actions of both the Fed and the government. The Fed continues on the course to financial ruin, while the government furthers its nanny/police state total control grid. Time is the only element that matters now for them and us. About the only question left is how long can they keep us distracted and believing we still have individual freedoms?

Fortunately more sheeple are waking up everyday to the new normal. The IRS, NSA and various other scandals combined with the mounting debt and faltering economy are actually providing a common ground for the conservatives and libtards to stand on. Common ground, coming together, is not what the government wants. As one we can defeat them (or at least slow them down), divided (see the popular results of the last election) the have us right where they want us.

It's becoming blatantly clear the end is near. For goodness sakes they were about to try and put FCC monitors in national news rooms to control news on a "need to know" basis. And some still believe what they hear from the MSM? The 4th Estate has been occupied, and all that's left is the alternative media to disseminate the truth. Sadly that can be turned off with the flip of a switch. You do know that propaganda is now lawful in the US? That's right, the Current congress, yes, the one with the 9% approval rating, repealed the propaganda ban last year.

Thanks to what's left of the Constitution (we still have guns - thank you founding fathers) we still have it better than the rest of the world, but what we do have left we're losing fast. Listen carefully to what they say. Read the alternative media. Heed everything you see here and in the comments section. Wake up to what's going down around you. Time is running out, and you will have to make the decision. Either you will make a stand and be part of the solution, or you can be another sheeple and be absorbed into the entitlement state. Either you are a patriot (now deemed a terrorist), true to the Constitution, or you are an entitlement slave subject to their socialist rule. You have a choice to make and not long to make it.

RUT Weekly - LOOOOL. One thing of interest is that the 38% retracement, the 200wma and the prior ATH levels all are coming aligned. Dig the neg divs in the MACD hist and the MFI. I have to ask, does that look like the greatest bull trap run of all time to you? 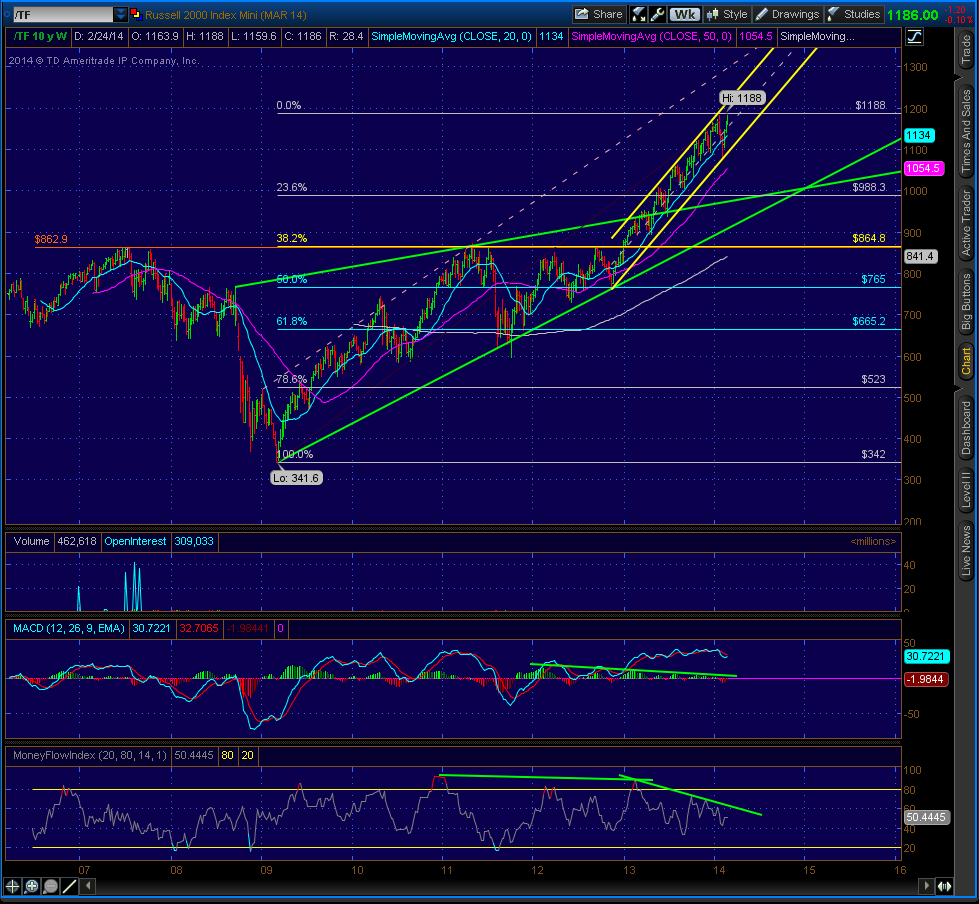 NDX Weekly - Are you serious? they are actually overthrowing the channel resistance? Can you say arrogance? Another question, is the MFI busted? 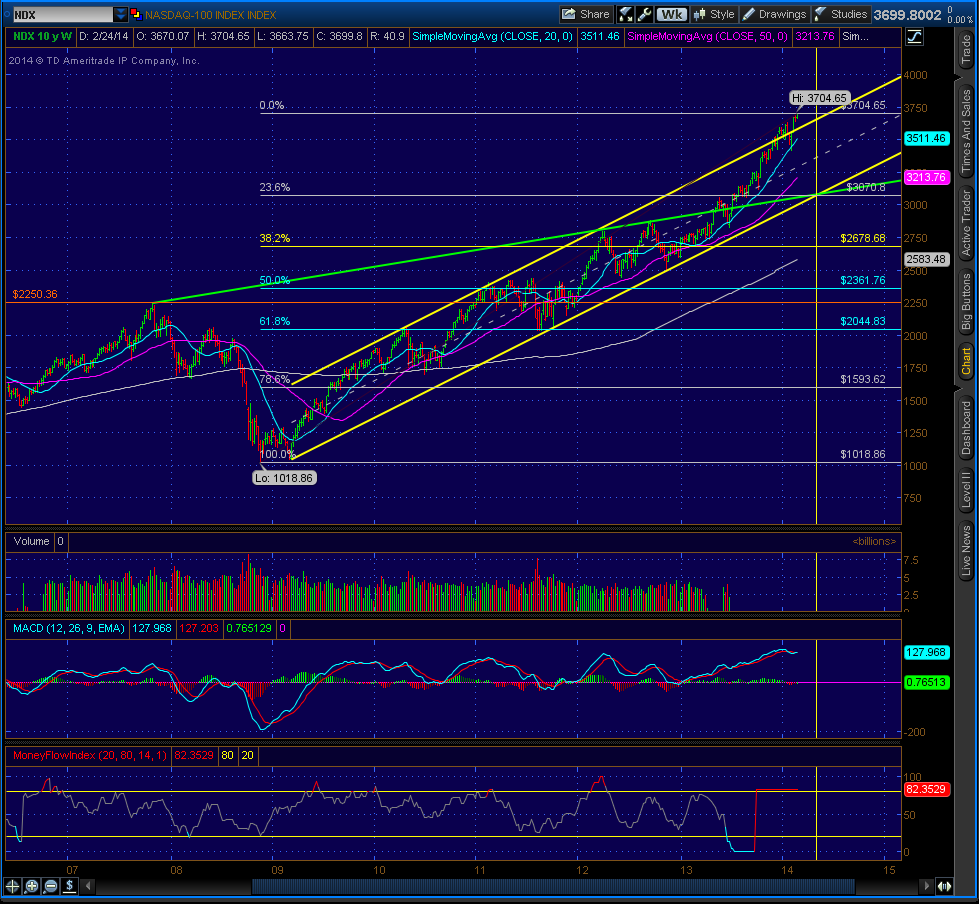 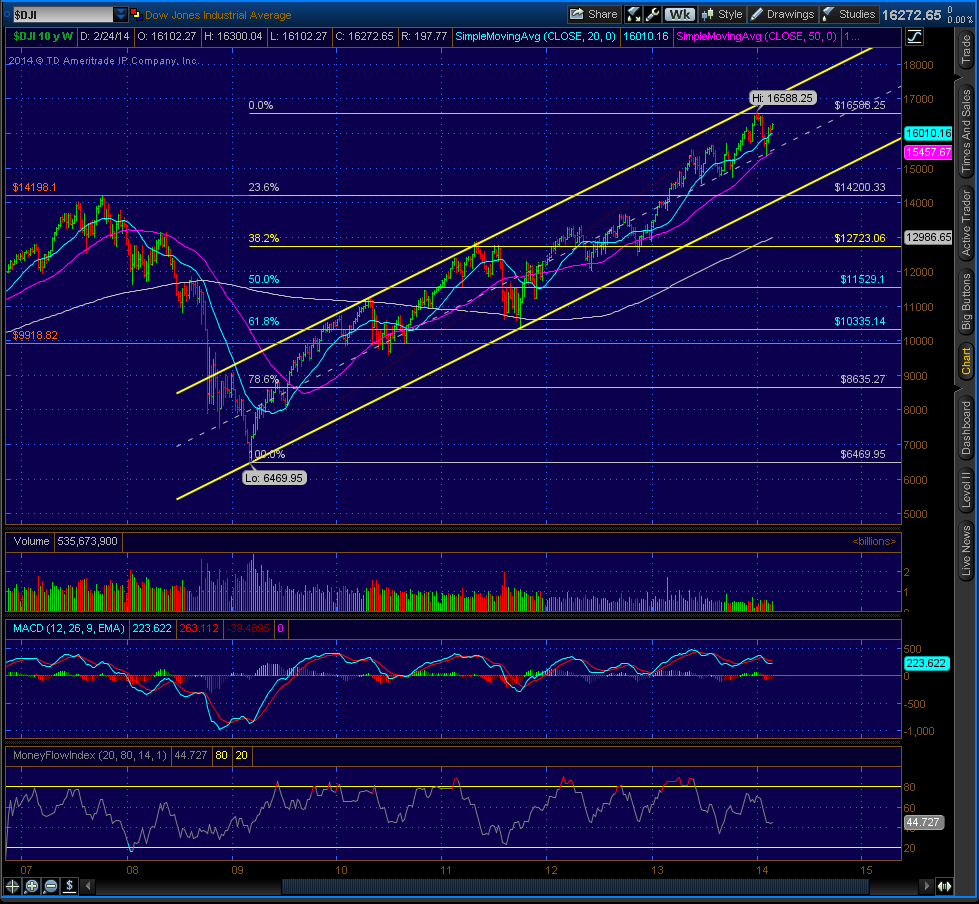 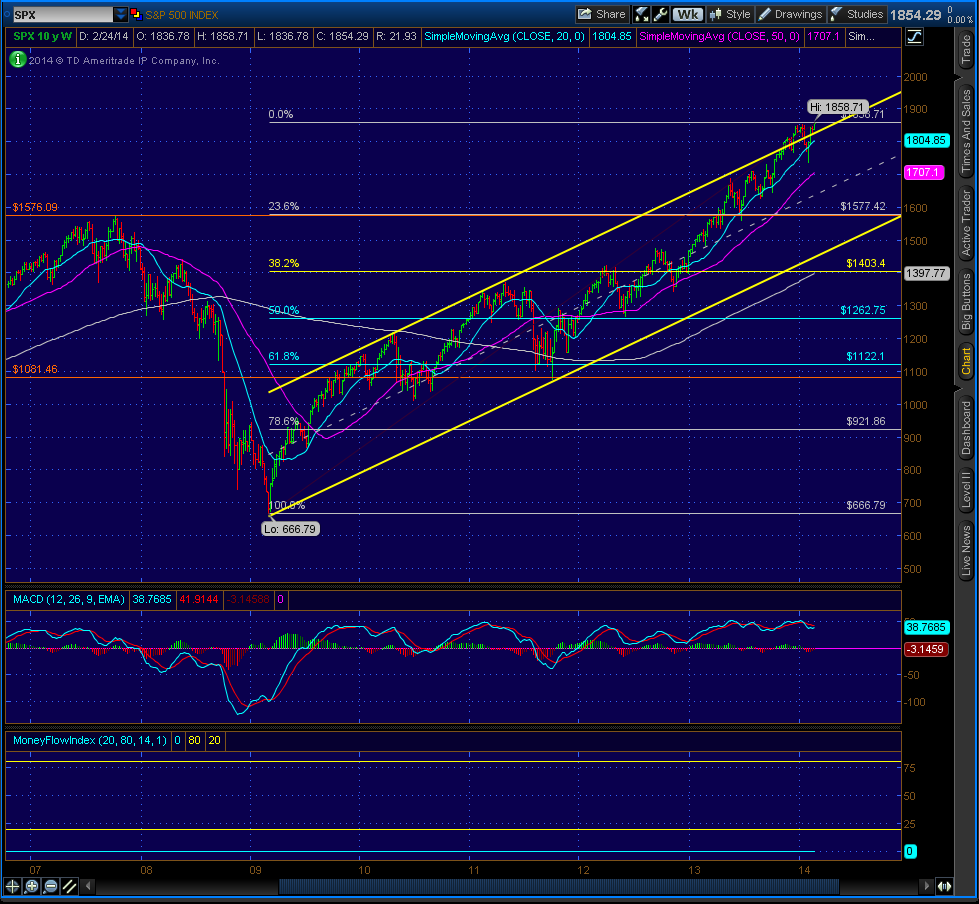 You draw your own conclusions as to if we're near an end game or not.


Have a good weekend.