Well, we thought the markets would be down on credit issues out of the EU this morning and they were, till government sponsored ADP report came out blaring some BS 325k jobs surprise. You gotta do what you gotta do to protect those revenues don't cha ADP? This farce will end horrifically when the truth is finally revealed (but living in a socialist state built on lies and deception you can't count on that happening anytime soon).

The take on ADP report from ZeroHedge, "Oh, and proving the "validity" of the data is that the number was about 8 standard deviations above consensus - aka statistical noise." That can be compared with other recent data points that have been statistically off the charts meaning to STB, they are more desperate now than ever to manufacture deceive hide conceal promote the truth that this economic recovery ain't happenin.

You see what was supposed to happen this morning is the bond auctions across the EU were to have a tough time, and the EU crisis was to move back to front and center of market mews. What happened there? Well the French and Hungarian auctions were miserable to say the least and markets there and here were reacting accordingly, till they pulled the ADP rabbit out of the hat. Remember they have warned that they will use whatever tools they have available to keep the markets afloat. I guess data manipulation is the cheapest, most convenient and timely mechanism they have.

Earnings are starting to mess things up a bit as well. TGT missed sales estimates horrifically and MON (the devils right hand) beat amazingly. Folks if there is one company other than GS we need to do away with on this planet it is MON. They are ruthless evil people driven to control the world's food supply destroying everything natural to the earth as possible. They are bad bad bad people.

Earnings kick off Monday will AA, so expect some wild action coming soon. Remember earnings are another tool they use to manipulate the markets. If you think analysts put out honest "projections" and price targets, you need to wake up. They are low hurdles that should easily be beaten or met to fuel price surges and support markets. I bitch about this 4 times a year. More on this to come.

The next few weeks will be tough to forecast. We all know the need for stimulus is greater than ever, but with market valuations at these levels they can't deliver the goods. They need a crash (STB has been on this theme since June). One is coming sooner that later I believe. Will the financials pull another Repo 101 out of the hat and make projections or do they fail and the market fails with them? We all know this game revolves around the Fed and the central planners. When will they be ready to manufacture the next move south? Really tough time to be prognosticating right now.

SPX 60m - I still like this chart the best of all right now. 1235 first target then 1220 (yellow box). The 60m time frame has been working great lately for timing and, I'll stick with that till it breaks. 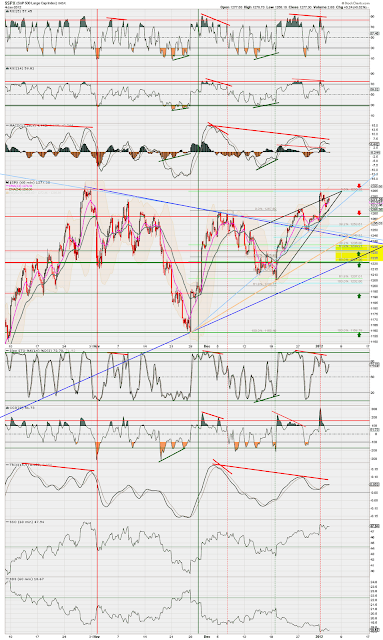 Minis /es 4hr - This chart is a bit more detailed being a trading chart that I use. Also the minis are much more accurate tracking price movements. If you can see it, we had a green falling channel and then a rising blue wedge that has busted. That rising blue wedge could also be a unconventional yellow channel (ignoring the move to 1195) up which price bounced off support this morning. Sorry I can not clean this chart up anymore as each diagonal is necessary. I have spoken of wads of support points under price at this level. I count 7 between here and 1207. 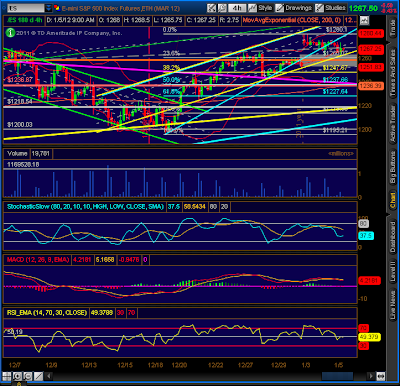 My best guess is that we get a pullback soon to work off the 60m divergence. I was disappointed we did not make 1257 support yesterday. It looks like 1264 may be a new support area on the minis. I'm still looking at my FOMC meeting chart contemplating some sort of move north till the end of this month, but relying on that alone with all the earnings noise to come is dangerous. Add to that the daily divergences are screaming a larger move south should be upon us sooner than later. Heck, bottom line is what do the Central Planners want the markets to do. If you think anything happens without purpose in the markets today you are a fool.