What can I say, emotions are thru the roof. It has been some time since the rhetoric across the financial blogs has been this testy. It is even bleeding over to the MSM (who are learning that the web is the best source of real information). Call it consensus disbelief.

It actually may be worse now than anytime in the past as even more have bought their tickets and are on the HFT/QE manipulation train. Even more are on the "we're all gonna die anyway so why are we bailing out everyone so what does it matter anyway" story, so why the rampage?

Those situations make my blogging a bit easier as I have been on the manipulation train and preaching it for years. Some thought I was nuts (some - the lost - still do). The sheeple and even some major players are coming around and beginning to voice their disbelief which is quite the change of events.

Complacency? Read this and pay note to the tidbits from Rosie. "With a couple of breadcrumbs, a sprinkle of "hope" and a cup of optimism - analysts, economists and investors have whipped up the perfect concoction by extrapolating recent upticks into long term future advances.  However, this is a game that we have seen play out repeatedly before." Guest Post: Complacency Risk Is High | ZeroHedge

Why has all this disbelief set in from those that have a clue? Well if you will please take the time to look at just the charts in this post you will get it. "How does the current recovery compare to those of the past? The following charts from the Council on Foreign Relations puts the current (un)recovery in context and despite some apparently bright news recently, the pictures underline the economy's weakness since the NBER's recovery began in June 2009." Charting The US (Un)Recovery | ZeroHedge

How far gone is the system? Well, to use the term dislocated may be kind. Watch the interview in this video. Some think (as I have no doubt), "“We now have an entitled class of Wall Street financiers and of corporate CEOs who believe the government is there to do… whatever it takes in order to keep the game going and their stock price moving upward,”" Stockman tells Moyers. Mish's Global Economic Trend Analysis: Crony Capitalism and the Entitled Class of Wall Street Financiers; Bill Moyers Interviews David Stockman, Ronald Reagan's Budget Director

So what is there to stop the crony centrally planned system? In a reaction the the O-MFG event that is still unresolved, "I think the search for a silver bullet is probably futile," Roth told Reuters from his Chicago office. "If someone wants to break the law, you can't prevent that without sitting with them 24 hours a day." No silver bullet to avert another MF Global: regulator | Reuters and you know this administration will not prosecute any wrongdoing.

This post kind of says it all and explains )(to some degree) why we're on the path we're on - if they stop spending it all blows up, but if you stay on the same path it blows up anyway. Pretty simple when you think about it. If The U.S. Government Keeps Spending Money Like This We Are Doomed And If The U.S. Government Stops Spending Money Like This We Are Doomed

If you missed this video in the Weekend Post please give it a listen. This may be our future.

In another incident of a global move away from the dollar and into other forms of currencies to back transactions (this is bad) - India to pay gold instead of dollars for Iranian oil. Oil and gold markets stunned DEBKAfile

SPX 60m - I'll stick with this one for this evening. Not much changed from this morning. The chart needs little explanation. the red wedge is ending and if that is not it the bears will have to suffer a bit longer while the black one plays out. I'll do a full TA post in the morning covering everything. 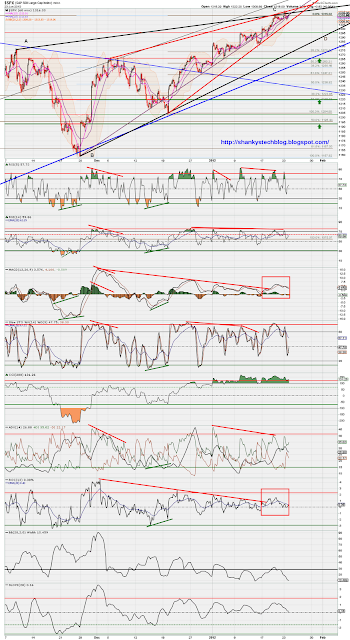 Watch the video in this one. Voter fraud goes from conspiracy theory to reality as, "The Associated Press reports that South Carolina’s attorney general, Alan Wilson, has notified the U.S. Justice Department of potential voter fraud in the Palmetto State this weekend." » Voter Fraud: Dead People Cast Over 950 Ballots In South Carolina Alex Jones' Infowars. So if you have several dead relatives and want to cast more than one vote and you live in New Hampshire - go for it!

Things really heated up this weekend and that 6 month time table that Obummer was looking at just got met by the EU embargo (remember if too early before the election he'll lose all sorts of momo from the war - the timing on this thing has to be just right for maximum political effect). Follow the links as they lay out the most relevant and recent developments -

"The measures include an immediate embargo on new contracts for crude oil and petroleum products while existing ones are allowed to run until July." European Union agrees on Iran oil embargo - Telegraph Note that end of July date and remember it. This gives them some time to saber rattle and turn the screws a bit.

Then Iran Fired back, "Following the agreement reached on Monday, Iranian lawmaker Mohammad Ismail Kowsari, deputy head of Iran’s influential committee on national security, said the strait “would definitely be closed if the sale of Iranian oil is violated in any way.”" Iran Vows to Shut Down Strait of Hormuz as EU Passes Oil Embargo Alex Jones' Infowars

This is some real escalation. "Reuters report that the EU has agreed to freeze the assets of the Iranian central bank and ban all trade in gold and other precious metals with the Iranian Central Bank and other public bodies in Iran." Currency Wars - Iran Banned From Trading Gold and Silver | ZeroHedge

Yes, I'm a birther and I'm from Georgia, so this is doubly good for me, "A judge has ordered President Barack Obama to appear in court in Atlanta for a hearing on a complaint that says Obama isn't a natural-born citizen and can't be president." Ga. judge orders president to appear at hearing - CBS Atlanta 46

So how bad is it when the TSA starts to want to pat down US Senators? Kentucky Senator Rand Paul was briefly detained this morning after a standoff incident with TSA officers In Nashville. » Alex Jones' Infowars

Fukushima (it won't should not go away) -

You need to read this. Fukushima Cover Up Unravels: "The Government Can No Longer Pull the Wool Over the Public’s Eyes" , "The repeated failures have done more than raise concerns that some Japanese may have been exposed to unsafe levels of radiation in their food, as regrettable as that is. They have also had a corrosive effect on public confidence in the food-monitoring efforts, with a growing segment of the public and even many experts coming to believe that officials have understated or even covered up the true extent of the public health risk in order to limit both the economic damage and the size of potential compensation payments."

Bonus Coverage! - For those of you into chemtrails or for those that don't believe they are spraying stuff in the skies that we don't know about check this out.