For those looking to know exactly what's going on with the market please see my morning post from today. It is as comprehensive as you will find anywhere. We're nearing a major top. To all the bears out there, as I have preached from the beginning of the year, patience is required.

Following the Fed is the only plan and like a scratched record (for those of you old enough to know what one of those is) I keep repeating the FOMC Meeting Chart. Price today (for whatever reason) tagged the upper resistance diagonal and has met the price objective I thought would be "it". Price actually touched the side of my target circle I drew a few weeks back.

I have no idea what is driving the markets up at this point other than IMF or ECB lending and the hopes that the Greek default will come off without a hitch. I do know that something is not right. One of the theories is (in true bubble fashion) is that the funds rapidly leaving the EU are flowing into our stock market. On the other hand mutual funds are having a net outflow. Could it be unannounced stealth QE? The Fed did say they would use all "tools" at their disposal. Could it be the promise of more QE announced at the FOMC meeting next month? Who knows?

One thing for sure is the markets are acting like everything is normal and there are no issues that should derail it. Forget that we're over the debt ceiling AGAIN and that congress just voted (like tonight) down another extension. This will become a massive political hot potato and should develop into a major issue the way it was last August. You do understand this right? Our government is open only because they have stopped funding the pensions of their employees to keep the doors open AGAIN! I could go on and on here as you know, but let's not tonight.

I will go into the fact that the markets are having a record start to the year while earnings season thus far has been a massive disappointment. That should be enough alone for you to be knowing something is not right. Folks, something really is not right.

There is no good news. Bottom line is adding more debt to solve a debt crisis is simply not the answer, but it is the path we (well, the Fed with our money) have chosen. Denninger's take on the IMF proposing to raise its lending capacity by as much as $600 billion to insulate the global economy against any worsening of Europe’s debt crisis is simple, "There is only one way out of this mess: Governments must stop spending more than their citizens are willing to pay in taxes, and accept the temporary, albeit painful contraction back to sustainable levels of economic output that must occur." Market-Ticker

You see the treasury situation (that you never hear about in the MSM) continues to worsen. Let me briefly explain this again - the global Ponxi system - they buy our bonds, we purchase their goods with that money and the funding circle is complete - when they stop buying our bonds and become net sellers the circle breaks and we start PRINTING to make up for that shortfall. You need to see the charts in this post - China Brings US Treasury Holdings To One Year Low, Russia Cuts Treasury Exposure By 50% In One Year | ZeroHedge. This is not good when your nation's debt to GDP is over 100% and rising. That is DEEEEEP in the hole.

I often discuss corruption on the board and in the posts. Some dismiss these views and simply skim over the topic. Well it is time to wake up and face the reality that our government is corrupt and at this time is doing everything in its power to stave off a financial collapse that will be beyond historic. If you don't think your government is corrupt listen to this video with the convicted Jack Abramoff once the most powerful lobbyist in Washington. 'Congress corrupt to core' - US lobby probe scapegoat - YouTube (if you are lucky you get a sensational Ron Paul add before it).

What's coming here will more than likely be a repeat or worse than the August debates over the debt ceiling that led to the woefully ineffective super congress. Bottom line is after all the hoopla the politicians simply kicked the can to the next round of elected officials who come in in 2013. This has now become a political football that will reveal Obummer's failures as a leader.

Sabre rattling or not you still have to listen. Bottom line as discussed here, Obummer needs a new war and it can;t happen this far from the election, so they pushed back the time table about 6 months. "Iran might pound Persian Gulf cities with ballistic missiles and use swift boats to attack American war ships in an attempt to dissuade a U.S. attack on its nuclear arms sites, a new report states." Iran Threatens U.S., Persian Gulf Cities with Missile Attacks - US News and World Report

See the election note above - he's now lost all control and because his spend and don;t cut policies he's now gonna be roasted by the republicans.

SOPA DAY! Here are a bunch of links for you to follow regarding SOPA. SPOPA is yet another attempt (following on the heals of the NDAA) to give the government the power to quiet our voice and control the populace. SPOA is basically the right for the government to police the internet just like China.

"Lieberman characterized fears that the US government would use such powers to censor political content as “total misinformation,” yet goes on to admit that the purpose behind the agenda is to mimic China’s ability to “disconnect parts of its Internet in case of war,” adding, “we need that here too”." The Secret Behind SOPA Alex Jones' Infowars

Sign the Google petition - I did - End Piracy, Not Liberty – Google

The best SOPA protest on a site I found today - TheOatmeal.com blacked out in protest of SOPA / PIPA - The Oatmeal

Chart of the Day - My working/trading SPX chart for a more detailed (and different) look than the usual. Overbought at tons of resistance. 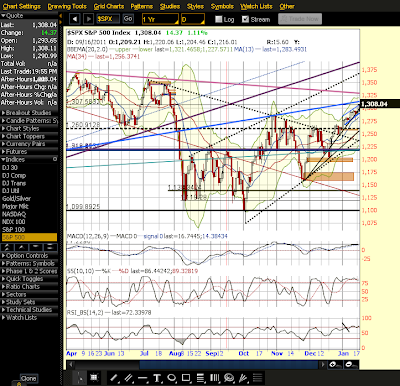