"RED ALERT TO EVERYBODY INTERESTED IN THE ESM: THERE IS NO CURRENT VERSION OF THE ESM TREATY AVAILABLE!!!

Europe's most important treaty on the European Stability Mechanism (ESM), which will lead the EU into a financial dictatorship, has been pushed through by EU finance ministers late Monday evening.

But the latest version of the ESM cannot be found on English and German EU websites. A link on consilium EU only leads to a 'file not found' message and the German EU website "Europa von A - Z" does not mention the ESM at all. This reminds one of the secrecy around the Federal Reserve Act, that was pushed through in 1912. Is the EU Commission now playing the same fishy game 100 years later?

Media reports from last midnight only said that the ESM treaty was agreed on by EU finance ministers and mentioned January 30 as the date when the treaty will be officially signed."

Of course the markets do not care about such things as liberty and freedom, those are purely secondary items to the big grab and perpetual printing. This will most likely be another banksta/elite/central planning favored treaty that further en debts the sheeple to serve the system (dent slaves) that favors the richest of the rich and their henchmen.

Of course corporate controlled media will spin it as the savior of all things and the one solution that will end the crisis. We all know that is a bunch of crap and there is no way out of this debt crisis and this is just another mechanism for controlling the sheeple and further tying their taxes and labor to serve the crony capitalists.

This flows nicely into the Bruins goaltender and playoff MVP skipping out on the white house ceremony. Tim Thomas' statement for why he was not there,

""I believe the Federal government has grown out of control, threatening the Rights, Liberties, and Property of the People.

This is being done at the Executive, Legislative, and Judicial level. This is in direct opposition to the Constitution and the Founding Fathers vision for the Federal government.

Because I believe this, today I exercised my right as a Free Citizen, and did not visit the White House. This was not about politics or party, as in my opinion both parties are responsible for the situation we are in as a country. This was about a choice I had to make as an INDIVIDUAL."

Barack Obama honors Stanley Cup champion Boston Bruins; Tim Thomas a no-show - ESPN Boston (The comment stream has over 5,000 entries and is the most disturbing thing I have ever read - I may have to do a post on it later).

We should all applaud Tim's effort here to make a statement that is resonating on the MSM and thru the web. His unselfish gesture is so spot on and speaks the truth, that (as stated and proven here on STB daily) governments are out of control. We the sheeple have lost all liberties and freedoms. They have been stolen (literally) by the special interest groups that control everything. Not until many many more like Tim speak up and make their voices heard will the tide even start to turn back to the sheeple.

I will not listen to the state of the union address tonight, as I find listening to him nauseating and a complete waste of time. The lies tonight will be astounding I bet.

AAPL after the bell tonight. MCD beat which is no surprise. We're almost there folks. the market may have topped yesterday, but I want to get thru the Fed news and AAPL before I go out on any limbs. Right now it looks like it topped yesterday. 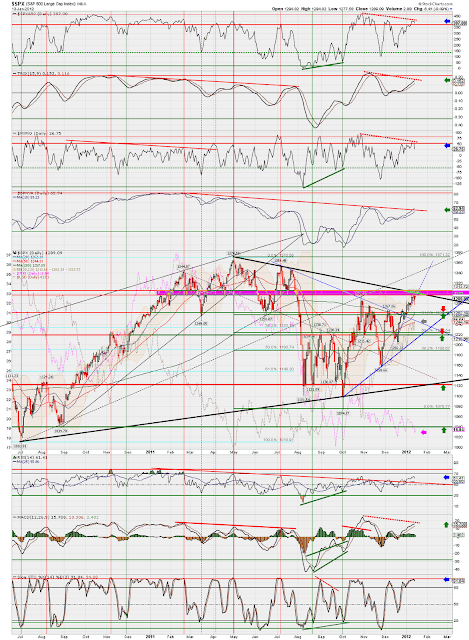 Minis 30m - This chart has been amazing for over a month now. The lower green support is being tested. If that cracks I believe the odds of a top being in are quite high. The fall should be swift. As indicated in yesterday morning's post the COMPQ has 44% air (gaps) under it off the last major low. 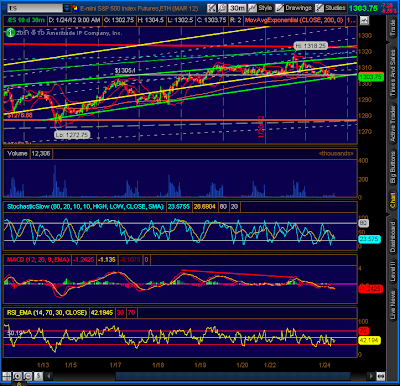 Get me thru the FOMC and AAPL  and then I'll release the full bear that is begging to come out of STB. As I preach, the form of the fall will be all important. Gaps, impulses, big reversal candles, busted support and backtests - all are things that clue you into the price action. It should be fun for the bears soon.