The market news was really slow and market action even slower today. I guess after all the Iowa hoopla last night the only good news (not for Obummer) I could find to report today was mostly political. Congrats to my man Ron Paul for hanging in there proving he's a real contender that needs to be taken seriously no matter how or where they counted the votes.

One thing that is for sure is that this will set up to be a really strange year regardless of the Mayan Calendar or not. The election in November will top the charts most of the year. A market crash or two will happen. Record deficit spending will keep us all distracted from the real problems of the day. A few countries will default on their debt. Heck, that will all be routine stuff, for the really interesting things take a look at No Mayan Apocalypse in 2012 … But There’s Alot of Other Interesting Stuff Happening from Washington's Blog (whom STB thanks for its recent inclusion in the blogroll).

OK - this is the most important thing you will read today, cause if the markets are down at the open you will know why - the EU credit risk is back on in full force - Hey, you will know something your broker won't. Call him and explain it to him in detail after reading this and the next paragraph! European Credit Markets Tanking Ahead Of Key Issuance Day | ZeroHedge Remember, the bond markets always lead (they are the smart ones).

OK, just read this one and then try not to panic. I've been discussing liquidity issues for some time as the "big one" in the EU. I've also been banging the drum as loud as possible that Greece is just a conduit (much like AIG was after the crash with TARP funds) to keep the rest of the EU alive. Read this carefully - "The fact that NBG is the “book runner” of this bond is further demonstration that no real account bought these bonds – back when NBG sold actual bonds to actual institutions it hired banks like DB to lead the deals for them.  As further evidence of the “special nature” of these bonds is that the “Collateral Type” is “Govt Liquid Gtd”, which means the Greek government guaranteed these bonds.  So just like the Italian bonds, NBG issued these bonds to themselves, got a Greek government guarantee (how can a country that can’t borrow, provide a guarantee?) and took these bonds to the ECB to get some financing.  The ECB won’t buy National Bank of Greece bonds directly, they won’t buy Hellenic Republic bonds in the primary market, but they will take these ponzi bonds as collateral? Would A Ponzi By Any Other Name Smell As Bad? | ZeroHedge. Yup, things are just fine over there. No need to fear a default or collapse as long as this type of chicanery is going on.

Great news for those of you owning long legacy low cost basis (LOL - like that means anything now that you have been diluted to death) BAC - "Specifically we are looking at Bank of America, which with a forecast surge in Earnings from ($2.5) billion to $10 billion accounts for 14.1% of the entire change in S&P earnings forecasts." Stunner: Bank Of America Responsible For 14% Of Projected 2012 S&P500 Earnings Growth | ZeroHedge. Now the bad news for the rest of us - oh - you just got that. Two words - good luck!

The best news of the day comes from south of the boarder. This is really comforting considering his 70 to 80% hit rate. "Mexico's Grand Warlock predicted US President Barack Obama would fail to win re-election and two more Latin American leaders would be diagnosed with cancer, in a traditional New Year's forecast Tuesday." Mexican Grand Warlock predicts Obama loss in 2012

I think he's pissed. Looks like the next Apprentice will have to compete with the gloves coming off as the Republicans bash themselves into oblivion. Sorry Donald, you lose again. ""But I do reserve the right to tell the truth. And if the truth seems negative, that may be more a comment on (Romney's) record than it is on politics," he said, vowing to strike back by challenging Romney's conservative credentials in the weeks ahead." Gingrich still alive after Iowa, plotting revenge | Reuters

Is there trouble in paradise? Biden out and Clinton in? STB has been asking this question (or even if Clinton would challenge Obummer) for some time now. Press Questions DNC Chair: Will Obama Drop Biden for Clinton? | The Weekly Standard

Houston, we have a runaway president. This is serious stuff. Folks this guy is bad news. On Obummer's appointment yesterday of Richard Cordray to be head of a controversial consumer consumer financial protection agency, "Speaker Boehner called the appointment an “extraordinary and entirely unprecedented power grab,” and noted that the position “had not been filled for one reason: the agency it heads is bad for jobs and bad for the economy.” Unprecedented “Recess” Appointment Contradicts Obama Justice Department

OK, now listen to the man answer the following question. "When Congress offers you a bill, do you promise not to use presidential signage [sic] to get your way?" Obamateurism of the Day « Hot Air

I have referred to our fearless leader as the Rodney Dangerfield of presidents. I guess when you top the "jokes about you" list maybe I've never been more right (duh!). "But when it came to the top target of the 2011, Obama and shamed former New York Rep. Anthony Weiner came in first and second. Obama was gored by 342 jokes, Weiner 220." Study: Obama Is Late Night's Biggest Joke - Washington Whispers (usnews.com)

I am not even gonna comment on this one - Michelle Obama Jokes: "I Kind Of Like" Being Called "Your Excellency" | RealClearPolitics - Ok, I can't resist - I wonder what they are calling her in Hawaii now that she's gone?

Yes, I am a birther. Sorry if that disappoints some of you, but the man needs to present a valid birth certificate and not the one proven fake by numerous sources. From the home state of Georgia (you see, us southerners do have some sense) - "Birthers are hailing a decision by a judge in Georgia that could see Barack Obama struck from the presidential state ballot if Obama fails to prove that he fulfills the ‘natural born citizen’ constitutional requirement to be President." Birthers Hail Judge’s Decision That Could “Depose” Obama Alex Jones' Infowars

This section could have been even larger today, but I'll spare you (and save the ammo for another post).

All quiet on the Western Front today.

To all of you storing photos on Picassa or elsewhere on the internet or on a cloud or on Facebook - you are being scanned and they know (literally) every inch of your face. ""One of the things that we learned at the workshop ... is what are the privacy concerns here and are the technologies currently being implemented in a way that raises additional privacy concerns or are they being implemented in a privacy-sensitive way," said Koulousias. "And since we don't fully know the answers to that, it's very hard to predict where we'll go."" Facial recognition technology poses privacy concerns - FederalNewsRadio.com

I really think you need to read the morning post to see what I'm really thinking. Right now it looks like they will support the market into the FOMC meeting late January possibly ignoring the current sell signals on the 60m chart. Or the 60m sells off and then it rallies to the FOMC meeting. Calling a rally here is a dangerous task as if you look at the daily chart below, it has sell signals all over it. Very weak position for price right now at the double top. 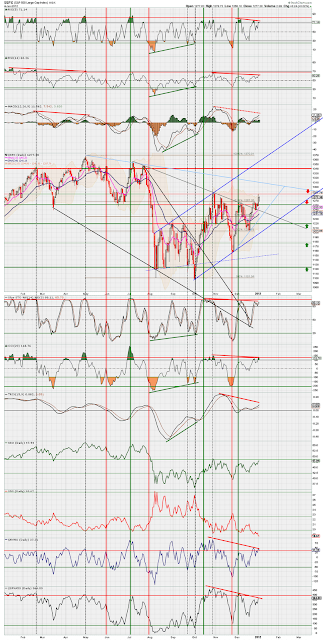