Because of yesterday's debt rant (Total Despair), I got a little behind on the AD links. Today you get AD extreme. I'll try to keep commentary limited. Enjoy!

STB has liked 1040 as an SPX target since the June top. I always appreciate others looking in that direction (and if the Fed would just get out of the way). The Cost Of Recoupling: 235 S&P Points | ZeroHedge, looking at 1050 fair value based on the EUR/USD.

Intervention? Nah, no country would just print money and dump it on the markets just to prop things up to make things look better than they really are, that's silly. Well, is it really? Bank Lending, M2 Money Supply Soar in China; Premier Wen Jiabao calls for "Measures to Boost Confidence in Stock Market"; US vs. China Money Supply - Who is Printing More? Mish's Global Economic Trend Analysis

In a must read for proper perspective 50 Economic Numbers From 2011 That Are Almost Too Crazy To Believe. My personal favorite, "#6 There are fewer payroll jobs in the United States today than there were back in 2000 even though we have added 30 million extra people to the population since then." Well done Obummer!

O-MFG update - Very interesting - Very very interesting - "Last week, the New York Times reported that regulators investigating MF Global’s collapse had widened their inquiry to CME, whose exchanges were used by MF Global. The Commodities Futures Trading Commission has been probing the disappearance of some $1.2 billion in customer funds from MF Global. Now, it’s reportedly looking into the CME’s actions in the days before the Wall Street firm’s filing for bankruptcy on Oct. 31. The Chicago-based CME Group owns the Chicago Mercantile Exchange, the Chicago Board of Trade and the New York Mercantile Exchange." CME Shares Keep Falling In After-Hours; Is Breakup On The Table? - Focus on Funds - Barrons.com

This is really freaky stuff, glad I will not be around to see the end result - no wonder they want a killer virus to eliminate most of the population - Population: The Elephant in the Room; Peak Oil Implications on Population Growth; What Level of Human Population is Sustainable? Mish's Global Economic Trend Analysis

Shanky, eugenics? Really? Population control? You are pushing it now. ""Eugenics in the US is something that's still not nationally known. People associate it with Nazis; they don't realize that the US did it too," Rebecca Kluchin, an assistant professor of History at California State University, Sacramento, tells ABC News." US eugenics victims wait for compensation — RT. What was that about the killer vius they developed last week?

Paul places second in NH and the rest are doing Obummer's dirty work trying to take down Mitt. Right now it is looking like a total disaster for the republiCons (other than RP of course).

Other than parking a second aircraft carrier and the coming US/Israeli war games and the past Iran war games and the bombings of nuclear scientist by masked motorcyclists all is well - oh wait - Hyperinflation Comes To Iran | ZeroHedge "And so the opportunity cost for the Ahmedinejad regime to preserve its status quo gradually grinds to zero, as the entire economy implodes (courtesy of a few strategic financially isolating decisions) making further escalation virtually inevitable, in a 100% replica of the US-planned Japanese escalation that led to the Pearl Harbor attack, and gave America the green light to enter the war."

Want to know almost everything you need to about the coming war with Iran? Read Guest Post: Iran: Oh, No; Not Again | ZeroHedge

Uh, even if Obummer invites you, an invite to the white house is something you don;t turn down (well, I would), but to this extent? "A White House spokeswoman, asked about the 49 empty chairs, said some invitees didn't show up. "Like with many of these events here at the White House, we invited representatives from outside groups, businesses and community leaders involved in this issue to attend, and unfortunately some folks invited were not able to attend at the last minute," spokeswoman Amy Brundage said." Event more for media than CEOs? - POLITICO.com president Rodney Dangerfield is at it again.


And why are most reporters accused of giving Obummer a "pass"? Well after signing the NDAA throw this on the fire, Homeland Security monitors journalists — RT "Also included in the roster of those subjected to the spying are government officials, domestic or not, who make public statements, private sector employees that do the same and “persons known to have been involved in major crimes of Homeland Security interest,” which to itself opens up the possibilities even wider."

Of course the white house was not trying to keep things a secret - or were they - Depp, Burton not in W.H. visitor logs - POLITICO.com "The most transparent administration somehow forgot to log Johnny Depp coming to the White House?" said Republican National Committee spokesman Joe Pounder. "Apparently Obama's promise of transparency depends on the day, the event and what they don't want to disclose."

The video in this post is simply unbelievable - you have no rights anymore - In a Tyranny, Even Pointing Out the Fact of Tyranny Is Grounds for Harassment - Washington's Blog. "As may anyone who questions war, protests anything, asks questions about pollution or about Wall Street shenanigans, supports Ron Paul, is a libertarian or holds gold."

You have a brokerage account or a bank account right? Well did you know that your broker or banker is required by law to submit a suspicious activity report on you if you, say, do anything suspicious or else he can go to jail? Have you inquired with your broker if he or she has narked you out to the Feds? How do you feel that he/she has the obligation to nark you out? "A Suspicious Activity Report, or SAR, includes details of any transaction that may be deemed ‘suspicious’. Naturally, there’s no clear guidance on what is/is not considered suspicious. Banks, brokerages, money service businesses, precious metals dealers… even casinos are required by law to fill them out." Guest Post: Why 308,127,404 Americans Are Going To Get Hosed | ZeroHedge

Chart of the Day-

When the Fed does not want the markets to fall this is what happens (quite often actually lately). 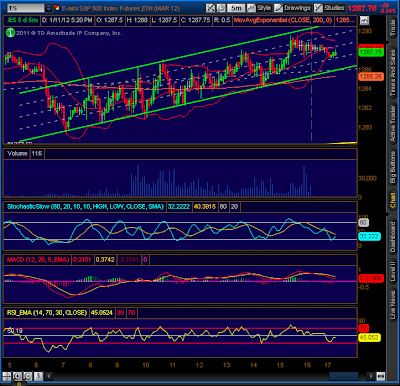 I also did an STB extra post today on Is Gold About To Collapse? you may want to see.