This is gonna be a summary AD - tomorrow is the big day. One way or the other we get clarity and the FOMC behind us. I've walked us up to this point and all that is left is the FOMC meeting (well, and that Greek thing that was supposed to be over by now).

AAPL blew out earnings. One of the reasons my shorts were on hold for the markets.  Earnings in general are miserable, but apparently earnings don't matter anymore (except for AAPL).

What will potus have to move the markets tonight? It will mostly be a bunch of crap to move the masses promising things he will never deliver on, but the sheeple will soak up and worship.

FOMC tomorrow is the biggie. It will most likely be a non event but an event none the less. They'll keep verbiage similar and reiterate a weak outlook is my guess.

The euro zone is spinning out of control. Everyone knows it can't be fixed and that it is only a matter of time before it implodes. The only question is when? I'll just regurgitate the zerohedge links for your consumption tonight. Linked and grouped they make quite an impression all in one place. They have been way to quiet for weeks, so I get out some frustration and deliver them all to you.

"The coordination of 17 disaparate nations leaves the former IMF man greatly concerned as the unique nature of this crisis leaves "four economic, social, and political events as possible causes of systemic collapse with each at risk of occurring in the next weeks, months, or years and these risks will not disappear quickly."" "Dreams Versus Reality" - Former IMF Chief Economist On Europe's Last Stand | ZeroHedge

S&P Warning Of Imminent Greek Default Again, But Promises All Shall Be Well, Dallara Speaks | ZeroHedge

And one last link -

"Joseph Granville, whose “sell everything” call in 1981 sparked a decline in U.S. stocks, said the Dow Jones Industrial Average (INDU) will drop toward 8,000 this year because of waning momentum and volume." Granville Says Dow Industrial May Drop Toward 8,000 in 2012 - Bloomberg The man has been calling markets for over 50 years and he says volume is the key and that things are gonna get really ugly.

Buckle up. Tomorrow may be a wild one.

Since it will be the last time for a while, because I know you will miss seeing it and because it has been soooo good to us for well over the past month -

FOMC Meeting Chart - I may have to pull it out one more time in the morning - who knows?

AAPL - Pushing the envelope - That wedge is ending - it may take 6 moths to play out, but it is ending. The pop tonight really did not abuse the upper diagonal all that much and could be considered the start of a throw over of the wedge. 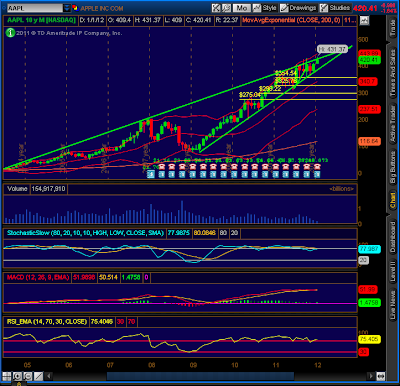