Is Gold About To Collapse?

Hey, goldbugs, I'm just looking at the charts. I still think gold will go over $5,000 so don't get your panties in a wad. Part of what I'm theorizing is that when the markets finally collapse all asset classes get crushed initially, then ALL the money begins to flow into physical gold and silver. Right now there is no doubt that gold is still overbought (technically) and could use a correction (the current 400 points is only a partial correction). Silver has been pummeled, so why can't gold play catch up? There are natural support levels set where China and Russia first started coming in as bigger players near 1,100 or so. Let's take a look.

First monthly (/yg) 10 years. $270 is where we start this venture. From the low to high of $1,927 that would leave the Fibonacci retracements as 38% 1284, 50% 1,095 and 62% 905. OK, let's eliminate that 905 from the discussion now, not gonna happen although that long term green support diagonal off the lows as ultimate support would make a tasty target wouldn't it (if it did that upper blue resistance diagonal would have to hold and it would hit in March of 2013 - even tastier if you like the global collapse to happen this year). Please note the MACD at extremes and about to bear cross. Also note the falling S Sto and RSI. These should not be taken lightly on a monthly chart. 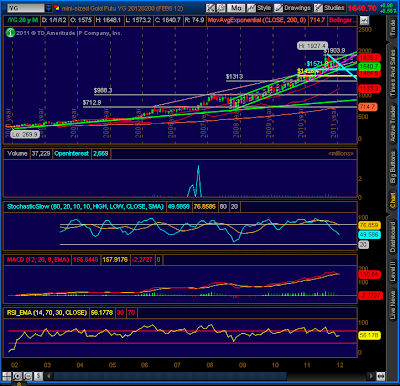 Here is a weekly chart that gives a closer look at the channel run in price from 2008 till it overthrew channel upper resistance last year. Note that spike followed the first failed debt ceiling debate and the end of QEII. 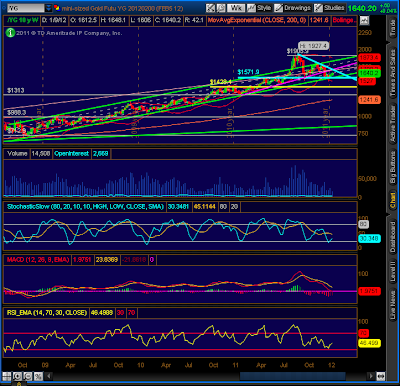 A closer look at the weekly chart shows what has my interest spiking in a possible move further south in the price of gold. Price has formed a descending triangle. Last week price bounced literally off the point where 1571 support and long term channel support meet. That was a major support point. Now comes the big question, will price continue either A) up in the long term green channel or B) continue to consolidate in the blue triangle and eventually take out support and begin a more severe move south? (that would have the bottom falling out in late January thru mid February) 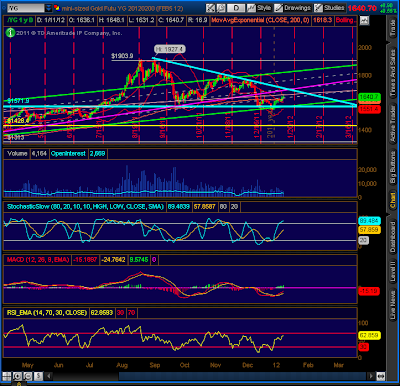 The arguments for both are valid. The up side - Physical gold and silver will be the only things worth owning in a year or so as everything based in fiat (dollars) will be baseless, with financial destruction coming and throw a war or two on top of that gold should continue the rise. The down side - It is overbought and technically signals are there for a sell off, but more importantly gold is possibly the most manipulated PM on the planet and there may be forces (that for years have) that would like to see it lower before the price move up becomes uncontrollable.

Measuring that descending triangle you get a target near 1217. Does gold reach for its weekly 200ma near 1240 before moving higher? That monthly long term 38% retracement is 1284. This leaves 1217 as a very digestible target and well within reason. That monthly MACD and the falling weekly indicators still have some room to run still.

The daily chart shows a slight oversold price at double support with a diverging MACD (bullish). Here you get a great close up at the channel and the triangle. 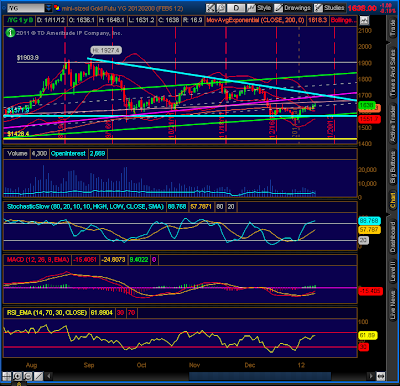 So, right or wrong, like it or not, I just present the possibility that if gold should breakdown the 1220 to 1250 area would be a great place to look for it to stop. I believe that the major indexes will be topping soon and a larger move south in the major indices is coming. Will gold sell off with the markets? Is gold's descending triangle signaling a sell off in equities? Who knows? I just report what I see.

With gold being one of the most manipulated commodities on the planet and with the markets totally controlled but the central planners, this post may have been a total waste of time. I'll tell you this though, a few short years ago (before total manipulation by the central planners was implemented) if this setup had presented its self, I would have been shorting with both hands if that support cracked.

Just in case - If the dailys move and gold breaks north here, upon the bust of upper blue resistance look for $1800 as a target)