Shutdown in 3...2...1...  I hope they do. I sincerely hope the GOP does not cave to the worse than Bush dictatorial policies of this communist regime. By God, we need to fight them now more than ever and if a shutdown is the result then so be it. This whole mess is a fantastic in your face example of what happens when a bunch of politicians run the show and not representatives. It is also a fantastic example of just how FUBAR things are in DC.

O care is already crushing businesses and employment at a time when they need more help then ever. I get it that people need health care, but I don't get it when you change a system to benefit the few over the many. Kinda like that one asshole that wants the Ten Commandments removed from a courthouse, ain't right. Just like in the days of the pilgrims, it did not work then and it will not work now, everyone has to pull their own load. I'm not saying not to be charitable, I'm not implying that everyone is capable, but the entitlement class is bullshit and they need to be called out. If they need work then quit shipping the friggin jobs overseas!

Here's a suggestion, why not overhaul the healthcare laws and system, lower drug costs, rework the malpractice laws, get the FDA involved with improving the food quality, ..... oops, sorry, all of that IS impossible cause the special interests control congress and their minions. My bad.

Bottom line is this country is going down. We're too far gone for general repairs. We need a total overhaul and its coming like it or not.

Markets are not too happy about this shutdown thingy. I'm not all that worried. Sequester, fiscal cliff, super congress, we've been to the gates of hell before. IMO this is all more grandstanding than anything. The politicians need attention. Like a three year old screaming cause they don't get their way, this is little more.


SPX Daily -Six times this year they have fought thru negative divergence reversal scenarios only to continue to drive price to higher highs. Don't for one second think they can not continue to do it either. This IS a rigged game. 1680 is the 50dma and gap and major diagonal support is at 1666. Those two are my forst targets. If they go I believe 1600 is in the cards and THE top is set. 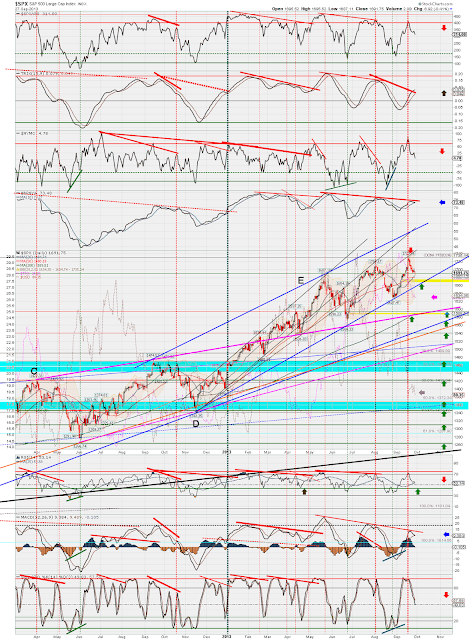 Minis 60m - The HnS breakdown and 1687 support is upon us with the gap down this morning. Minis are at my first 1666 target now. My second target is the MAJOR support red diagonal near 1645. If that goes it should be all over but the crying. 1600 will be the next target after that, and I don't see another 130 point rally in then not matter how rigged the system is. 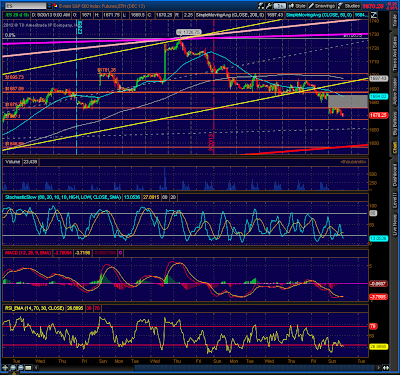