OK, half the equation is in, war is off. Now about that taper ON problem? What's that? Not so fast my friend? War may not be off? A war they must have you say? They must have a war to protect the petro-dollar, cover for the coming financial and economic collapse and infuse the banks and military industrial complex with new riches?

They bungled their first attempt at a false flag and are simply gearing up for another that may involve Israel this time? If we can't start it by God, then someone else will? They forked it up, are pulling back and reorganizing for their next push FORWARD. Now it is just a matter of timing. It is a when not if circumstance.

Personally, I'm starting to think this whole thing was one big show so far. Almost like it was scripted from the start. I'll give one observation that gives it away to me - are our military leaders so stupid to put that many ships in that small of an area at such risk where if a conflict started that whole fleet would be at risk? Makes little sense to me. Looks like maximum drama. And Putin getting to come out on top looking like the superhero? It all reeks of a rigged conflict to me.

Tomorrow is 9/11. That will be a bit obvious for my taste if something were to go down then, but you never know. As sloppy as our planners in the CIA are you can't count this day out as a possible event day. I'm more concerned with the November black out or the FEMA Region 3 October events that have been rumored.

Bottom line is it's all about who or what will buy the UST and keep the ponzi afloat. Who are we going to whore ourselves out to this time (it was China and Japan for a few decades)? Qatar and Saudi Arabia were/are about the only players left in the game here. Military protection and a LNG pipeline thru Syria for them to support the petro-dollare in UST purchases and eventually own what's left of America? Sounds like a bargain!

The rest of the world knows we've put ourselves into a checkmate situation, and the only way out is to break all the rules and blow up the game board. We're screwed. The Fed and administration's BS economic (spend first and ask questions later) policies have completely failed. BSB and his Keynesian printfest has not only been a complete failure but will bring our financial dominance of the globe to an end. War here is a must, so do not listen to all this happy, happy BS about Syria, Putin and all is well now crap. They are just regrouping for a bigger and better move that can not be denied.

As for the markets - someone discusses extreme volatility surrounding this forming top a lot these days. Someone has warned about getting too one sided before the "event". Oh, the top is coming and the capitulation to follow will be of epic proportions, but till that happens you must remember you are dealing with a completely rigged market and a bunch of desperate elitist assholes.

You must remain patient and expect the unexpected (like the possibility of an post LEH 2007 final bull trap that could lead into the Xmas season to save one last retail season). If they don't get their war this year, they will at least try and save the markets till the war does come. I think you have to be very wary every day from now on out and especially the first weeks of October and November.

Minis 4hr - I told you I had little faith in the green resistance diagonal. I still contend the market is without form and in a very precarious position. 1678 resistance here and 1687 just above are the next roadblocks. The 4hr indicators are beginning to get a bit weary, and I pointed out yesterday that all the ST charts have negative divergences and are overthrowing their respective situations. Here we are in the midst of another improbable ramp. 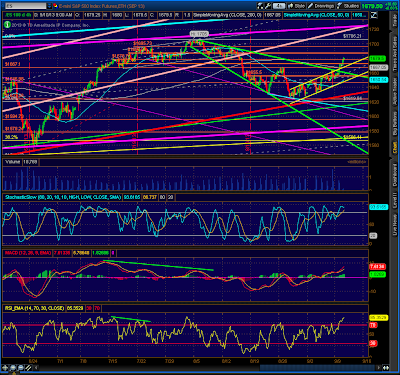 SPX Daily - Going to close the gap? Lots of green up arrows on those indicators. So much for the bear 20/50 dma cross. Blue (like red on the minis) major support held. They took it right to the brink of collapse and turned it like a champ. They built up the bears and kept them in the game and now, possibly, and other short slaughter is on. That is their best tool for lifting the markets now since liquidity is all dried up. This will limit their upside potential. Watch the gap above and then the round level. Resistance should be strong. 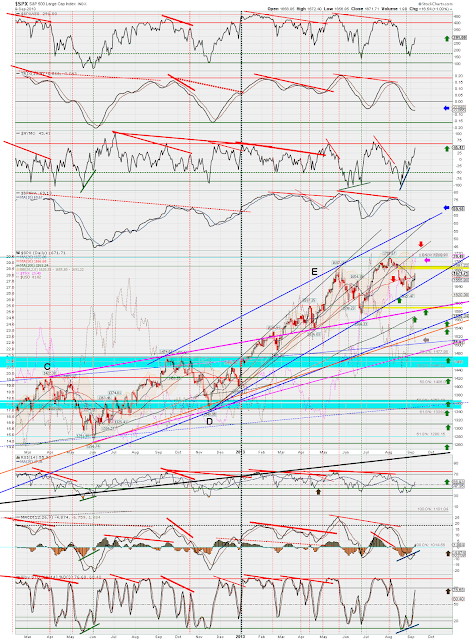 So the bastards have bought a bit more time. It won't be long though. Budget discussions begin this week. They should be interesting. I suggest you read Treasury: Debt Up $0 in August; CBO: But Deficit Was $146B where you will find,

"Total federal receipts were $185 billion during August, according to the CBO, while total federal outlays were $331 billion. Thus, the Treasury was forced to engage in $146 billion in deficit spending.


Despite this deficit spending, the Treasury reported that at the close of every single business day in August, the federal debt subject to a legal limit by Congress remained exactly $16,699,396,000,000."
It is a shell game that is coming to an end very soon. Be ready and remember anything globally that happens is to protect the petro-dollar and to drive external purchases of UST.