"The bottom line is: if firms are unable to borrow cheap to fund the buybacks and dividends that investors have become so enamored with (and conditioned to); a disorderly rotation from rates will in fact have a major negative on equity prices as capital costs surge making shareholder-friendliness uneconomic... considering by far the greatest aspect of EPS beats has been a reduction in the float via buybacks, the fear should be that the much-hoped-for rising rate scenario (lauded by so many as indicative of great things ahead) is in fact nothing but flow-driven and will crush EPS."

I have to agree with most of the above to the extent that easing is not mentioned, but I'm sure it is implied somewhere as that Fed inspired liquidity is the lifeblood of everything. As mentioned, it is almost impossible to succinctly describe any situation these days without involving seemingly hundreds of interrelated items all stemming back to the Fed's intervention and the complete lack of regulation.

With that life giving liquidity injection in danger of being removed, the bond markets are reacting accordingly. They are losing control of the artificially low rates that have been manipulated by the Fed for the past five years (if not moar). Again, knowing all data is complete bullshit (think GDP, housing, employment or anything that comes from the BLS), what are we to believe? Welcome to the Matrix where reality and fantasy can no longer be distinguished.

ZH yesterday posted These False Flags Were Used To Start A War which covers exactly what STB posted last week is a good read and information all around the globe should know. With the G20 winding down and our Nobel Peace Prize winning potus losing his bid to invade Syria without any cause (other than to get a NLG pipelines thru it for Qatar and to completely destabilize MENA for the benefit of the Saudis and the petro-dollar and to cover up 6 years of failed extreme liberal Keynesian economic policy), you should be expecting another false flag incident this month.

How markets are not in complete liquidation mode is beyond comprehension, but then again, what over the past 7 years has made much sense? Impending war, exploding rates, overvalued equity markets, taper ON, employment, debt, O care, what is not failing other than the equity markets? The bottom line is the markets are a farce, an illusion as I have been explaining over the past several years, led to mislead you to believe all is well when it isn't.

With trade dominated by the liquidity injections and HFT algo bots giving the impression there is actual liquidity in the markets by making gazillions of false bids via co-located servers, the markets remain aloft. We're one "event" from the algos turning on their masters and a series (not just one but several) flash crashes away from market instability like never seen before.

This brings us back to the false flag and the impending war. Folks, they WANT TO crash the markets. Their failed policies have led to them no longer being able to support both the markets and TSY/MBS purchases to keep their system alive. One must be sacrificed and that one will be the stock market. So be ready sooner than later as the coming war will be the distraction and alibi they need to cover for the failing equity market.

SPX Daily - They are hanging on by the skin of their teeth. STB started discussing extreme volatility months ago that will be associated with major top formation. STB has also been very cautious of one last great bull trap as seen on 2007 even after the LEH incident. They have to make their move from this level and possibly at this time, cause if that blue support diagonal cracks, I believe the great bull run (greatest bull trap EVER) in the greatest bear market every will finally be over.

Minis 60m - Yellow channel into upper green and nearing 1666 resistance. IMO the markets still lack any sort of form or major distinguishable form that it should be following. I'm not placing much faith in that green resistance right now, but if it should hold, this could be the point of reversal where the markets make a serious move south ending all bull hopes of another move up. The red support diagonal near 1626 in the lower right corner IMO is everything right now. That is the "red line" that can not be crossed. From the top my first target was 1655 and second was the red diagonal. 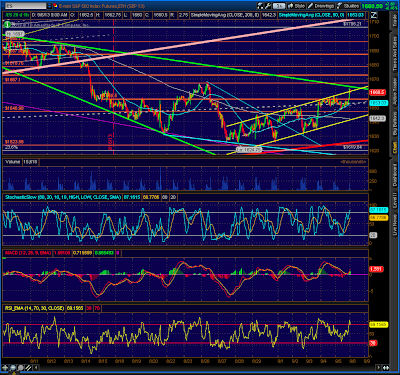 I have not made any sort of calls to the upside other than warning of the market ending desperation bull trap (if that was not the run off the November lows). As mentioned, there is no real form to this move off the top which keeps me leaning to the bearish side of things. If they can manage to take out the green resistance and 1666 next week may be a good one for bully, but with congress coming back in session, 9/11 and the budget debacle I would not be counting on anything to great. A taper OFF discussion is about the only thing that will lead this market higher at this point.

More to come below. Thanks for another great week on the blog.