All from Zero Hedge this morning which is reading a bit more like an obituary today. I thought they linked together nicely into a single post.

"In a sense the markets are experiencing a "Vietnam Moment" where we all believed what we were told and we all accepted the official headlines until the day came when we found out we had been flimflammed and you know the results of that fiasco. I believe that the markets are quite close to a shift in psychology where people and institutions alike no longer blindly accept the stories as told. "

"as BofAML notes, there is plenty of resistance to limit upside. With 1658 as critical resistance (S&P 500 cash traded 1651 this morning), the following charts show the weight of evidence suggests deeper downside risk to the June lows around 1560."

"Duvvuri Subbarao, the outgoing head of the central bank conceded that policymakers rarely learn from their mistakes: "...in matters of economics and finance, history repeats itself, not because it is an inherent trait of history, but because we don’t learn from history and let the repeat occur."


"There will be fighting and sharp words along the way. Members will be coy and make impassioned speeches. It is all for show. It is important to make this clear to readers: The fight is not between whether the House and Senate will pass or reject the president's request for authorization to attack, but rather what kind of force authorization will ultimately be brought to the Floor for passage... "

" "Our prediction: the next ship to be dispatched in direction Syria will be the missile cruiser Moskva, the "flag ship of the Black Sea fleet" and more of its affiliated warships.. "

""interest rates are no longer a tail-wind, earnings growth is not there, and emerging economies are collapsing (so no global growth)." However, with asset allocators "swimming in the pool of liquidity" it is hard to say 'when' it will occur especially as money floods out of EM markets. Critically though, it is Syria (and the spillover) that has Faber most concerned; as he concludes that Western governments "meddling" is "going to be a disaster.""

"Reuters reports, citing the Nuclear Regulation Authority, that readings just above the ground near a set of tanks at the Fukushima Daiichi plant showed the radiation had risen as high as 2,200 millisieverts (mSv). Both levels would be enough to kill an unprotected person within hours."


As for the markets this morning -


SPX Daily - Critical diagonal support is the big story here. The blue diagonal off the November lows is it. If this cracks then all the diagonals you see below are all critical starting with the pink one near 1588. This would be the backtest of the upper market resistance of the final rising wedge marking the top of the bull in a bear market move. I don't think this diagonal will provide much support. It is the next blue diagonal and the lower pink one that you need to be concerned about, but we'll get to those when necessary. 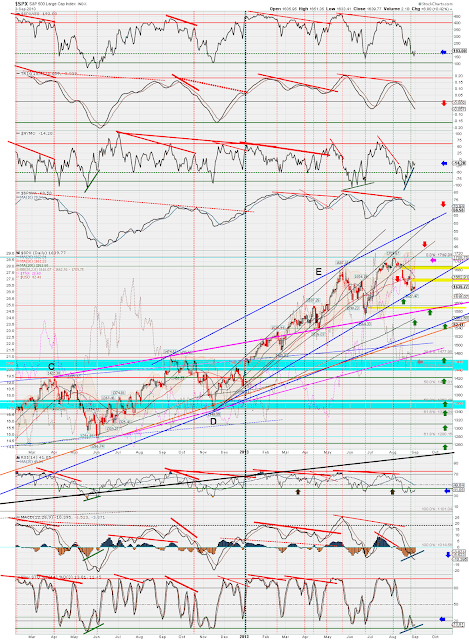 SPX Daily - As for the BofAML targets above, I've been showing these green target boxes for some time. They are common or multiple fib alignments. When they work with important support points you get a powerful target area. More on this as needed as well in the future.

I'm more concerned about the beginning of October than September as for war probabilities. Either work and the new moons at the beginning of both months should be a time of concern. How this relates to the markets is anyone's guess. They want destabilization, higher oil and to protect the petro-dollar at all cost now. They are trying to get you to think gold is worthless and irrelevant when the truth is quite the opposite.

We're at a very dangerous point in time. Our government is out of control and is about to enter a war that 91% of Americans don't want or agree with. You need to have  your head up here and be watching carefully. The big grab is coming. Just like the markets have been an illusion or distraction to the failed economic policies of the Fed and this administration, this war is the next and even larger distraction. What's coming next is the serious theft and final move for the government's total takeover of the nation.

Minis 60m - Still wandering formlessly which is bearish to me. The markets are confused. They are not basing or forming anything. The are lost right now. They are broken with no leadership. 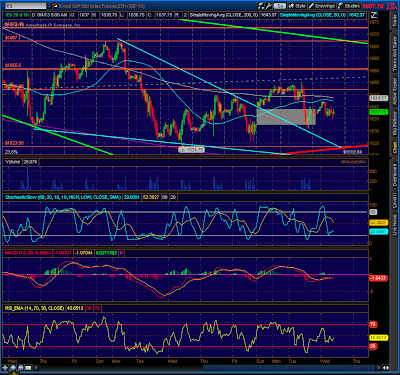 As for the markets movement, watch that blue diagonal on cash and the red on the minis. If these crack, much worse is to come, but till then volatility will reign. Bull and bear traps will come and go as this top sets. I've been speaking about volatility marking this top for months now. Remember AFTER then LEH incident in 2007 the markets rallied to new highs and that same sort of move is possible here.