Well this post from CNBS was quite the surprise - Stocks are about to plunge, Wells Fargo strategist warns.I wonder who's gonna get canned at CNBS for allowing that to be released to the sheeple? Very surprising for a government agency, you know what I mean, to be dissing the powers that be.

And then you get this - Futures weaken after Bullard's comments on taper
I guess the propaganda and spin will not stop till the music is actually over. Getting any one of these freaks to tell the truth is impossible. "St. Louis Fed President James Bullard said the central bank could taper its $85-billion-a-month bond-buying program during its October meeting." BofA has now released a December taper ON target. Really?

They are already going back to taper ON talk? Come on man! I guess they got to keep the hope alive that the recovery is ON and that we're headed in the right direction. Never mind that the Fed just basically admitted they can not taper EVER and that every policy they've installed over the past 6 years has been a complete bust.

I'm gonna take the weekend to mull over a top call. I'm more than ever ready to pull the trigger and hope that my patience does not bite me this time. I don't want to make the call on a Friday if I were to call one.

The Chicago shooting added to the DC shooting should warp the gun grabbers into overdrive. If you have not read about the DC SWAT team stand down orders, you should. One would think that the CIA would have these false flag events down to a science by now, but they appear to still be bungling them and running the operations with all the skill of a 5 year old.

Daily SPX - As discussed yesterday, she's ready, just gonna need a little nudge and down she should go. 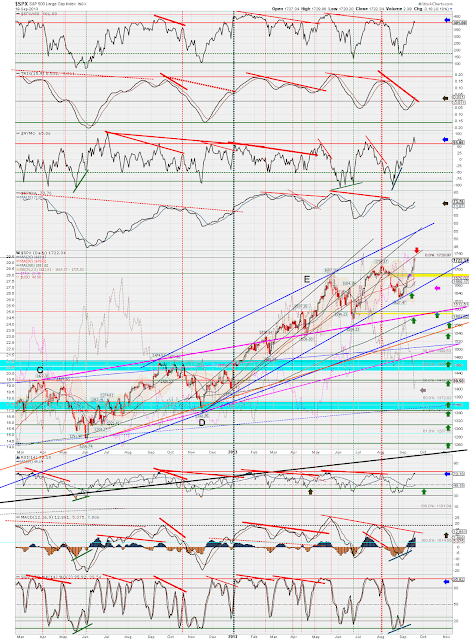 Minis daily - Top of the pink channel hitting the STB point mentioned a few weeks back, I'm now a bit leery of the next and last possible STB point where beige meets blue and yellow near 1762 near October 15h. This one has me a bit perplexed. 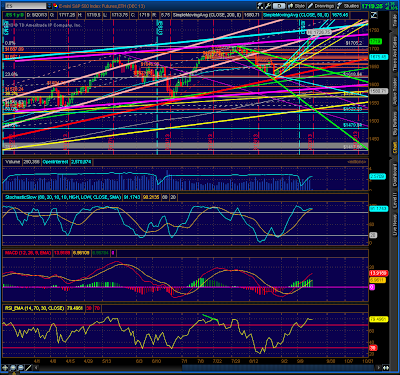 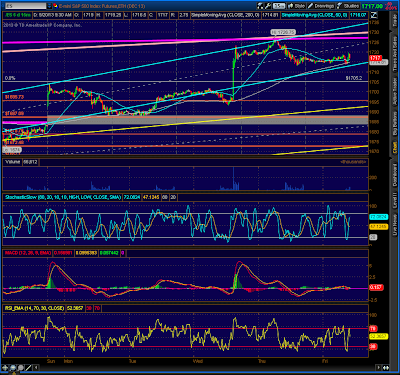