A must read instant classic (for the truthers that honestly get it and for those stuck with their heads in the sand that need to be bitch slapped back into reality - which is impossible of course) - Laurence Kotlikoff: "The US Fiscal Gap Is $200 Trillion... Our Country Is broke" One of my favorite one liners that's full of dry humor -

"Using economically meaningless fiscal indicators to guide fiscal policy is like driving in NY with a map of LA. If you aren’t careful, you’ll drive into the East River."

In the meantime markets keep breaking. Rogue (Goldman) Algo Exposes Cracks In The Options Market and Vicious Gold Slamdown Breaks Gold Market For 20 Seconds this morning are just two of many recent very public instances where the markets are starting to show how unreliable they are becoming. One must ask, is this the place you really want all of your life savings? No other option you say? I say physical gold is real and will be king sooner than later.

Again, I'll simply be on countdown watch this morning waiting for my "event" or for something to break. They remain in complete control for now, so bulltards need not fret yet. We're thru 9/11 now, and it's time to get budget talks rolling. One thing is for sure, this will be a non event just as the fiscal ceiling was. The spineless bastards in DC will simply raise the debt ceiling and promise to cut $2 trillion in spending over the next millennium. Problem solved! FORWARD!

Syria remains the big deal. They have to have a war and not just a small one. Keep an eye on that. Soon enough the Russians and the CIA will have equipped both sides well enough that Assad will not have anyone left to rule over. Simple solution, just let them wipe each other out and the problem is solved. Well, not really, but that appears to be the path we're headed down.


SPX Daily - They closed the 85 gap yesterday. War off (for now) and possibly taper off could become a real issue for the bears that came oh so close to getting their Christmas wishes early. They set 'em up like a bowling pin and now the short covering scramble is driving things higher, improbably, yet again. Who cares about the bond markets and rates? What do they matter? As discussed, once over a 61% retracement, this market has demonstrated very high odds of reaching higher highs. It will probably remain unstoppable till it breaks or something breaks it, which we're beginning to see signs of as shown above. 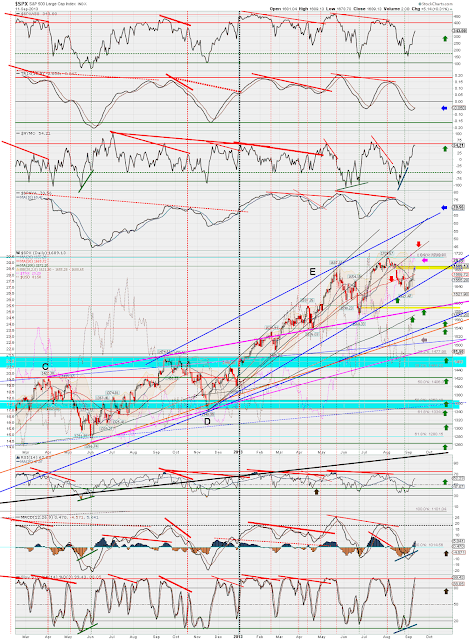 Minis 4hr - Just above is the cross of the pink and beige diagonals on the 16th. This is a possible STB point. I don't like it but it is there. Still formless and wandering, price is lost IMO. This move looks very similar to the Taper OFF rally in June. Once this 87 level is cleared there should be little to stop it other than the round level before the top. 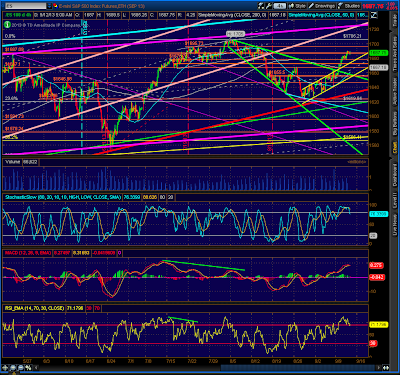 Now, all that said, we're getting ready to get into a very newsy situation surrounding the budget. This could throw even more volatility into the machine so be ready for some wild action.