I'm positive the Nairobi mall massacre will have Feinstein and Obummer calling for global gun control ASAP. With three of the gunmen supposedly Americans, they will not be able to take any chances you know. I'm positive there will not be any connection between the CIA and the guns that were used in the event. Holder will confirm all of that.

Add to that Usagi, which will have the rest of the government agencies scrambling for more domestic controls as if such an event were to happen here they would need to be prepared for anything up to and including marshal law. They better hustle getting that facial recognition system into place.

The news gets better for the Fed as Merkel will remain in control of Germany. I'm not so sure that's good for the Germans or the other comrades in the EU. At least the elite will be able to move along unimpeded with their monetization schemes and market controls here and in the EU. Other than not being able to get a lift from Hong Kong this morning, things should be rather normal ahead of the debt ceiling and various other votes before congress.

Bottom line, despite the rumors to the contrary, taper is still OFF till at least October. I don't like to quote or bring up Faber much, but this time he's dancing along the lines of some of my fringe thoughts where QE could actually be increased. In this interview, I think he gets many things right - Marc Faber: "Fed's Neo-Keynesian Clowns... Are Holding The World Hostage" and you should listen to it.

The Fed is screwed, and I can see a scenario where we get taper lip service while at the same time QE is increased. Look, either they are ready for the end of everything as we know it. They are ready for the big exit, or they are gonna party till they can't party anymore. We've been discussing stealth QE and off the books spending for some time here. Something is supporting more than both sides of the ledger (bonds and stocks) still.

I'm still on a top hunt. I'm also on an STB "event" hunt. We had what may have been another domestic false flag in DC last week, and I expect more and larger to come. Nothing like having the SWAT team stand down when it shows up before it was supposed to. Maybe they need our guns first (not gonna happen). They sure are acting as they have plenty of time before the walls come crumbling down (when they don't).

Daily SPX - She's ready, but is this it? 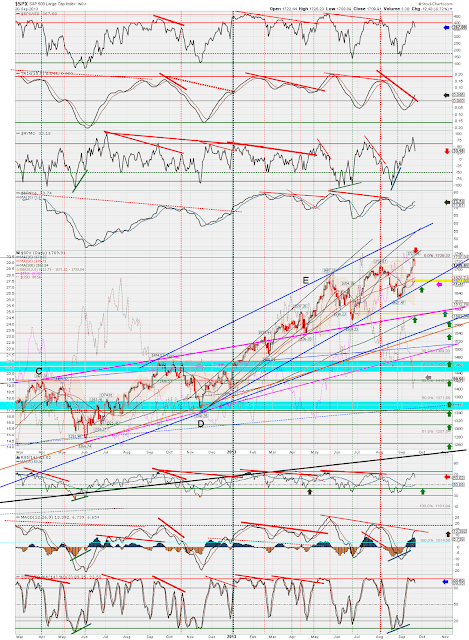 Minis 4hr - I went to the travel computer for this minis chart. You can clearly see the green channel that has this top corralled. You can see the beige backtest. and the STB point I had been warning about at the intersection (those things are amazing). That pink support close to 1666 is IT. There is one last potential STB point out to the right near 1762 in mid October. Not sure if I am going to hold out for that one. I still have Xmas rally worries along with the potential QE increase nightmares I have all the time. 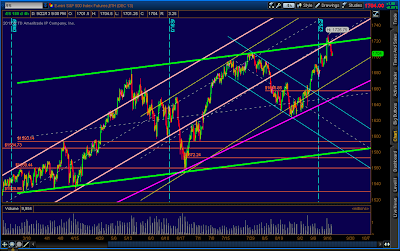 More to come below. I'm tempted and on the hunt. We came really close when Syria was hot and heavy. They need a massive distraction. It will happen when they are ready. Question is when will that be. they can't keep this up. They can't continue to support both sides or really either at this pace with the economy eroding out from under them. Be ready. It's going to happen soon I believe.

Have a good week,.