Once again, STB is not feeling very Christmasy this morning. Just can't get there this year. Have you noticed how few people are wishing you a Merry Christmas or Happy Holidays on the street compare to the past? I have. Times are a changin and the social mood is not positive at all. We're bleeding out right now as a society. We're divided and siding up with our teams. This is all by plan I hope you realize and the government has us right where they want us.

OK we're thru FOMC and now this fiscal cliff thingy is hanging over our heads. Separating reality from fiction is the hard part here. What are they telling you the truth about and what is a lie? The readers here know not to listen to a word said by the talking heads or the politicians.

We all know that the math does not lie and no matter what they do to fix the multitude of problems, no real solutions are possible. We're simply too deep in debt and the entitlement state is out of control. You've heard it before - on $2t in income you can't afford a $3t spending habit, a soon to be $18t deficit and $122t in unfunded liabilities. Well, we can, but eliminating half the military budget, cutting government spending by half and appropriately taxing the corporations would decimate society as we know it.

So the preferred route is to continue the current path towards destruction. Just keep the illusion alive as long as possible. Keep the sheeple in the dark and social unrest at a minimum till the system finally breaks. Why choose to be responsible and cut now, when the ultimate end has been chosen no matter which route we choose? And the new Fed board of governors? It will be the most doveish in history. Because of the Fed, the Rothschilds, Rockefellers,  the BIS and hundreds of corrupt politicians along the way we are where we are.

How far have we digressed? Look no further than the presidency and his actions. Mandate? The dude is delusional. The welfare state is about to take total control. It will not be long now till everyone works for the state. Wealth redistribution is coming and they have the perfect man in place for the job.

Back to the cliff, it may or may not be avoided, but the Fed has made it clear that they will QEternity and continue to manipulate rates. The government will have a full checkbook no matter the debt ceiling. Higher taxes are coming on the sheeple (not the corporations). You will realize that you are no longer a free person, but a indentured debt serf to the state.

Yesterday Zero hedge posted Does The Fed Think The S&P 500 Will Be At 750 In Jan 2015 and I promptly tweeted a reply with this chart I have been sporting for years now. So, the cycle chart below works out pretty well with what the ZH post is thinking.

SPX Weekly Target Chart - Over the years I have had to adjust each downward projection with the advent of every new QE. When we were looking at the worst last summer I gave several scenarios. Fortunately I gave one that took us to this top and what I have long been prognosticating as the end time. STB has been on Q1 of 2013 as the farthest they could continue the charade for well over a year now, and I like my odds of that being correct. See that black box? My only fear is that I miss it because it is too far out in time. When we capitulate this time it won't take years but months to get to the bottom. 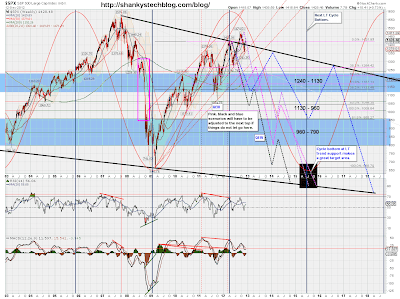 Minis 4hr - Well, STB has been on 1432 as the max for this move pretty much since the reversal and the beginning of the green retracement wedge. Other than a bit of a spike to 38, 1432 is holding at the triple resistance point. I don;t think much is going to happen the rest of the year. I would be surprised to see us leave the 00 to 40 range. Might be time to settle in for a long winter's nap. 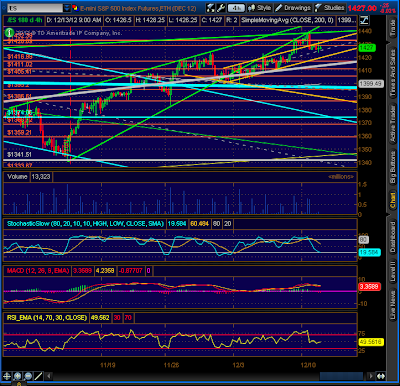