Ya ever been in a holding pattern waiting to land at JFK, LAX or ATL? Sucks right? Well that is where the markets are right now waiting to land after the fiscal cliff storm has cleared. It is impossible to see the runway right now and if the pilot knew what was happening in the control tower he'd just fly on by and go the the next country.

If the plane does not have enough fuel to make it to the 11th hour it better just move on to the next airport, cause this runway will not be clear till then. Just like the last three or four instances where the government tried to pull off a bi-partisan effort to actually come up with a budget where it failed miserably, they will fail again.

Actually I like the odds of a compete failure this time and the cliff being crossed. Lord knows a complete bust is about the only thing that will save this nation now from the robber barons. If we only had sense enough to let this thing go in '08 we'd truly be in a full blown recovery right now and not this POS lie fest they call a recovery.

The government's only game is and will remain to stall and let the market be fueled by the rumorfest that happens daily. Lies are Talk is cheap and the markets love talk. The markets feed on the prognostication of solutions to economic problems. They love to drag things out knowing the drama and build up to the resolution is a wonderful market motivating event. News and hype, all will always be well, the government is your wing man, we'll never crash and burn, put your money to work now or you will miss out on all the riches is all there is fundamentally to the markets and economy now.

Shall we take Greece as an example from the EU? Care to tell me how many times they have been to death's door and each time they near it the bailout rumors do what no matter how dire the underlying financial reality is? Shall we discuss QE4? They sure are, and how timely with the FC hanging over the nations head. It is almost like (not almost, is like) the more trouble the better. The worse the news is the more they can hype bailouts and economic lifting stimulus.

So there you have it, as I have preached all year, Follow the Fed, check your brain at the door each morning, cause nothing else matters. They pomp and pump and the worse the news the more guaranteed a reaction from the government will be. Let's not even discuss the government actually solving a problem, that would be a waste of my time and yours. Everyone and their uncle knows the only answer is to print and every time they print the markets only do one thing.

Minis 30m - Rough, but it can be called a channel (yellow) as price tries to break down from the Green rising wedge. The main playa here is that white rising diagonal which is market support off the October '11 lows. Note the massive hole between that and big blue below. There is zero structure to this rise off the 1397 low. 21 point of this move up from 97 to 22 came in two half hour periods. That can leave just as fast. 16, 11 and 05 are the main s/r points as they have been for some time now. The possibility of a double top at the 22 level exists, but the charts are not quite ready. 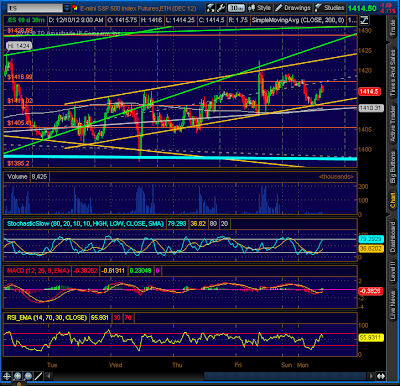 SPX Daily - Still backtesting the busted blue rising wedge support at the 1422 resistance area. I'm watching the SPXA50. If they can push that (above 50dma) to 400 and the NYMO can form a divergence I'll start barking about a turn. Market price is not healthy here, just know that. 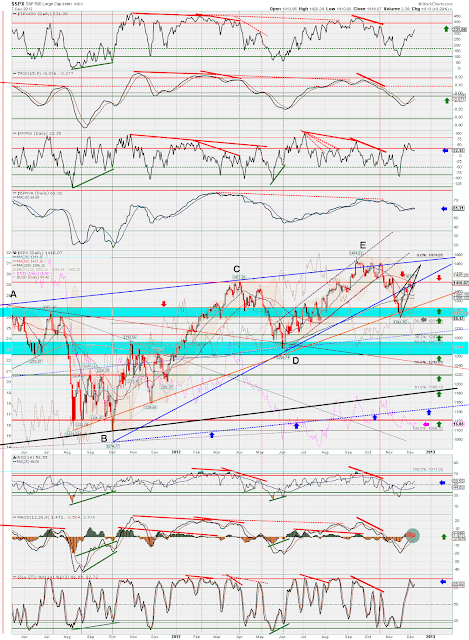 I think we continue to consolidate and maintain 1432 max upside at this time.

I ran out of time this morning, but expect some Christmas cheer to come to the blog sooner than later. Time is short and we still have every reason to celebrate no matter how dire the situation.