It is default, there is no other way of putting it and Greece is finally there. We've been discussing the coming of this for years here at STB. If it took Greece this long to get to default, then how much longer will it take the global financial system to get there as predicted here at STB over three years ago. Do the math folks. It won't be long.

What happens surrounding the default is key. I suspect the "selective" part of this will damage the consumer side and barely scratch the TBTFs around the globe. What happens in the CDS markets is most important, but it appears those have been sterilized. Funny the lack of concern. I guess it does not really matter when something based in fiat loses its value, it had no value to begin with. Either way the central cog for money distribution (think laundering and mafia) in the EU will keep the power on another day.

As for yesterday's bizzarro market action, what can you say other than the markets are totally busted and manipulated. Maybe you should read Stop-Hunting Algotron In Charge As Equities End Small Green if you need a bit more explanation. AAPL and the Q's take it on the chin but the DOW and SPX come out unharmed? Really? Are you kidding me? One word, rigged, end of discussion.

Daily Index Comparison - The DOW and the SPX are getting MAJOR intervention support over the past month. Painfully obvious. 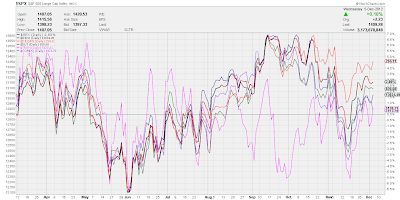 Daily SPX - I think we're getting ready for a drop to the 1170 to 1200 level. Based on the way I see the setup in the indicators this run looks weak and never had the full support of a proper turn off the lows. I think the bottom is about to fall out. It may take a few weeks, but I think it is coming. If this happens, it will be run for the hills time and the farce will have finally ended. It is time to prepare to duck and cover me thinks.

The 50DMA, 1422 s/r and the backtest of the massive busted blue wedge support have price here. IF they can crack this to the upside would be a miracle and the set up point is textbook for a major continuation of the fall. This could literally be the second best exit point you could get for decades. Now, team manipulation is in total control and (using yesterday as an example) they can literally pull anything off they want to, so don't go sell the farm quite yet. You do need to have your bug out bags packed and ready to go though. 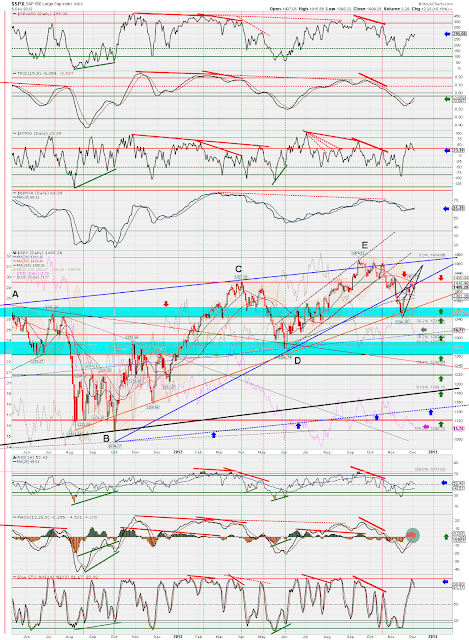 Minis 4hr - the bears need to pull it back thru Big Blue. I will be watching for a backtest of busted blue channel resistance. The usual suspects lie below (74 and 41). The way the Fed has manipulated price has left massive holes in support, so when this thing does fall with the proper momo, the landing areas will be few and far between.

Rising green wedge taking out upper blue channel resistance all the while backtesting big blue (old upper market resistance off the '07 top) and more importantly backtesting white busted support (off the October '11 lows). This is a major friggin intersection in the highway of the markets life. The bulls Fed has managed to breach this improbable point and price remains above 1374 (the level where oxygen runs out). I don't think they can hold price up here much longer. 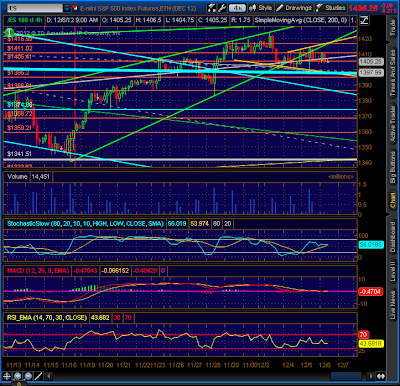