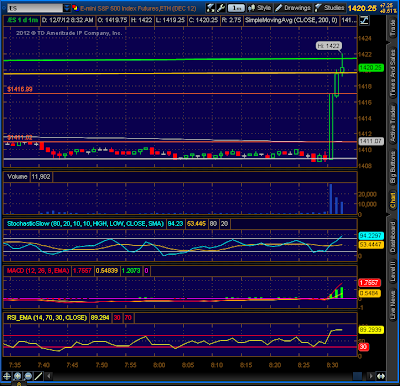 Price has been bouncing around Big Blue (upper market resistance diag off the '07 top) and white support diag off the October '11 lows for about two weeks now after channeling down (blue) off the top into this multiple support area near the round number 1400. The rising green wedge is a textbook retracement move (in any "normal" market. Support for this wedge broke earlier this week after it completed proper formation. 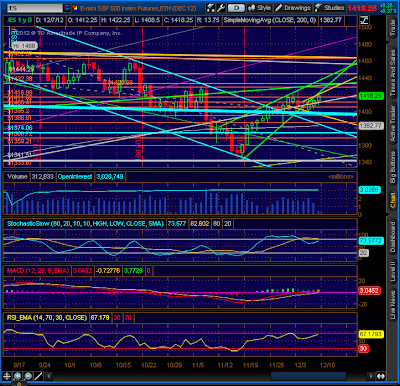 And the pop this morning achieved what price wise (not like it matters economically or in reality that is if you don't believe a 7.7% unemployment rate which is total horse shit)? A near perfect backtest of the busted wedge support. It set a nice (but small) double top on the minis daily marking divergences in RSI, S Sto and the MACD histogram. These are tiny, but they are there. The divergence on the 60m chart goes back to 11/19. The 30m divergences go back to 11/29 and are in a blow off top now. 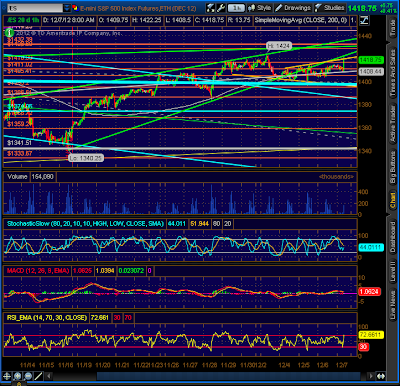 So, technically this move could have disaster written all over it. A lie like this to move the markets while the FC debates are(n't) happening is all it is. How this works with the FOMC meeting coming up later this month is another question. Not sure how "improving" economic lies data furthers the course for perpetual QE. Bottom line is everything is out of control. It is all one big lie and it will resoundingly bite them in the ass sooner than later.

I think we're on the verge of a major collapse. I think they all know it. Remember they are desperate and like a lioness cornered with her cubs they will fight to the death to protect their assets. Sadly death will be the end result for all. I am still willing to give then the 1432 area but no higher at this time. I'd really like to see a reversal off the move this morning. I have discussed how I think the move off the 41 lows was not all that and a bag of chips as far as set up goes.

Bottom line is it is all a lie. Nothing is real. You can not believe anything you hear or see, and to trade properly you almost have to go against every principle you have learned thru the years. What you really need to be doing is working on an exit plan to get your assets out of the banks and brokerages and out of the dollar and into hard assets, cause this game is gonna end and when it does nothing will be left. total carnage, nuclear devastation, however you want to envision it, if you are still in the game you will be wiped out (and this is what they want).

Next week I plan on trying to bring the Christmas spirit back to STB. Come hell or high water, no matter what these fuckers throw at us, Christmas will come to STB. The day after the election I wrote about God being removed from the equation, and  He has been. We need to put Him back into the picture and not just in it, but at the top.

""And there were in the same country shepherds abiding in the field, keeping watch over their flock by night. And lo, the angel of the Lord came upon them, and the glory of the Lord shone round about them: and they were sore afraid. And the angel said unto them, 'Fear not: for behold, I bring unto you good tidings of great joy, which shall be to all people. For unto you is born this day in the City of David a Savior, which is Christ the Lord. And this shall be a sign unto you; Ye shall find the babe wrapped in swaddling clothes, lying in a manger.' And suddenly there was with the angel a multitude of the heavenly host, praising God, and saying, 'Glory to God in the highest, and on earth peace, good will toward men.'" "

That's what Christmas is all about, Charlie Brown. It is not about weapons, wars, entitlements, free phones, socialism, police states, drones, it means just a bit more.


Have a good weekend.