It feels like a Friday for some reason. Maybe I just know that everyday is gonna be a wait and see event till the FC issue is put to bed. It is pretty clear to me that Congress will not solve anything and O will decree a final result via his powers. Well, that's what I am thinking at least. The markets are holding up in a manner where they know for now that the FC will be averted or if not it is immune to any economic pitfalls that may be a result of an FC failure.

That made no sense did it? How can the markets be immune to an FC failure leading to furthering the economic malaise? Cause the markets are RIGGED! Not till the catalyst that leads to my "event" that causes the Fed to lose control will this shitbin they call a market finally fail. And fail it will one day.

Elections here, austerity there, bailouts galore, fiat printing saving everything, they have only one strategy and that is to spend their way out of this mess. Apparently debt is no concern to the idiots running the asylum. IMO you need to understand that unless some new technology comes along that will drive employment and consumption we're dead in the water.

The problems with new technologies are that they are efficient, usually not labor intensive to produce and usually create efficiencies lowering labor usage as a result of their existence. Like I have said over the years, not until the minimum wage is lowered to a point we can put people back to work and be competitive again manufacturing will this financial crisis end.

The global ponzi is dead. Our duty in the global ponzi as the great consumer is dead.  We must go backwards now and become competitive globally. Without jobs we can't move forward. We can't have jobs though cause this would be unfair to China and India and the like.

So there is our catch 22, China and the like were buying treasuries supporting our welfare state so we could buy all its lead laden trinkets made by slave labor. Now the Fed is having to soak up 90% of new issuance and China is a net seller of treasuries, but we still can't work cause it would be unfair to the rest of the world. We're not only supporting the welfare state here, but we've actually created an entitled planet that relies on our addiction to debt and shopping to support everything.

So the rest of the world bled us of our jobs, gave us money to buy their shit and now have stopped giving us money. The circle is broken and we're F'ing stupid enough to print, print, print to keep the cycle going after we've been left high and dry. Now we can't afford to make anything cause our labor cost is so out of balance with the rest of the globe. So, in the end we must lower our standards to get back in line with the rest of the world, and thus I say not till minimum wage is lowered will we ever be able to compete and put people back to work.

How much pain will that cause? How freaked out will the entitled state be? Shuh, its gonna be nasty when austerity hits the USSA.

Daily SPX - When the turn back in November happened other than oversold conditions the only real (IMO) signal was a change in the MACD histogram. Here we are again with the Hist having its first lower/higher candle. The other indicators appear to be pausing as well. The 50 dma and 1422 resistance in conjunction with a backtest of the busted blue wedge support are hindering price's advance here. The near term wedge is ending at the 61% retracement of the fall from the 1474 top. That is a lot of headwinds. Throw in some FC uncertainty combined with not so favorable economic data and projections and add the EU and MENA and the mix is not all that favorable. One thing I like to watch here is the SPXA50. I would like to see that hit the 400 level again, but that is not necessary. 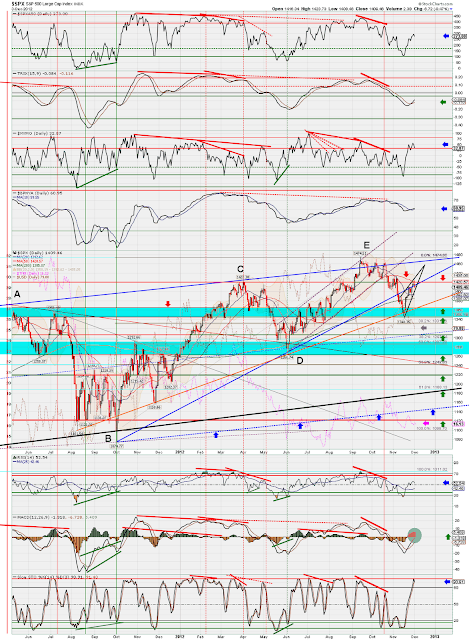 Minis 60m - I covered the reversal point yesterday morning, now we hit first support. White diag of the October '11 lows is in play here with near term green support and just above big blue. Kind of a minis STB point right here at this intersection. They either stick save it here or things get worse again. I still hold 1432 as all I want to give to the upside. I am still bearish. I am still cautions to a move in either direction and contend this is a dangerous place to be playing one side or the other. The green NT wedge has completed and should breakdown here, but they could push it up one last time. Just be careful. 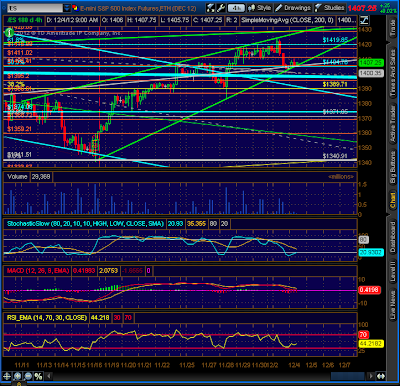