SPX Today - She's Goin Down And You Will Like It! (Plus Dollar, Oil, Vix and Shanghai)

OK, so we made it thru a false pop today because the rumors of a second stimulus were going around (now if someone would explain to me A) why that is a good idea and B) how is it possible - anyway you now know what to look out for in the future when that talk starts going around - IMO it is realistic but unrealistic if you know what I mean).

Note - The width of the BB's on the daily chart are extremely tight indicating something is about to bust. Up or down? That is what I am trying to decipher.

Bear case - Bottom line is the weekly and daily indicators are headed south and the 60m (see chart below) is topping out and possibly rolling over. That puts all three in line for a powerful move if it happens.

Bull case - 1) the 60m turn signals are not confirmed yet 2) the action of the RSI on the daily chart (holding 50 and headed up), the MACD hist on the daily is stopping its fall, the S Sto on the daily appears to be losing some momo.

I'm hoping the rollover of the 60m and having the opex trade out of the way will make room for more downside action. I want 945 so bad I can taste it. I have two channels drawn on the chart (red and Blue). All lines are copies of the other. They both would make for nice targets. The tight ass BB's on the daily indicate something is about to bust a move big time, so be careful if you are short or long. When it runs, you'll know what team to be on.

My other thoughts - on the VIX - Well, I'm not going to call it totally irrelevant, but it may have lost some of it's luster IMO. I honestly think it will put in the dead cat bounce and possibly go for the backtest of the falling wedge. This will occur on the last hurah as the market climbs to 1050 after this correction. If the $SSEC Shanghai index is any indication, it has led the SPX and with this most recent fall after peaking, maybe, just maybe, the trend holds. As for the dollar and oil - who the heck knows. They are both so manipulated. I'm guessing the bottom is in for the dollar and a top is in on oil, but those are only guesses. 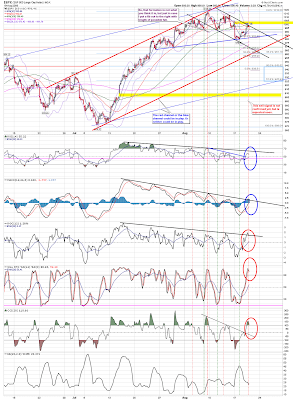