Lets Look At A Few Charts

Take a look at the three charts and draw your own conclusions. Some road signs are there and some are confusing because of the manipulation.

The first chart is the monthly I showed you last week.

So what does all of this say? Well, not much because there are conflicting signals. the chart has a ton of similarities to the end of 2003 when the last bottom happened. On the other hand you can cherry pick some similarities to the last top in 2007. Given the overbought scenarios in the WEEKLY and DAILY indicators, a turn should be happening sooner than later. I am still going with my prediction we top in October after a good move south soon.

For those that say this last bottom did this and this other bottom did that need to realize history is a good guideline, but this time is different. This is a true financial crisis like nothing we have ever experienced nor will we again in our lifetimes. We once had a savings rate of -1%. We were the world's consumer. Our consumer is dead and there is no one that can step up to take our place. There is nothing that I can see that will readily put 10% of our country back to work and more factors that will continue putting people out of work. The debt can not be supported and the failure of treasury sales is your first clue that this is ending. The HFT, accounting fraudulent, government sponsored rally we are experiencing is pure bullshit. 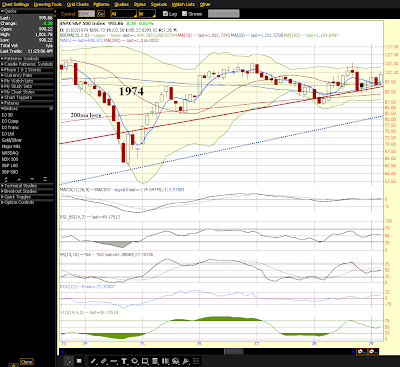 The following is a chart from 1928 thru 1944. The last great depression. If we don't go crashing to new lows, I expect something like this to play out with what I would call an L shaped recovery over an extended period of time as everything resets and we work off the excesses in the system. In this chart you can also see the channels I have for the LT trends. The market is currently near the 50% line of this channel (thus plenty of room to fall with the 75% line near 450 and the lower line near 300). 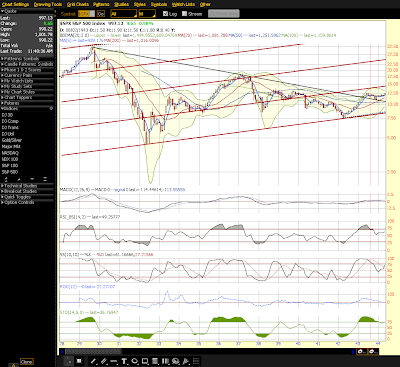