OOOOH She's Getting Toppy (Or Is She?) And Some News

First to the news. It never ceases to amaze me the crap that we are fed daily thru the media moguls. I guess they think they know what "sells" best, so why report the important shit that may make a difference in your life? Glad I am not stamped out of the standard sheeple form. That would suck, but then again, I would not know it.

USA today reports that more demand will be front loaded to make the back end worse. No not really. In Appliances get their own recycled clunkers programs we learn that "But old energy-hogging refrigerators and freezers qualify for recycling and cash from more than 60 utilities across the nation. And the federal government is making money available to states so consumers could get rebates of $50 to $200 for new, more energy-efficient appliances later this year in a so-called "cash for appliances" program.".

The article also covers the success of the CARS program, but what does the major rag leave out? Let Denninger at The Market Ticker fill in the blanks. In Government (And Car Dealers) Hose You Again, Karl gives you the low down on the truth behind the curtain. "So you get nailed at least once and possibly twice. Specifically, you pay sales tax on the full vehicle price (effectively paying sales tax on the $4,500!) and what's worse those states that tax income (that would be most of them!) might wind up counting this as income for state income tax purposes too, effectively taxing you twice."

While we're bangin on bullshit media reports, how could we leave CNBS out of the equation? That would not be fair and equal treatment since they are the crown jewel of crap. TD at Zero Hedge pulls this gem in 16 Year Low In Housing Inventory On Record 1,939,197 Foreclosures. The title kind of says it all. Maybe the market is now seeing thru their shit as the muted response to their reports are now becoming more common.

If you have not seen it on ZH or many other sites, the article of the day comes from Chris Martenson, The Shell Game - How the Federal Reserve is Monetizing Debt. This was written for his subscribers back in early august and just released. Must read central if you want to understand how they are financing (term used loosely) our recovery. "The Federal Reserve is monetizing US Treasury debt and is doing so openly, both through its $300 billion commitment to buy Treasuries and by engaging in a sleight of hand maneuver that would make a street hustler from Brooklyn blush. This report will wade through some technical details in order to illuminate a complicated issue, but you should take the time to learn about this because it is essential to understanding what the future may hold." If you want to understand most likely the greatest threat to our country's future (IMO) read it. I liken it to the Rolling Stone GS article by Talibi.

As for the market, I am now doing a morning post, so check in the am if you want to know what I am thinking about the day ahead. So far so good on the call. 1 for 1 baby! Maybe I should quit now? (see below). Right now some are calling the top as being in and others say we are getting close. I am skeptical that the top is in, but would not be surprised if it is. I think we need a major down day to mark the moment. I am of the opinion that they will not let it go just yet. They may need one more month to get the quarterly statements right. I'm sticking with my 1050 to 1121 top in October (12th to be exact).

The indicators are severely overbought. I do not like what the dailys are doing right now as they are sitting in a precarious spot looking to go wither way. The 60m indicators have proven not to be reliable as can be seen during this last run up when they fell the whole time and had zero effect on the market. The weeklys are topping. Volume is dead of course. The VIX might flat line down here with the economy.

Tomorrow has jobs and GDP. I am not sure how they will massage the numbers yet. I added a second third to my SDS position today with some caution and a tight stop at the close(first entry at 1006 SPX). Dangerous before the numbers, but willing to take the risk with the small play and the possibility that any pop will be short lived. The market has been ignoring some of the "good" news here and feels toppy. We'll see. 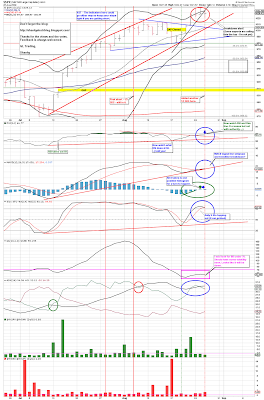