I had more fun watching this than doing anything this week. From the ZH post Matt Taibbi On The CNBC "Presstitutes" the sheer ignorance, idiocy, arrogance and raw pupetness of the CNBS crew truly come to life for all to see. I honestly believe my overall IQ has increased cause I stopped watching CNBS close to three years ago. Cold turkey turned it off and you should as well.

"In this episode, he discusses with Matt Taibbi the recent appearance of Salon’s Alex Pareene on CNBC in which Maria Bartiromo unabashedly presstitutes herself out for Jaime Dimon and JP Morgan in an utterly embarrassing manner." This is funny as hell is what it is. It's so good I can't even lampoon any of it. Legal problems aside, it's all good. Welcome to the new normal.

And some wonder why close to two years ago I just threw my hands up in the air, apologized to all my readers, and said there is nothing left to do but follow the Fed. Some wonder why I can remain so calm and have not called a top since the end of QE2 in 2011. The markets are one big unregulated rigged POS totally controlled by the central banks and Wall St. It is an unregulated wild west that is doomed for implosion, but till that point you have no option but to play in their rigged casino.

This video exemplifies all the signs of a major inflection point in the global financial system. Let's call that a topping signal where not just extremes are being met, but fantasy has taken over. The unregulated central banks are nearing the end of their reign. Another sign of the end occurred yesterday when they met with potus, and entered the process of TARP blackmail II. This is where they promise to implode everything if they don't get their way.

To big to fail, that was railed against for two years after the financial crisis began, has won yet again. Can anyone name me one MEANINGFUL piece of (what was essentially central bank drafted) financial regulation that was actually implemented? Yeah, I thought so. Oh, and if it was enacted, would it be enforced? Nope, cause the Dimons of the world are To Big To Jail. Remember the assistant US AG said on Frontline in The Untouchables (must see) that they could not prosecute the heads of the financial institutions, right before he was let go for doing so, cause to do so would basically crash the system.

It's all a joke. One big friggin joke, and I have not even mentioned the Fed's printing press that makes this all happen.

On to the charts - which I still think hold some meaning as the one thing will never lie to you is price.

Daily SPX - What I honestly think is the final rising wedge of all is in the top right corner of this chart. It culminates the overthrow of the rising wedge that was the major form that dominated the rise off the 2009 lows. It's a perfect ending scenario. The wedge can do two things, either have a seven point inside move or it can make an A-E five point move. A five point move has been completed. They either get one more ramp or they don't. I've shown you recently the negative divergences on the weekly and monthly charts. There should be little left even with unlimited printing that the Fed can do to lift this farce any higher. Their game is coming to an end, and Bernanke played it perfectly to the end of his tenure. The possibly the most heartless, soulless, Godless individual on the planet has served his masters well. 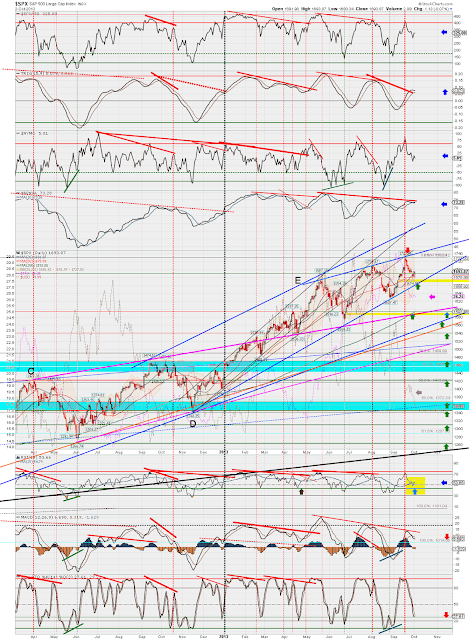 Minis 60m - You got the HnS, and off the ATH you have busted yellow channel support, busted 1687 support and now another HnS inside the RS of the larger formation (after busting support). That's not really a favorable set up in a market with negative divergences galore on the weekly and monthly charts. Add to that the government shutdown and plethoras (yes, that's plural) of other problems and you get a really nasty situation. Red major support at 1652 and s/r at 47 are still my second targets for this move. 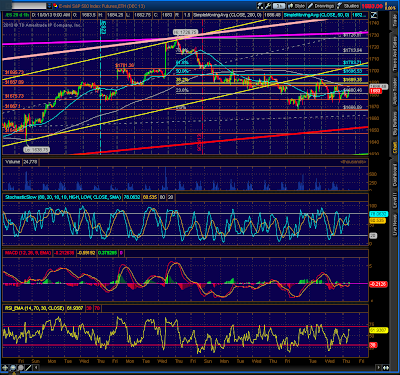