I almost pulled the trigger on a top call today and am not sure how much longer I can hold out. I "talked top" last week and gave all sorts of reasoning why it is a much more difficult task this time than in the past. Mainly there is no clear end to QEternity which is the main fear of every bear. I have to hear The Bernank speak today and after that I may make a move. As noted for some time March has the potential to be a period where many market turning catalysts will present themselves. As shown, the last three major tops have all occurred in April. Add that for well over a year now I have been forecasting that they would not be able to take the charade past Q1 of 2013. I think we're very near the end if not at it.

Who would have thought that an election in Italy of all places would rock the boat so tremendously? Things were rolling along nicely with all governments in line and moving in sync with the crony capitalist plan for global bankster domination. Then all of a sudden a democracy cries out and poof! in an instant we go from cruise control to near total panic. We all knew that things under the surface were not well at all. We all know what supports the system and that the government controlled MSMs lies to us on a daily basis about the "recovery". All it took was a ... catalyst.

Yesterday I discussed this week's busy data agenda and the barrage of retail earnings reports coming. I also keyed on the Bernank's testimony today. Next week we get into domestic the meat and potatoes with sequester, debt ceiling and budget talks. That will get really interesting as the Fed has signaled that they may not be willing to support the spending habit of congress much longer. In The Bernank's defense, he's been warning them for years they need to cut spending and they have ignored it every time.


We've been running on a "but they're still checks i n the checkbook" mentality for about 5 years now. Guess what? We're now running out of checks. We've been out of money for a decade if not longer. We're nearing the end. Sadly we have a lame duck socialist for a president. There is no telling to what lengths he's willing to increase his power. My guess is there is no end there. Scary thought.

Entitlement cuts? Defense cuts? Come on, the servants in DC will bow to their masters every whim. Of course WE are not their masters, it is the big money that owns and controls DC that truly runs the show. I suspect even the mafia like system that runs DC is beginning to strain. Is it possible that the boys in DC may double cross their sugar daddys? How many interests or masters can one slave truly serve? I have a feeling we're about to find out who has the biggest swinging ____ on the hill. Those that get left out, well, let's just say there is a chance a real war is about to break out in DC and it won't be pretty.

What will the Bernank say today? Everything hinges on his testimony. What will the economic data deliver the rest of this week? Or should I say, what do they want the data to say so they can manipulate the Fed and the markets to their desire?

SPX 60m - Regular readers know that last week or this I thought would be it. So far so good. I've been showing some pretty dire charts for month now. We should be at a major top that has the potential to delver at least a 5 to 10% corrective. A 1370 target will get us to that 10% number. Then the question becomes can the Fed and Treasury withstand such a barrage and actually recover from that? I don't think so, not again. And this is why I'm thinking major top. As in multi-decade top. As in the end of the market/world as we know it. Our "Duck and Cover" moment may finally have arrived.

The 60m 200ma got crushed in the last hour yesterday. If those support diagonals and the 1480 retrace go, it is game on. Dig the major weakness in the negative divergences that supported this last run. That's some major weakness. The monthly, weekly and daily charts are just as bad. 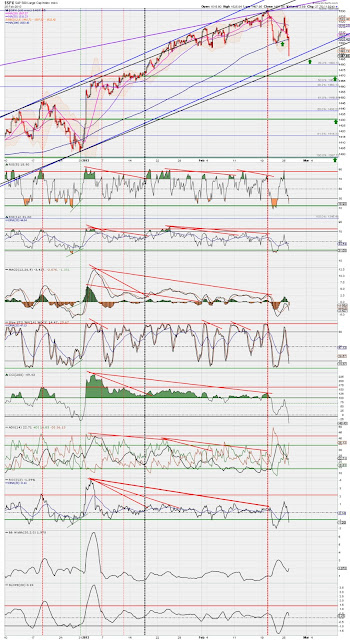 Daily SPX - MP posted some triple house of cards formation thingy in the comments last night that gave a 1370 target, so I thought I would look to see what that level had to offer. I found a double fib confluence at a major support point, so if things get out of hand that is possibly where I suspect a first move or (dare I use the term) wave would end.

Minis 4hr - Sorry, but these charts get really ugly when the market turns. 91 cracked and the 50% mark of the old pink channel caught price last night. Nice to be able to back the chart out and see the open (gray) gap below that runs from 1423 to 38. White channel support picks up near 72 and below that to 60 (my fav number) is yet another wad of support points. Note the near complete lack of support inside the white channel sans 91 and the 200ma. 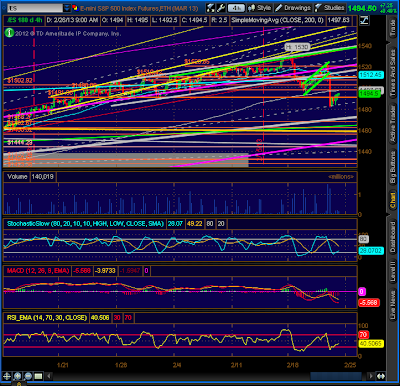 Minis 15m - if she decides to go back up her is what you are looking at. They really took that fall to extremes yesterday and the PPT is on full alert here I suspect. 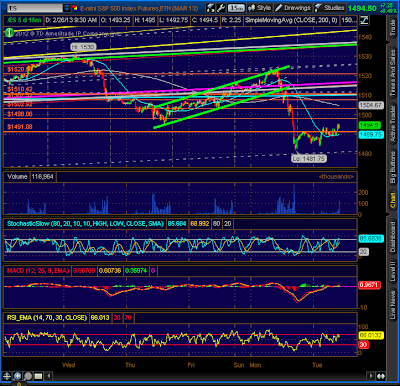