Yesterday STB was talking top. If you missed it please go read it. Over the past several weeks we've been building the case for a coming top of some sort. The charts are ready for a major turn, as in set up worse than the '00 and '08 tops (especially on the weekly and monthly charts). Right now just looking at SPX and the last two corrections one would have to first point to the daily 200ma that stopped the last two falls. This would be a move to near the 1400 round level and be around an 8% corrective. There is also a double fib convergence near 1370 if it should overshoot the 200ma as it has in the past as well.

Another clue will be the VIX (busted, I know). A move to or near the 48 level has stopped the last two falls as well. Over the next three months the VIX will begin challenging major downtrend resistance diagonals. there are three of them. A break of these should mark the beginning of the end of the end I believe.

The 1407 mark and the 1370 levels would be my first two major targets here if  the Fed can let the market correct that much. You all should know my fixation on the 1374 level by now. That is the point where I believe we had the first shot at the major top for the run off the 667 lows. Before those points there are several intermediate targets we have to deal with first. We'll get to those as they come, cause we're not going to put the cart ahead of the Fed's carrot. We have to patiently let any downside action come to us and can't force anything, cause "they" are still in control.

I'll do a chartapalooza tomorrow. Have not done one in a while, but to see where everything comes together to forma a top can help.

Daily SPX - The last daily reversal candle at the beginning of this month did not confirm. Let's get confirmation here and then we can get the ball rolling downhill I believe. First and foremost, we must fear the all powerful Fed. Never forget that. For the past week or so I've been all over wanting the 1460 to 67 level, then the assholes ramped if from 1510 to 30 but maybe now I get my revenge. The open gap and island bottom from 1426 to 1447 should be the main focus here if this downturn gets any legs. 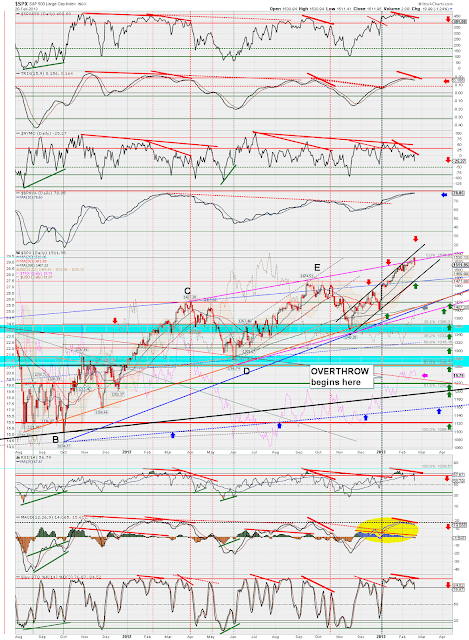 Minis 60m - All support is gone and as discussed yesterday 1490 level should be the next stopping point. I would suspect a backtest of the 1510 level at some point. There is a chance she's working a HnS with the 90 level as a potential neckline. Note the hole or support less point between lower white support diag and the 68s/r level. 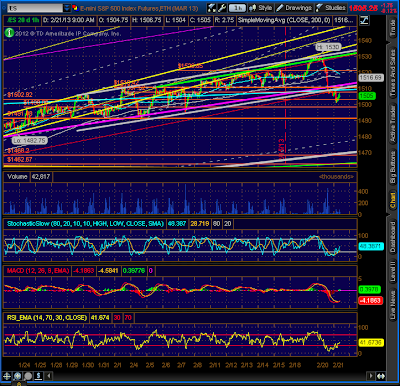