So here we sit at CB's well called inverted HnS 1530 (golf clap), now what else could be left in this era of unprecedented intervention and market rigging? The days of Fed liquidity QE on/off are gone now. QEfinity is entrenched like a permanent hopium drip. The past major tops were relatively easy calls. When the money stopped so did the levitating act.

Not only has the Fed pledged QE till eternity, but the amount of QE has been steadily increasing as well. As discussed here at STB for years now the diminishing returns of additional QE at these market levels are quite apparent. Maybe stocks are taking a clue from big oil. You know, the new economics where less demand and greater supply equal higher prices? Who knows? Bottom line is the Fed is now in a position where they can't stop or else.

Here we sit with the fiscal cliff and past debt ceilings deals with the devil coming due again. Kicking the can always has consequences that have to be dealt with in the future and our date has arrived. Sequestration and the automatic budget cuts are upon us. Is reality about to bite? Is the lame duck (or dictator - pick one) administration about to actually do something responsible for a change? Will they print their way out of this mess as well? Like a friggin soap opera with a cliff hanger at the end of each episode, but the endings are always so predictable. They must print.

With the government now heartily supplying 25% of GDP spending masking the maggot ridden rotting economy, they have no choice. Deficit - Schmeficit, carry on Helicopter Ben. What is going to stop them if they can't stop themselves. As mentioned, top and bottom calls used to be easy, but the game has changed. Back on August 2nd I warned on that day we entered an era of "unprecedented intervention", and here we sit 170 SPX points later with only record highs in sight.

I used to be able to, months in advance, place targets on price and time based on technicals and some gut instincts and with a high degree of accuracy hit those targets. I used to be able to tell you months in advance the markets would top in June or whatever, but that game is not the same one we are playing today. The game we play today is the end game I saw back in 2009 when I first started writing the blog. The game has evolved to end game status. "Not till some 'external event' rips control of the markets from the Fed will this end."

I keep discussing catalysts leading to the "event". That is all there is left to wait on as the out of control administration that is under command of the TBTFs continues to lead us o our demise. The technicals are there. The charts are and have been ready. There have been four technical tops starting from 1374 to here. I have not called one of them yet. I agonizingly wait for them to lose control or for the first domino to fall. I'll call a top sooner than later. Right or wrong it will not matter as price is so extended here and the underlying economy is so rotten that when it does turn even from above 1600 it won't matter. True capitulation is coming and it will scare the hell out of everyone.

"Unprecedented intervention" rules, so get used to it. They have backed themselves into a corner. They can not let the unregulated quadrillion dollar market of fraudulent CDSs fail or the implosion will leave a crater so large that we'll never be able to get out of the financial and economic hole that will be left. They can't fail, and thus they will continue to print till they can't or something stops them.

SPX Daily - 322 - google the number and find out why March scares me so bad. Every major top since the 667 low has happened in April. I think we get a bobble this week or next, then possibly one last bull trap run to the ultimate top. 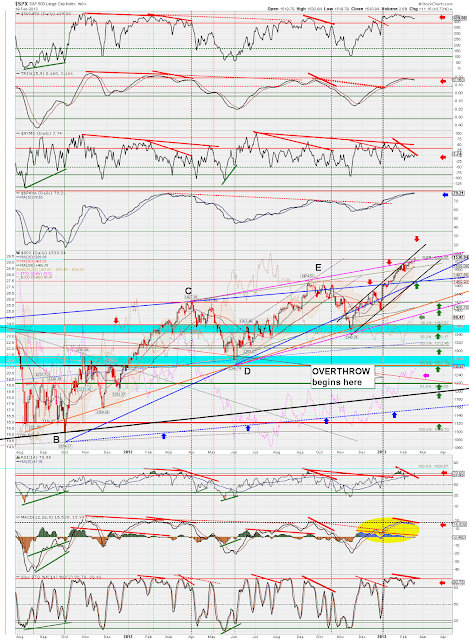 Minis 60m - White channel resistance at 1530 on the number. Wow. As discussed yesterday, there is a massive hole below price here down to the 1510 area. I'd pay attention the the 200mas on the shorter charts for first support scenarios and if those crack then worse is to come. 22 to 16 hold the major MA's. 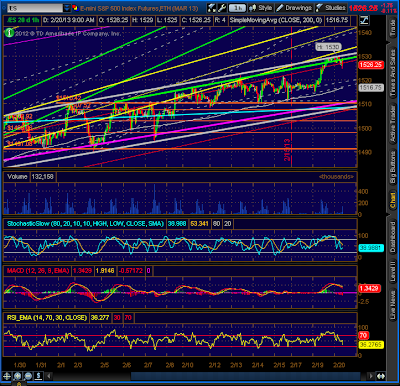 More charts below as usual.