To be kind (and appease the handler) I'll start with the establishment's spin on C earnings. "Citigroup reported lower first-quarter profit on Monday, as the bank worked to contain expenses in the face of volatile capital markets and the need to finish overhauling its business portfolio after the financial crisis. Citigroup Profit Beats Street, Revenue Falls Short - US Business News - CNBC

Now we are past that, we'll deliver the STB take on C's earnings. First, the crisis was in 2008 and here we are 4 years later. One would think that the "overhaul" would have been completed some time ago. Second, they say "after the financial crisis". Uh, hello, McFly, the crisis NEVER ENDED. Third, a revenue miss of 47%? I don't care what line of crap you try and feed me, that is a total disaster. I suggest you eternal optimists read The Two Charts That Matter From Citi's Earnings Presentation | ZeroHedge.

Apparently the government, banks and markets don't observe Emancipation Day. They probably secretly celebrate it as their models all lead to nothing but debt slavery. That aside, Previewing Today's Busy Day | ZeroHedge should be looked at as the 10:00 hour will be a point to watch as well as two Fed speeches after lunch, more QE rumors anyone?

Earnings of note to come -

YHOO and IBM sometime, GS, JNJ KO before the open and INTC after the close Tuesday
HAL before and YUM after Wednesday
BAC before and MSFT after Thursday
MCD before Friday
AAPL sometime Tuesday the 24th in conjunction with the FOMC meeting.

It's raining in Spain and that storm is about to turn into a Cat 5 disaster. You need to be prepping for that impending storm. More on that later this week. I found this post quite interesting - Guest Post: Why Isn’t The EUR Lower; Central Bank Agreement? | ZeroHedge. As most followers know I have had a 1.16 target on the EUR/USD for a long long time. Most followers also know STB does not prescribe to the conspiracy theory nuts that say the markets are controlled or have intervention (/sarc). The thought that some bastards may be Fing with or manipulating the price of a currency is outrageous!

Friday morning I gave you, "The number on the downside you need to be most concerned with is the pink LT support diag near 1359. (Note possible Shanky Spot Monday at 8:10 at 1359.)" Well I'm not sure what happens with the ToS charts, but the trendlines move mysteriously (I rarely ever move a diagonal once it has been drawn). Anyway, you can check the chart from Friday's post and see how they moved if you like. Bottom line - price nailed the pink support and white resistance backtest intersection and reversed. Magical if you ask me, not sure who else delivers like that on the web. 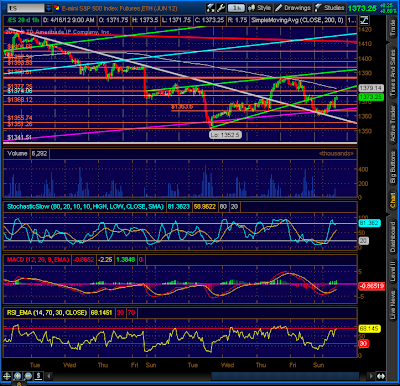 Pink support is all the bears need to look at. If that cracks it will be game over. The place to enter will be on a backtest of that diagonal. Price blew thru the 1368 backtest and is now at 74 resistance with green wedge support backtest just above near the 77s/r line. That should be a big hurdle. the 10:00 news will be key to the price reaction here at 74 or there at 77. Above that, the ever popular 1386. 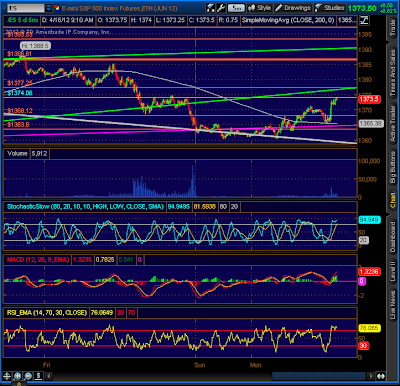 Have a great week! As usual, the market/price specific commentary comes in the comments below. the bigger charts are just nasty. We're in a topping process. A top is most likely set, but I have to hold out till the 24th and 25th FOMC meeting and the AAPL earnings release. If that pink support diag busts I'll call a top of some sort. Remember I'm looking for a much larger move south (15 to 20%) here and am looking as low as 1170.