Nice chart on CNBS this AM, the NASDAQ has been higher EVERY DAY THIS MONTH. Ahhhhh, the new normal where nothing is allowed to fall especially going into Xmas. Outside of a mob attacking Prince Charles and his mistress (oops wife), wiki attacks, TSA gropings and a plethora of other negative sentiment, I'm positive the Consumer Confidence numbers will be sterling.

POMO Schedule -  NEW SCHEDULE TODAY! The only suspense is how much more and when! Yet another POMO day today. Have no fear cause there is still over $500B to go. (We'll most likely have POMO from now to infinity or till the systemic failure that is destined to come.)

Shanky's Dark Side - Where I call all the intraday action and throw out tons of charts.

Pivot Points -  For what they are worth in this busted market.

Markets are overbought and trading at resistance levels from 1233 to 1235. You have to ask, does that really mean anything in the face of a POMO driven HFT algo run market mandated by the Bernank  to do nothing but go up? The shorts (those few die hard morns that are left) keep getting crushed and remain in disbelief that the markets will not fall. It is not hard to figure out when you listen to the master printer tell you the markets will only go up.

SPX 60m - divergences are pretty nasty, but remember these are highly unreliable. Best I can say is that the markets are overbought and the rally is (based on the SPXA50 falling) narrowly focused and not broad as one would expect. 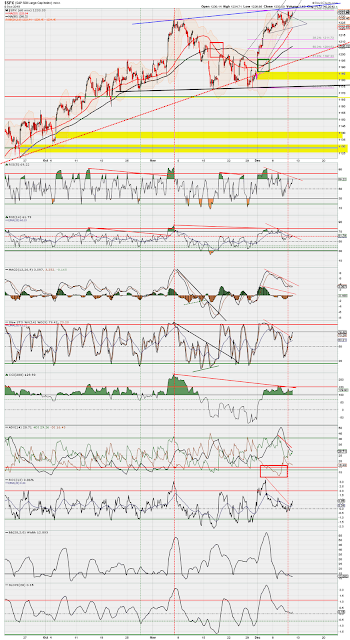 I'll deliver my CPC chart today that has been a descent predictor of market tops and bottoms. I have speculated that after Xmas all bets are off and that the market would top next in early February. Looking at this chart, that about fits the time frame, although we have entered an area that the market can turn at any point. So, a top of some sort is nearing. 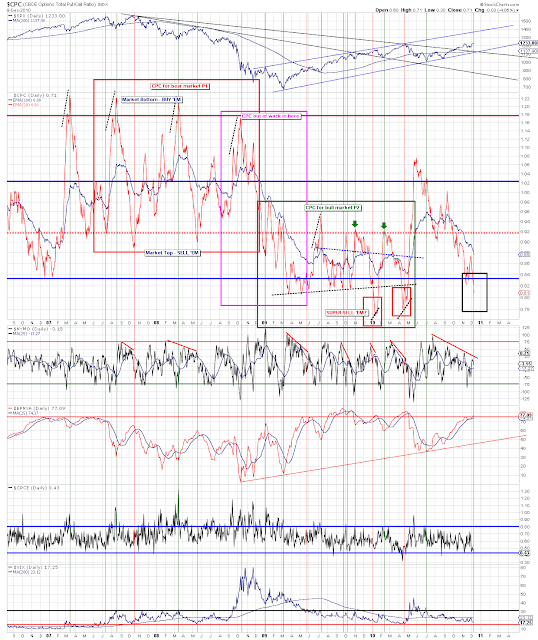 I hate the VIX (seen just above this). I know it is busted and has been for some time, but I am going to start watching it and those lows. No that is not a giant HnS pattern that is going to target negative 60. I will be interested when it gets to sub 16. At that point let's look for the VIX to start rising with the markets to set a telling divergence.

Markets at resistance and consolidating. I'm still on the consolidation train. Range bound action between 1220 and 1235 may be the norm thru Xmas barring some failed auction or another mob attacking another dictatorial elitist. I hope you have a great weekend and ask that you remember the reason for the season (whatever season you are celebrating).