Nothing has changed, and the story remains the same. Bad = Good and that's about all there is to it. Japan improves dwindling hopes of moar QE - markets fall. Someone misses GDP or had bad economic news and the markets rally. Just keep the hopium flowing and the larger the injection the better.

The worse things get the better the markets perform - why? QE, plain and simple. Whether it's a Hilsenrath or Draghi rumor, a Fed president or Yellen speaking - The only thing that moves the market is QE news (and maybe some botched foreign policy stuff like failed CIA coups or false flags gone bad which are becoming the norm).

Take the WMT miss this morning. Walmart Misses Across The Board, Guides Lower: Blames It On Weather, Obamacare And Taxes and the markets reaction? Ho-hum. Uh, hello people. The worlds largest retailer, the barometer for global everything economic has been fading for over a year. They miss and we just dismiss it like, it was the weather's fault? No big deal? All is well? Excuse me but if a WMT miss does not move the needle, then what does? QE and only QE.

Houston, we have a problem. LOL, and never mind Russia, China and Iran working their tails off to destroy the dollar. Never mind the coming Silver market un-rigging (STB "event" worth moment). Pay no attention to the now global social unrest. Pay no attention to anything! The markets are at ATH's and all is well! #LOL Like I have said for years, the market is all they have left and that illusion must survive at all or any cost. Remain patient. We're close if not there.

I could baffle you with BS and dazzle you with charts a plenty, but let's not. I'm pretty sure we all know where things stand - 16,613 feet up, on a very windy perch, on a pile of sand, on a layer of ice, on gravel that is one pebble's movement away from giving way to the fall from glory. Treacherous does not begin to describe our current situation.

You all know STB loves confirmation from the experts. This little blog just rolls along in relative anonymity doing its thing and preaching its steadfast beliefs, so when one of the "experts" comes and confirms this peons thoughts it can be a bit gratifying. Where have you heard this before? ""nervous, it's nervous time" and in this "dangerous market", it is "time to preserve money"; his advice to anyone listening: "don't be too freakin' long"." Sounds like .... me! But it was Mr. Tepper.

Top - this may become a daily bullet point discussion topic in the posts from now on. Seems to be what most are interested in, and apparently I have an audience that cares to hear my opinion on this. Uh ...... Hmmmm ...... Let me say this, there is not a single indicator left that's not pointing to a top right now. You name it and it's either maxed or bottomed out. I talk the STB "event" and show you the weekly and monthly charts. Like I said above, we're one shifting pebble from losing all support right now, and that 16,613 foot cliff is looming. This triple rising wedge scenario is really kinda cool. Who could ask for more? What a bearish technical scenario at a time when when world is crashing down and lies are all there is supporting anything. As mentioned, an overthrow of all of this would be the storybook ending to this bear market run from 2009.

Minis 15m - STB point just below at 1874 s/r/green/blue is in sight. It may or may not make it, but from when I pointed it out, price has sure started at least tracking that way. 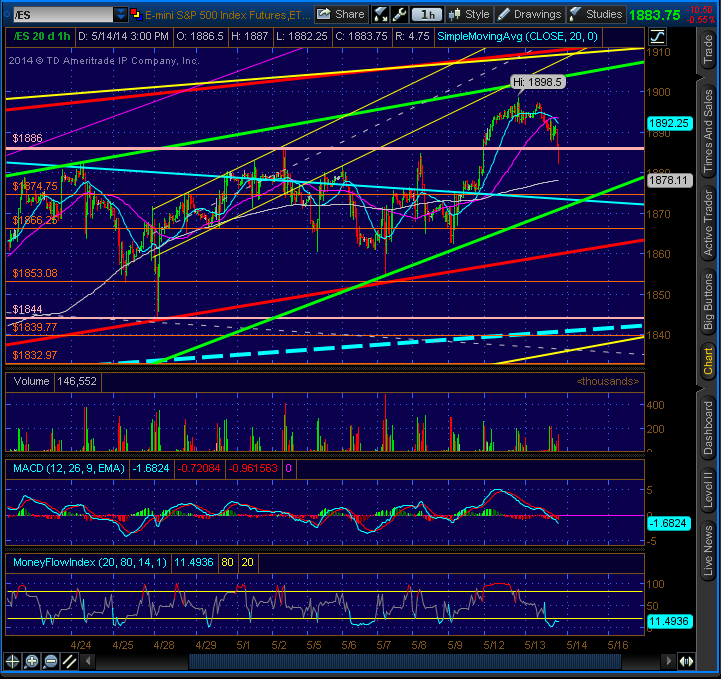 Minis 4hr - I highlighted the rising yellow wedge. A-E touches could be considered complete with the new high yesterday. This technically ends all three wedges red, yellow and green and has great potential to have marked the top. Price is literally running for its life here with the RDofD just below and blue and red dashed ultimate supports way in the picture. I must point out the potential inverted HnS with neckline at 1886. I have not mentioned this previously, but it is there. 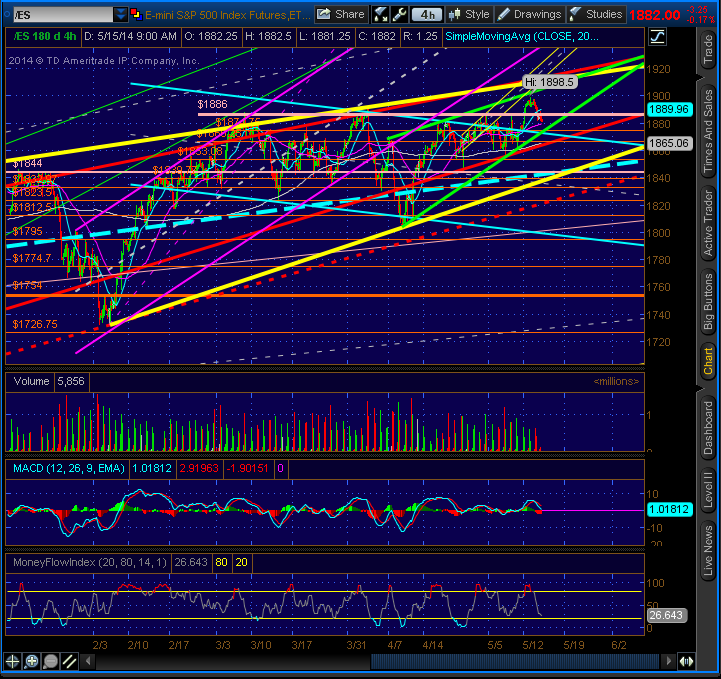 Patience and preparation - Those need to be your guiding words over the next couple of months. Be ready to strike. Be ready to survive. Don't worry about timing the top. We got 16,631 feet to fall. You'll have time to get in on plenty of good action (until they outlaw shorting of course). As mentioned above and over the years, I'd consider taking profits OUT of their system systematically. Of course this is an unpatriotic terrorist act. That said, you decide what needs to be done and where your assets are safest.


Have you shared STB lately?