Is it any wonder net neutrality is coming and they are talking about censoring the net? Let's look at Drudge Report this morning. Here are the links in the left side -

Yup, I'm pretty sure that these items (and most of the rest on his page) are things that 'they' really don't want you reading or to have easy access to.  The nanny state must protect you from yourself and all the bogeymen that are out there. Lord knows you are not capable of taking care of yourself. Remember is was not just a couple of months ago the thought police were almost placed in news rooms around the country to control news flow to the public, but for some reason they held back on this action. Yes, that really happened.

Tell me something I don't know potus. OBTW weren't you supposed to be the savior with all your hope and change BS from 6 years ago? And what did we get? Not just more of the same but even worse than before? A gazillion lies and illegal actions define your presidency. You are Captain Dysfunction. You know it. It is your job and you have excelled at it.

Dysfunction? That's being kind, or let's say liberal. How bout completely F'd up? That sounds better to me. Of course I won't be able to say such things in the overly thought policed future, so I better let it out now while I can. It would surely be a strike on my soon to have internet license if I were to say anything negative or that could be construed as derogatory. Dysfunction is just what you want and have striven for mr. Kenyan muslim potus. Congratulations, you have almost achieved your personal mission of destroying the nation.

We're headed down a path that will only lead to one thing - revolt. Revolt will lead to marshal law. Marshal law will lead to revolution and that will either result in us saving the country or becoming the Agenda 21, one world government, fascist, corporatocracy we seem to be destined to become.

Dysfunction is their tool of destruction. He's telling you, in your face, he's gloating in the fact that he's winning. They are breaking down and destroying everything that is sacred to our being as a nation. They have us divided right down the middle. Divided we can not function as a community and they will maintain ultimate control. We must come together to defeat their rule and restore liberty and freedom.

It is time for all of us to open up to new ideas and become less centric. I'm not saying leave your beliefs behind, I'm saying express them and let them be heard, but be willing to listen to others and maybe be willing to bend enough where we can start giving more and taking less. Become a bit more ... Christian. Then we will take the power back and become the nation we're destined to be. When we come together they lose. If we don't our future is not very bright.

Whatever? I've been saying almost the same thing for a few weeks now, bust it up or take it down. I like down but fear up. Blue falling channel resistance in the 1874 to 78 area has dominated price. They either take it out or its over. Markets are very nervous. Their old tricks for rampage are not working anymore. Now price moves to the next STB point this morning blue, green, yellow at 1874 s/r, and all we can do is wait to see what happens. I'll say it again, you can plainly see the reaction of price as it tagged the STB red diagonal of death below yesterday, blue channel is driving south and there is all sorts of nasty ultra critical support inside this channel that can't be crossed. They must force price up and get some breathing room or they stay on the verge of collapse. Add to the blue falling channel a new apparent yellow falling channel assisting wit the downward pressure. This technical situation added to all the neg divs and resistance combined with everything political, financial and economic is the witches brew for final disaster.

Minis 30m - If I had to guess I'd say they really want to maintain price around 1866 now and let it consolidate while they figure out how to ramp it. 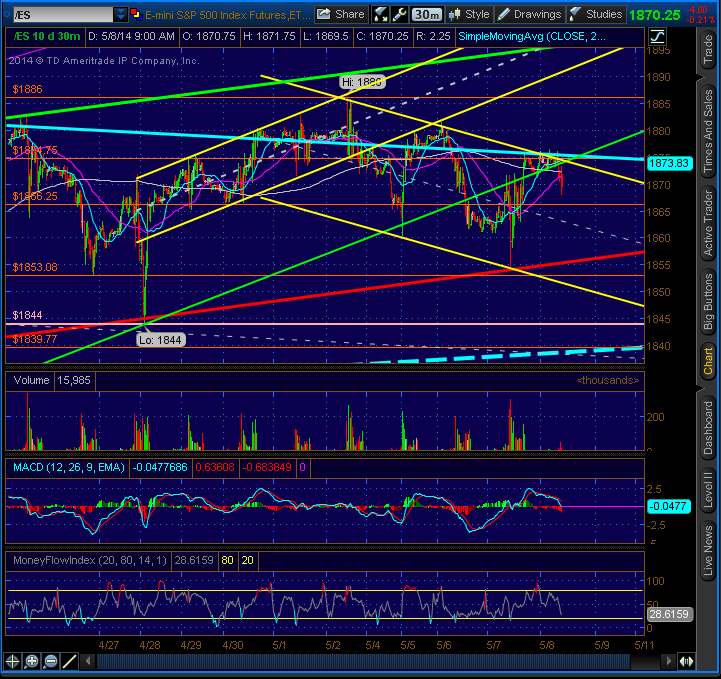 
Have you shared STB today? If not please do so.