Since the market is all they want you to care about and ponder, let's take a glimpse behind the curtain at what they don't want you to see. Let's take a brief look at the crumbling, dysfunctional, corrupt mess that is US foreign policy. Of course this mess starts and ends at the top with our leader. Knowing that, do I really need to go any further or should I just spare you the pain?

You know what happens when you put a puppet, ultra liberal, Non-US born Kenyan, Muslim, Reggie Love lovin, liar and all round sissy in the potus seat? I'd really like to think that it would not even be possible for such a combination (or even one-third) would have a shot at even making it to a senate seat. Ooops, sorry. Well, we're stuck with it.

Stay on target Shanky, leave the low hanging fruit on the tree and get to the point -

OK, so what's going down, if you can not tell, is our Muslim leader and the rest of Muslim brotherhood in office in DC is breaking with every known path of foreign policy we've ever had. Let's call it a change of direction. Let's call it pissing on the Jews and Christianity. It is what it is. Maybe this is more than foreign policy? Maybe this is more like eternal policy?

Now how's that for foreign policy in a country ruled by zionists with the AIPAC as the most powerful lobby? How's that for treating the cradle of Christianity? Pardon my french but this is really fucked up. Want the pinnacle moment of dysfunction in DC - there you have it. Congratulations America, you've been completely and utterly destroyed from the inside out by your government.

We talk a lot about God and spiritual things in the comments below. I run an open blog here and allow lots of freedoms and topics to be discussed that are not market related simply because there is more to it than just price movement. My God is Dead post to start the year from January 2012 seems to be coming more true by the day. Our new foreign policy is to dismantle Israel? From here?

Care to look at all the 'bergs and 'steins that hold office and run the financial institutions in this country? And puppet - in - chief pulls this off? In the face of the zionists and AIPAC? I knew potus was stupid but this is a new low.

Folks, wake up. We have completed dysfunction in DC, and they are making their move. Their arrogance is astounding. Complete control is an understatement. If you don't think you are living under a Godless and lawless regime, you are mistaken. 1984 is here. When you start dissing God, well, I promise nothing good is going to come from that, and we're gonna have to pay for their sins. I suggest you get ready.

Well early last week someone gave a 1844 STB point that could happen on Monday. Bingo! Maybe there are some benefits to reading STB's TA? Right on the spot we got it. I love it when a plan comes together. Now to be fair there was also one at 1900 that could happen today or tomorrow. Could something happen that could ramp the minis 26 points between now and tomorrow's close? Heck, they tagged 44 yesterday and are already almost 20 points off that low. Why not? Let's party!

Minis 4hr - blue falling channel dominates price movement here. 1874 to 1878 is critical resistance today. Straight up at intersection of red, yellow, green and pink is the other STB point at 1900. It would be wild as hell to see then both get hit. The protected the STB red line of death, 1844 s/r and the blue channel 50% diagonal yesterday. I'll reiterate for emphasis - all the critical market support - like all of it - is now inside this blue falling channel. They are OUT OF ROOM for a correction and they MUST take it higher here or else. 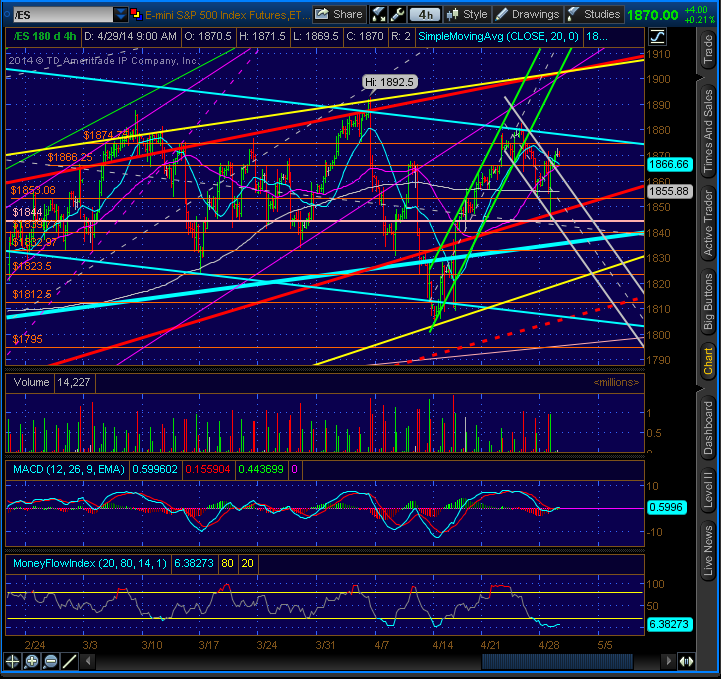 Minis 15m - I love seeing that 1844 at the STB point on this chart. That's just some good shit. Anywho - see 1874 and the upper blue falling channel resistance above. That is bully's problem. So is that red diagonal of death just below. 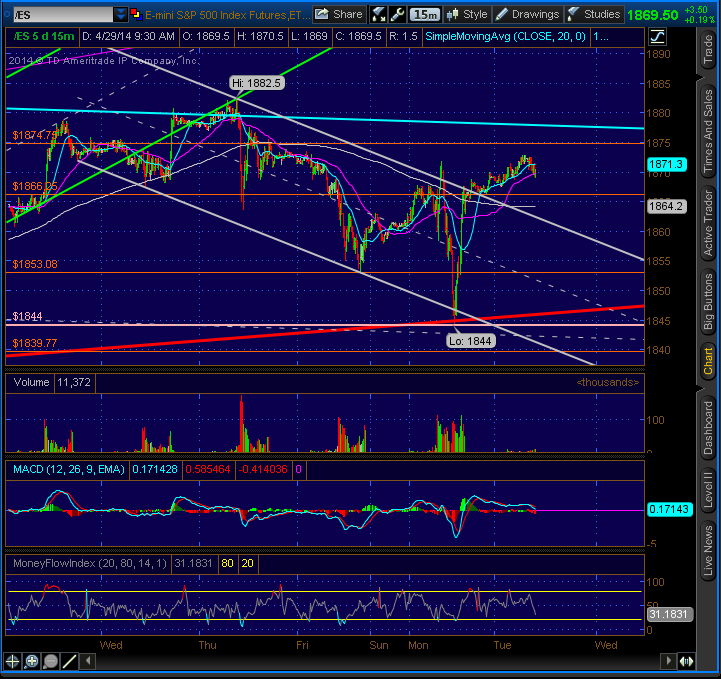