You know the drill - share the love and the knowledge.

Markets teetering on the brink of disaster. The news that was bad last week and has only worsened this week as the systemic risks become increasingly unavoidable. As Zero Hedge notes “However, in the last year or so, BofA's market fragility index has soared higher alarmingly signaling higher systemic risks than in the peak pre-Lehman era. This confirms the massively elevated signal for global systemic risk that credit markets are also sending.”

A quick look at the minis shows the rising green wedge off the lows, a possible yellow triangle corrective to backtest support and now a move north (against all odds and on bailout rumors alone). I'll get more into upper and lower resistance/support points Sunday evening or Monday morning. Keep watching the news this weekend as we're at a point where something serious could break at any moment. In the last hour the bulls managed to take out 1316 resistance. There is possible a larger ED or megaphone forming. 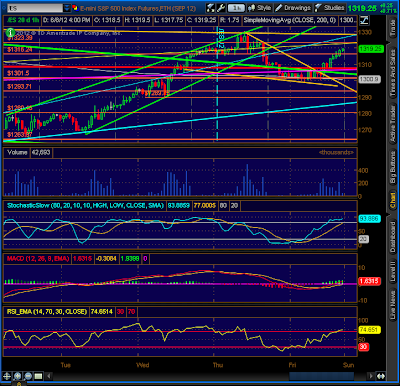 In other notable news -

You gotta read “It can be very frustrating to know that something is true but not be able to explain it clearly to someone else.  Hopefully many of you out there will find the list below useful.  It is a list of 70 numbers that show why we are headed for a national economic nightmare.”

OK, this is something that has me a bit freaked out and you should be aware of the potential threat. Yesterday there was either a nuclear leak or not of some sort in Indiana and Michigan. This was quickly dismissed as a testing station lost power (nearly impossible) and sent a glitch thru the system. Today we discover that not one but two testing stations reported elevated radiation readings. OH, did I fail to mention all of the mysterious explosions and military helicopters? Did I mention that they turned OFF one of the reporting systems networks? Maybe you should read these posts and watch the vid.

Another blow your mind must watch video - “TV NEWS REPORT: In MICHIGAN 60ft Trees Snapped off after House Shaking Booms”

I've covered this yesterday and a few times over the past month (and we've discussed it for over a year now). it's coming.... “US BRACES FOR TSUNAMI DEBRIS”

Thanks to all of you for another great week on the blog. Have a great weekend!