Who knows? The title sounded good and team bailout appears to be facing some resistance. That is to be expected as nothing is easy when insolvent entities are drumming up a few trillion from insolvent lenders and the economic and political backdrop are not so rosy.

A quick look at the markets - This morning I spoke of the potential backtest of the green busted resistance (as I always warn of a backtest whenever support or resistance is busted). Well we got it after hours compliments of a 6 point gap down after hours bringing price ever closer the the STB point I brought up yesterday morning where the green, red and pink diagonals converge near 1308 later tonight. 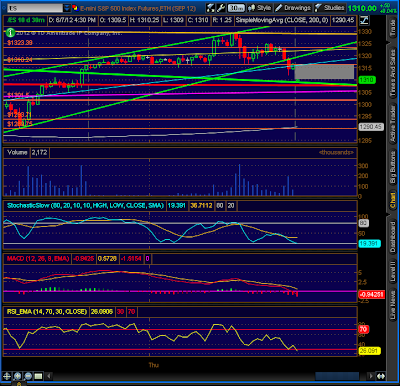 Let's have a little fun with the post tonight. I read all sorts of good stuff today while the markets were doing absolutely nothing. Pay attention - you may learn something.

“Can You Answer 25 Difficult Questions That The Mainstream Media Does Not Seem To Have Answers To?” is an awesome post that headlines and exemplifies a lot of my work here. You have to search for the truth. Get to the fringes of the internet and as far away from the MSM as possible to find the real meat and potatoes of what you need to hear. Read this one.

A good example of the MSM lying to you was printed today at WND. “One does not have to look very far to know that a news organization can perpetrate ‘Fraud” on a level such that its impact on the American public is enormously widespread and devastating both to the organization committing an act of ‘Fraud,’ which is a crime, and to the public having been harmed,” That is from the post “CNN 'BIRTHER BUSTER' REPORT 'PERPETRATES FRAUD'” where CNN is truly embarrassed.

Another thing you will find missing in the MSM will be “OBAMA CAUGHT LYING AGAIN: HE WAS MEMBER OF 'NEW PARTY,' SAYS KURTZ”. That's right, your potus was (this is firmly confirmed) a member of a socialist organization. Does that surprise you? The lies continue to roll in.

Forget terrorists affecting the Olympic games, now we have to worry about ET ruining the show. “Keep an eye on the skies for saucers during the Olympics Games, warns former MoD UFO expert” I'm a believer, but am not all that sure ET will be visiting during the games and especially targeting the closing ceremony, but....you never know. This is a great excuse to triple the ground to air defenses though.

This is from what anyone would call a reliable source (heck - they control the globe) “A 2010 Rockefeller Foundation document entitled “Scenarios for the Future of Technology and International Development” outlines a scenario which results in the death of 13,000 during the 2012 Olympics.” How bout that! So ET shows up and all hell breaks lose. Uh, honey, cancel that trip the the Olympics this summer.

Now that was far better than reading the MSM, right?