Confusion? Lack of certainty? No conviction? Having trouble believing what is real? Sentiment lagging? Faith flawed? Distrust everything? Creed questioned? Good, you are right where you need to be!

How else do you react (as an investor) to a market that no longer represents anything you have grown to know and understand over your years of study and trading? How do you manage a market that is is totally manipulated and run by computers trading near the speed of light creating false bids and giving the appearance there is actual liquidity ready to absorb your next trade? You should be stunned, horrified, enraged and boiling with anger at what the elite crony capitalists have done to destroy your markets and financial system in the name of greed and pursuit of wealth and power.

Ah, this is where you know how to deal with this issue in a calm and mature manner. It took me a while (about two years '09 and '10, I am a slow learner), but I finally got it. I threw a few calculators and other items in the office along the way and had my fair share of rants here on the blog, but once I put reality aside (in my trading life) and bought into the pure manipulation theme that fog lifted.

STB has preached for the longest time and especially since the beginning of this year to follow the Fed. What is the Fed telling you and what are they doing (kinda like the GS muppet trade), do as they do not as they say. They can talk liquidity all they want but until is actually show up, nothing is going to happen. Apparently the Fed has been removing liquidity while talking up (Fisher) and almost virtually assuring QE. This is a new trick. It is allowing the markets to walk down instead of fall down.

So here we sit on the verge of the next June 20 FOMC meeting speculating whether the Fed will ease or not. The EU is in tatters apparently not able to figure out which insolvent bank will be the next to print to stabilize the rest of the insolvent banks and governments.

Now lets get back to the confusion thingy from above, do you get it now? You should cause I got confused trying to write this and it is dumbed down. No one knows what the hell is going on. All plans have failed miserably and all they have created is an even worse debt crisis. Insolvents printing and lending to insolvents and the markets find reason for hope and rally? Seriously? You kiddin me?

That is the deal. As an investor I have recommended all years gangsta style trading (hit and run) and that still holds till a major trend change comes (we're close). Scalp and short swings with relatively tight stops and a hair trigger with dry powder is the only way to navigate this mess now.

Minis 30m - the chart is a bit sloppy or busy,sorry, but there is a lot going on. The STB point I called two days ago is being hit right now (convergence of the red, pink and green diagonals - I told you it should be too good to miss). The question becomes is this a backtest of busted green wedge resistance or the start of what should be a pretty strong move south? 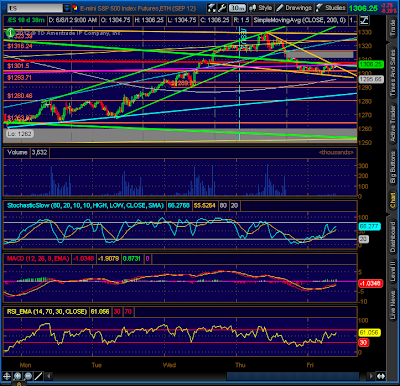 We walked price down thru three target points 1341 then 1300 to 1295 then to 1265 really well. Can price move back thru this mess of support and resistance from 1310 to 1300? If it does that same hole exists back to 1265. The other day I threw out a few of basic scenarios. Markets rally on bailout news and rung as high ass 1374 (all I'm willing to give till the fed and ECD's plans are made clear). Markets could violently trace in a range from 1265 to 1323. Markets just collapse via my 'event' and it is game over. I'm leaning on the range bound action right now.

The daily chart is still the best I got. Things are a bit jumbled right now across the technical spectrum. I'm not sure we get a sizable move right now in either direction, and I prefer sideways to down for now as the CB's work out their funding issues and the economies erodes from under them. The will go for one last stick save and we may have to wait on the (what appears to be a growing hawkish - in action not words) Fed on June 20th. In other words, my best guess at this point is we should enter some sort of range bound holding pattern for a week or so. It could be volatile - I'd guess a 20 to 30 point range. 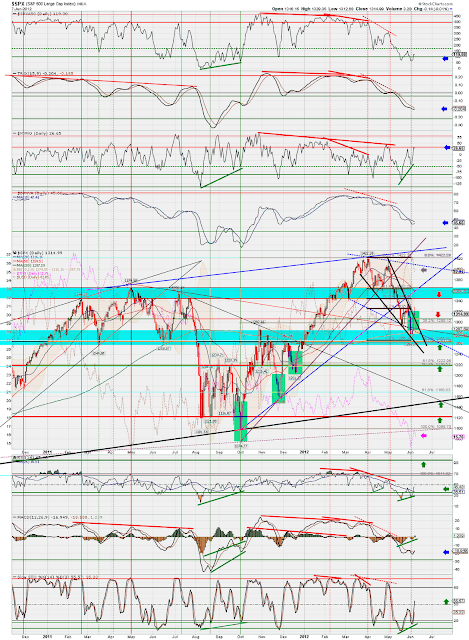 As usual more charts to come in the comments below and on twitter. I promise I will get to updating the chartbook this weekend. The ToS minis chart you see all day has been so good I have gotten a bit lazy with the other stuff.