If you want news, go read the AD the past few nights. I'm getting a bit tired or reporting all the BS that happens everyday in these rigged markets. Rigged? Shanky, come on man! OK, try this for your daily dose of riggedness. What did the ADP numbers tell us the other day? Super bullish. Right at a time the markets needed a lift. What is reality (soon to be revised even higher as they always are) "After a few brief weeks with a 3 handle in initial claims, initial layoffs once again jumped over 400k, to 402,000 in the Thanksgiving shortened week." Initial Jobless Claims Back Over 400K, Prior Revised Higher As 91% Of The Time | ZeroHedge

As for the huge stick save ramp that pulled the market off the 12,000 foot cliff this week. The ramp generated because they staved off a true disaster and fixed nothing. "Don’t get flustered by the terminology of “dollar swap lines” above. Here’s a more simple explanation: Central banks around the globe have acted in desperation to boost liquidity in the system, which has sparked a rally in equities." Central Banks’ Latest Move Shows Desperation | ZeroHedge

Minis 5m - Yesterday in the comments (I tell you post readers all the time I do most of my "calling" and give some of my best work down there) I said, "Bear case - 1236 holding. I see backtest of the wedge (all of November - thin green can be seen on the minis chart above) and the apex of that wedge today at 1246 at 5:00. Hmmmmm a Shanky point? Should be noted. That is also the intersection of the green channel upper resistance with that wedge. 1242 would measure C=A to complete the ABC. 1245 IHns (2) target above 1230 IHnS(1) target. 1236 and 1257 major resistance points.

I was an hour early where at 3:55 minis topped at 1246.75. It is hard to drill down to specific points sometimes like this one for super detail. Other than one spike overnight to 1249 which was thwarted immediately 1247 has proven so far to be stout resistance. I've doled out a few of these "points" recently with a pretty impressive (if you ask me) degree of accuracy. I'll keep giving them as I see them. 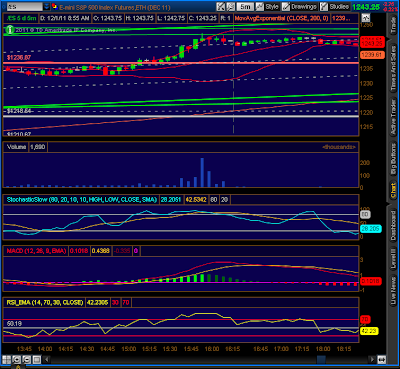 Updating charts at this point is pretty moronic, so the chartbook will remain dormant till this week is over. I did update the daily and 60m SPX charts. I updated the 5m 13/34 which shows the channel up nicely. I'll stick to the minis charts right now which are by far giving better results than cash. These are given throughout the day in the comments and on my twitter feed @shankystb.

SPX 30m - Above 1236 support/resistance and back in the green channel up trading under 1257 resistance. 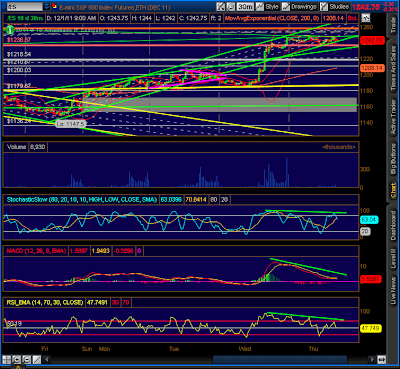 SPX Daily - Notable - the rise in the SPXA50 (S&P 500 stocks above their 50dma) to +400 a point where overbought and a reverse could be in the cards. The NYMO still has room to climb. RSI14 at 50 resistance line. Backtesting the triangle at the apex. I'll rework this chart a bit this weekend. 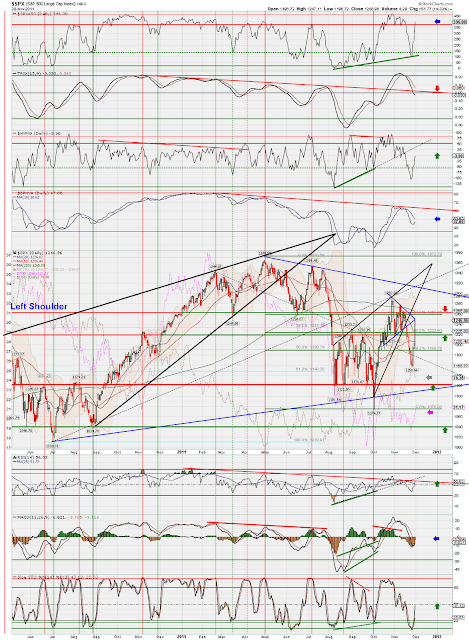 ""And there were in the same country shepherds abiding in the field, keeping watch over their flock by night. And lo, the angel of the Lord came upon them, and the glory of the Lord shone round about them: and they were sore afraid. And the angel said unto them, 'Fear not: for behold, I bring unto you good tidings of great joy, which shall be to all people. For unto you is born this day in the City of David a Savior, which is Christ the Lord. And this shall be a sign unto you; Ye shall find the babe wrapped in swaddling clothes, lying in a manger.' And suddenly there was with the angel a multitude of the heavenly host, praising God, and saying, 'Glory to God in the highest, and on earth peace, good will toward men.' That's what Christmas is all about, Charlie Brown." A Charlie Brown Christmas

Minis 1m with VWAP (pink) and VWAP Bands (Blue). 1247 resistance pretty clear. 1238 to 1236 support pretty clear. Trading on or not wanting to stray too far from the VWAP pretty clear. 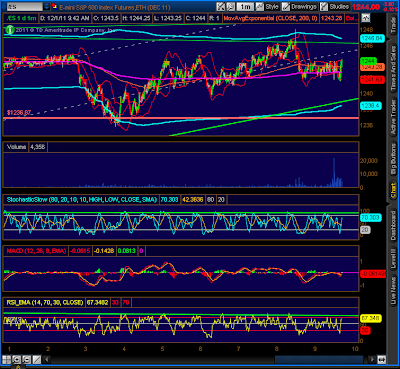