When I read the below yesterday I could not believe what I was reading, then I stepped back, laughed and asked myself why am I surprised? After all we've been through, all the printing, TBTF, TBTJ, manipulation, corruption and having stated almost daily for the past couple of years, "they can't let the market fall" what's left that could Taze me now bro?

"Sadly, we are not making this up: as part of the BEA's latest revision to the way it calculates GDP, the government will no longer count the amount of pension funding that is actually allocated to retirement accounts (counted as wages in the GDP calculation): i.e., an actual cash outlay. Instead, what the Bureau of Economic Analysis will count are corporate promises of how much companies will (may? might?) pay... eventually. The bigger the lie and the promise, the higher the GDP. And presto."

That's from The Latest Contribution to US GDP: Promises ,,,No Really post on Zero Hedge. The post does not say much more, but why should it? How else do you describe yet another patently blatant manipulation scheme designed to fraudulently mislead everything that relies on US GDP data? What? Were the trillions wasted spent, the elimination of all regulation and gutting FASB standards not enough to boost the economy into a recovery? Are things so bad that .... never mind ... why go there? Was Dodd Frank so bad that ... oops ... won't go there either.

OK. so let's get this straight - the retirement/pension system that is woefully underfunded and can't support its promises is about to get buoyed by some bean counter flunkie at an S&P 500 firm all to make the economy look better so wall street can put this recession once and for all in the past?

Care to look at the market sans QE? Take a peek at the post The S&P With and Without QE. Let me sum it up for you, basically EVERY POINT (and then some by my calculations) off the 667 lows is QE driven. EVERY SINGLE POINT!

I have another question - how's this gonna work out for the CB's when they, as proxy to the government, take over said pension plans and make them GMS (Government Managed Accounts) to equalize distribution in the soon to be socialist state of America? Will they get fees for managing this "promised" money as well? I bet they will somehow.

Things are so fubared that all there is left to do is laugh (and stack physical as you leave every dollar denominated asset in your past).

Well, it appears they will not have any problems with GDP numbers anymore, so that along with the government now taking the role of the consumer and masking 70% of the spending in the nation and student loans, I'd say all systems are go! Party on! I mean hey, if things get really bad they could always start messing with the core CPI numbers, right? Managing the yield curve? LIBOR?

Minis 30m - Well. price fell out of the blue channel and gave everyone brief palpitations, but have no fear they fought back and have now recaptured the old green channel and are even challenging upper resistance of that. There is a triple resistance point here on the minis. Combine that with a years worth of negative divergences and a breakout is bound to happen. (there is lots of /sarc in this post if you can't tell). 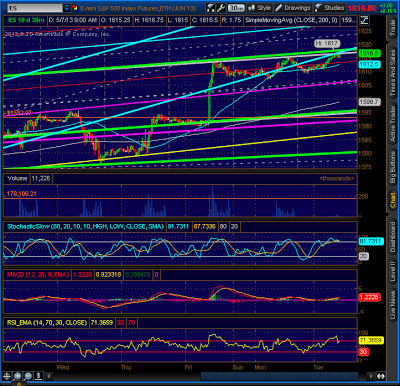 The two P's folks,  that's all I got. Patience and prepare. That's all there is left to do. Till my "event" comes it appears that it will remain business as usual. Of course no one would have ever been able to see this next collapse coming either, will they?


As usual more to come below. If targets become necessary, I'll deliver them below.