I was gonna do a big 'ol chartapalooza this morning then this happened. 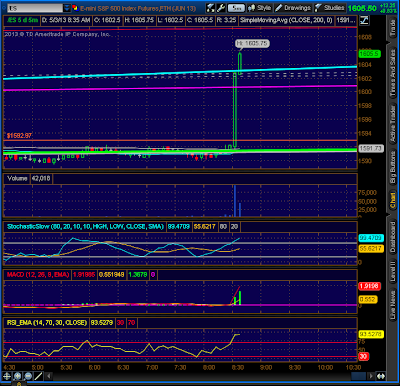 So screw that. Why put in the work when none of it really matters?

OK , I can't quit there, but my post idea has definitely changed course.

Minis 60m - I use the terms overbought and overthrown quite often. When things get obliterated technically there is no other way to describe it. For weeks now we've had 1600 hanging over our heads, and since April 18th the minis were channeling up nicely (as the Fed like to do) until until the breakdown this past Wednesday. As discussed this week, yet another HnS RS proved to be a launching pad. They really need to change the definition of that formation from Bearish to bullish. Ah, the new normal, how nice. As I always warn on any breakdown the backtest is priority number one before you can really seriously start looking south. OK bears, blue channel backtest has happened in style. This should add a bit more fuel to your fire. 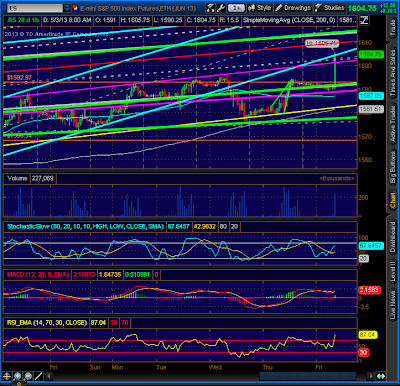 So, now we have 1600 out of the way. What now? That's a damn good question. 1700 perhaps? It only took them 4 (as in FOUR) months to move the minis from 1400 to 1600, so perhaps 1700 may be a bit conservative. At this pace 2000 by EOY should be easily doable. Technicals, schmecnicals - who gives a rat's ass if this thing is so overdone it looks like the turkey from Christmas Vacation. The markets perfectly resemble that turkey, beautiful on the outside but completely overcooked and destroyed on the inside. One slice and the innards will be revealed.


Daily SPX - At this point all you can do is laugh. That is of course you still have a sense of humor left. Note that black dashed  horizontal line. That is where the most recent case of market insanity began. the point where everything since then is completely fabricated. Back on August 02 I tweeted we were entering a period of unprecedented market manipulation. Any questions?

OK, let's discuss this top or perceived top or whatever you want to call it. It could be a breakout point. If that's the case we need to see how far they let it run and then check the backtest of 1600. The evidence is mounting for a major event. It has been pointed out numerous times in the commentary that many economic, financial and market fundamental conditions are achieving historic levels that command the markets top. Well, that was back when we had a real market, but that is besides the point to some of the un-indoctrinated.

The two P's, Patience and Prepare folks. We must let this thing play out. Let the trade come to you. I still contend everyone will see the point, the time, that moment when the turn happens. This 1600 point is very critical to both sides, but the bulls have the Fed on their side. The bears have ... nothing really other than time. These once was a point when I'd be shorting here with both hands but not today (nor at the last three or four points I mentioned this). They are in total control of the market and you absolutely must realize this. the market will only go where they want it to.