Well, I delved into updating the chartbook this weekend after some time away and discovered that there was nothing there to learn. Overbought extreme conditions were confirmed. The confirmation of market exuberant lunacy was acknowledged. Not sure why I updated the chartbook as we all know nothing real matters now in this fully tilted casino called a stock market that runs solely on rumors of easing and perpetual printing.

I do believe the charts have it right. I believe the charts will always get it right. Raw price will never lie. It may mislead in this HFT algo bot driven BB Put supported world, but like the flow of water price will always find the weakest point and then the flow will follow. Till that weak point is discovered and it is excavated, all investors can do is wait till the storm comes.

The storm is coming. The evidence keeps on piling up on the shore. It is hard to look around and find any positives. Economic issues to political and social strife, trouble is everywhere. Central Bank printing can only carry to load so far and when the printing stops it will be the day the music died (and we'll be singin ...).

The news bits that caught my eye this weekend (other than the nastiest, dirty, most disgusting democratic/socialist presidential campaign and the current administration's policy of lie first and force the MSM to report falsehoods to the sheeple) were Greece Caught Underreporting Its Budget Deficit By Nearly 50% and The Fed Has Another $3.9 Trillion In QE To Go (At Least). Does either surprise you?

Proving that even the best are getting burned by the Bernanke Put (so don't feel like you are on an island) Janjuah Stopped Out delivers, "While Nomura's Bob Janjuah remains 100% correct in his diagnosis and prognosis of the current 'grossest misallocation and mispricing of capital in the history of mankind', his tactical short was stopped out last week. The modest loss on the position though provided clarity on the importance of the 1450 level for the S&P 500 and he remains confident that on a multi-month timeframe he expects 800 to be hit with only a muted 10% possible upside in global equities due to underlying growth, debt and policy-maker concerns. Critically, he suggests it is premature to go aggressively short risk at this precise moment, urges traders to stay nimble, and warns "...risk assets are in a bubble which of course can extend, but which can reverse sharply and suddenly. Up here, 'valuation metrics' are not going to help much... this bubble could extend for maybe a few months and by up to 10%, ...but that we could see global equity markets 10/15% lower in virtually a 'heartbeat'."

Now, where have you heard that virtually every day (except I do not delve into upside potential any more other than I have offered 1502 as next major resistance)? Again, STB loves confirmation from the pros. Gangsta style trading, scalp and run, don't get committed short till the turn is set. Wait on the catalyst to turn the momo and then the "event" will come. I believe THE turn will be extremely clear to all.

As for the charts - make of them what you will. You know what I'm doing.

Minis Daily - Hard to read. Let me help you, price just goes up. If something happens I'll drill in and give you the numbers you must know. 1432 is first key support. 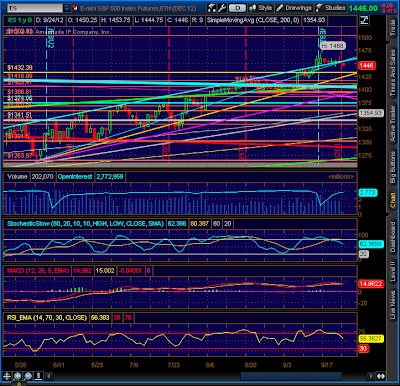 SPX Daily - That is one big nasty blue rising wedge that has price overbought and overthrowing upper resistance and should target somewhere near (uhem) 1170. 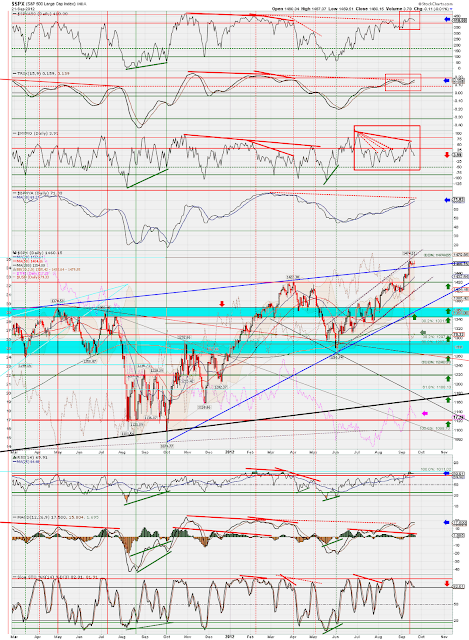 As usual, more detailed analysis and news below.

Have a great week.