Well, things are moving according to plan. Nothing is happening, as should be suspected. Nothing has come out of the past several EU meetings (Except a couple of failed LTRO's), and this one should be no different. But wait, they must come up with a solution. No, not really, as the promise of a solution and continued bond buying by the ECB have been all they have needed to keep things alive for now.

As suspected, the Germans are not cooperating. They are not willing to follow the rest further down the rabbit hole of debt. Wiemar me once, shame on you. Wiemar me twice shame on me. The people of Germany are speaking loudly against further aid to the periffery, and the head of the German bank is taking the role as the lead bad guy in this shit storm. Apparently at least one group over there can see the light and is not living in fantasy land.

We're close to the end. Greece is hanging by a frayed thread and Spain is literally imploding in front of our eyes, but the markets seem to care less. The Bernanke put is in place. The promise that the central planners will always be there in every emergency is all that is keeping the markets afloat now.

What this week brings will be very interesting. They have to come up with something and apparently will not and can not. Are we finally looking at the great default? That is very possible. The results of the German auction yesterday were less than desired. Spain is now in full blown desperation mode having activated their emergency lending program (ELA). Apparently the bank runs are finally taking their toll on the big banks which expose the frailty of the fractal collateral less lending system.

As for the charts here and what's happening with the markets, nothing new to see here. All is well, move along. Price has stagnated and consolidated between 1425 and 1390 for the past month. The rising wedge is trying to break down as upper resistance off the 2007 top suppresses price, and the seriously weak double top formation signals severe danger.

The Fed and the central planners have taken this market to the limits and price is finally beginning to show serious weakness. The only chance they have for a higher high at this time is a big QE announcement or a massive outflow from the EU to the US markets.

The charts are there as I have been sowing for the past month. All you can do now is wait on the catalyst. As warned on August 2nd, we have entered a period of unprecedented intervention. Nothing is real anymore and until something happens that is out if their control (my event), they will elevate price as long as possible to give the illusion that all is well to keep the sheeple calm and quiet.

SPX Daily - What concerns me this morning is the dramatically narrowing BB's on the daily chart. If you did not know, a narrowing BB signals impending volatility. The lower BB was tested yesterday. Sub 1396 and I believe price enters a new dimension where return to above 1400 will not be possible for some time (if not decades).

Minis 60m - 1396 is the key here as well. Price is starting to super consolidate and a break below the range will trigger sell stops this time. If Potter and the PPT can fend this move off it will be a true miracle. This would be a point where even the banks and hedge funds would begin to sell which would generate a true run on the markets. 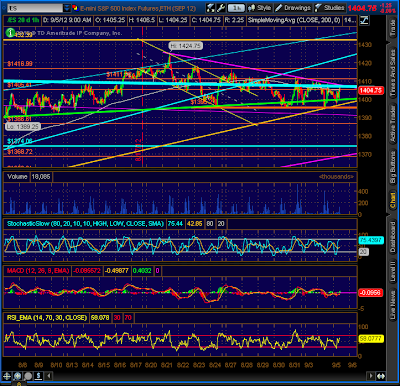 Yes, folks, were dancing with the devil on death's door step. There is no other way of putting it. The band plays on, but when the music stops the trap door opens and down we go. How long they can keep pumping nickles into the jukebox is anyone's guess, but they can't do it forever.

Sorry, but I can not dazzle you with bullshit as some sites do. There is no magic bullet. The charts are ready and they will give us the correct answer. Patience is the main ingredient to getting the trade right. As mentioned 1,000 times if not more  nothing has to happen till the Fed says so. The charts are there. Remain calm and wait ion the catalyst. It should happen this week (if not last night).

As usual, I'll get into more detail on price movement and the news below with the core commenters as the day rolls along. Times are testy. As I have said all year, follow the fed and scalps are the only way to play now. Hit and run, get your profits and get out. Do not fall in love with one side of the trade or the other as nothing "has" to happen no matter how rational that thought is. The only thing that will happen is what the central planners want, till they lose control.