I hate to start Monday morning this way, but things are downright depressing right now. I have to warn you that I may adjust into full panic post mode for the near future on the blog, because the time to wake up and sound the alarm is way overdue. I know I have been sounding the alarm since the beginning of the blog, but I believe we've reached the critical DEFCON Level 1 stage where immanent destruction is on the horizon.

I believe the Fed's QE3 decision is the tell that the fiscal cliff is about to be crossed, the EU is totally dysfunctional, the farce that China is the future is being exposed, the death of US citizens in MENA, global tension is expanding, and on and on. We are in the death spiral.

The worst part of this whole scenario is that our elected leaders have proven to be nothing but shills for the system. Representatives is not the term that should be associated with the bought and paid for politicians that work to serve nothing but the crony special interest groups that dominate DC. If we had true representation we'd never have gotten into this mess. If we had representation we'd have regulation. Of course we can't have any regulation at this point or the system that is built on bribes and fraud would totally collapse.

So, the Fed threw in the towel knowing that without QE3 at this time the fiscal cliff would be breached. The Fed can see the global devastation occurring and that is to come. The Fed knows the end is near, and so they did what they do best, pump money into the system to which gives the illusion that all is well.

Trust me, no one in DC other than the Pauls has a set big enough to tell the truth or is willing to deal with reality. Hell, how many people do you know want to deal with reality and accept the truth? If the Fed can just keep on printing and we can maintain these levels till eternity, then things are just fine, right? Well, that is not reality and the deficit spending, the debt and the continuous printing are only getting worse.

We'll have to deal with the lies and deceit one day soon. The sheeple will be mad as hell. The funny part is that we're the ignoramuses that allowed all of this to happen, living in our self absorbed worlds where as long as we can spend freely we don't give a shit what our government does. We have no one to blame but ourselves. We're the ones that let the system down, not the other way around. We allowed them to placate us with debt or silence or distract us with bubbles of wealth. The candy man is about to die. The pusher is about to get gunned down and with that all the excess will go away.

Tough times are coming. I've been telling you for years that they will confiscate all the retirement plans (and most likely all bank and investment accounts). I've been telling you to pay for your gold, guns, ammo and other preppper items in CASH so they can not track your purchases. They will begin confiscating your items sooner than later and the less they know you have (or can track thru CC purchases) the better. The more assets you can transfer out of the dollar and into hard assets the better. Even Faber is calling for gold confiscation now.

I'm still in top calling mode. The charts are totally ridiculous. Nothing matters much now but what the HFT algos decide. The markets are a total farce. As I have been telling you, follow the Fed. I am simply waiting on my catalyst to turn the markets. I believe we'll all see it when it happens.

Can they keep this market afloat? Of course they can dominating 70% of the trading providing false liquidity and the illusion that all is well. Be patient and let the top come to you. In the meantime continue to scalp long and short, take your profits and get the hell out.

Minis 60m - Overthowing the most recent rising wedge off the June lows defying all gravity. You are witnessing the largest blow off top in the history of the markets. Yes, worse than the end of QE1 and 2. Let it run its course and wait on the "event". First major support is around 1400. As for upside 1502 area from 2007 top is next resistance. 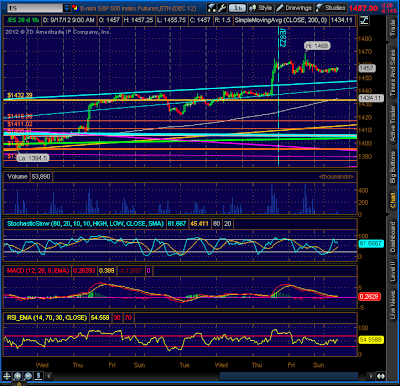