So, the system truly is corrupt (as STB has been claiming for years). Money laundering and backdoor deals do exist (and soon to be proven unicorns and sprites exist as well). It was only a matter of time before the unregulated mess we call a financial system began to expose its gnarly underside. Most recently Senate Throws The Book At HSBC Accusing It Of Massive "Money Laundering And Terrorist Financing", No Comment On NAR Money Laundering Yet from Zero Hedge highlights the nastiness that it takes to keep the current system alive and running like the well oiled bribed or paid off machine it is.


The JPM fiasco is just beginning as to their rigging of the CDS markets (one among many yet to be uncovered not to mention silver) with the criminal (very unusual but much welcomed word to associate with a bank isn't it?) inquiry. I can pretty much assure you that before this mess is all over it will be discovered that everything was rigged. Well at least we can rest assured now knowing the treasury was not using taxpayer money for sex (unlike the SEC's online ventures).


The big news today will be the Bernank's testimony at 10:00, where you can be assured QE will highlight the conversation along with the decades of LIEBOR manipulation. I've been telling you for years the markets were rigged. It is fun to get the last laugh after years of "that can't be" and the "Shanky you're nuts" emails and conversations. OF course the naysayers are all off in their holes somewhere cocooning and living in their permanent state of denial.


Where will be the next points of reference that STB will be correct? The coming socialist state where the police crackdown will be unprecedented in our history and the confiscation of every retirement asset in the country would be the two best places to start. What a wonderful world we live in.


As for the markets, the consolidation continues along the bottom of the blue rising wedge. The potential STB point where white s/r at 1341intersects with blue wedge support is just below. I thought we'd consolidate below 1341 into today, but instead we're doing it just above the support. The chart below and on cash both show the 60m ready to roll over with some telling divergences. 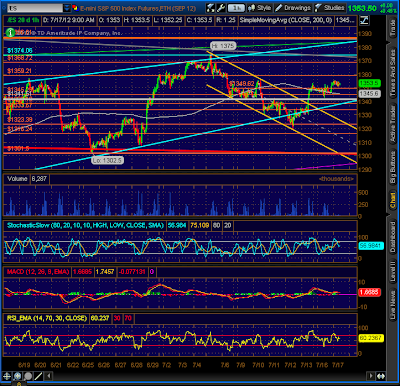 Maybe the Bernank will disappoint today? I know I will remain sidelined until the Fed tells me what to do. If 1341 cracks, there is real danger of price finding "Big Red" at 1300 if not worse. Upside potential should be limited and any movement up should be a struggle. As usual earnings season adds to some of my predictive paralysis, noting that this is a tough time to try and get too far ahead of anything as it takes so little to start a mini bull run. I'll see if I can get a post up on earnings with some charts.

I would like to suggest that you read the #Barack ObamaDidItForThem feed on twitter. It was one of the best reads of the year so far IMO. One laugh after another at the expense of or fine potus.