Scrolling thru the news that past few days has my level of concern for our safety and privacy (basic Constitutional rights) rising yet again. STB and the commenters report daily on issues where we the people are being taken advantage of (in the terms of Constitutional rights being interpreted by the government for our their best interest regardless of the laws in place).

I think it is that time again where I bring to light issues facing you daily that you really need to be aware of. This is serious stuff. When you hear the term "police state" thrown around, maybe next time you won't dismiss it as quickly as some sort of conspiracy jargon.

Lets start with this video from Washington's Blog and MSNBC - Please take the time to watch this:


And now the flurry of links about your privacy being invaded and the shadow industry of data mining (them tracking everything you do, when and where and selling that information for direct marketing or to assist governments in developing profiles of you).

Facebook privacy row: Social network giant admits to 'bugs' | Mail Online
"Most would assume that Facebook stops monitoring them after they leave its site, but technology bloggers discovered this was not the case.
In fact, data has been regularly sent back to the social network’s servers – data that could be worth billions when creating 'targeted' advertising based on the sites users visit."

Dutch cops using TomTom data to position speed cams Alex Jones' Infowars
"TomTom has issued a statement after it was revealed that police in Holland are using historical speed data, captured by its savnav devices, as a guide for positioning speed traps."

OnStar kills plan to track ex-subscribers
"General Motors' OnStar service just announced it was reversing plans to keep tracking vehicles of its 6 million subscribers if they cancel the service. Now once it's off, it's off."

Federal Reserve Wants to Spy On and Manipulate Social Media (WB and ZH)
"The Federal Reserve Bank of the United States, … in a Request for Proposals filed to companies that are Fed vendors, is requesting the creation of a “Social Listening Platform” whose function is to “gather data from various social media outlets and news sources.” It will “monitor billions of conversations and generate text analytics based on predefined criteria.” "

Police: Burglar used Google Maps to case upscale suburban homes - Chicago Sun-Times
Yeah - you know THAT Google maps - even now the criminals are starting to figure out ingenious ways to use it.

Metal Detectors to be Introduced at Green Bay Packers Game Alex Jones' Infowars
This is gonna work well. You knew it was coming though. Good luck getting in to your seats before kickoff.

Now lets get into the pickle the EPA is finding its self in - just a slight problem here - did they push something thru for our fearless leader that was flawed and incorrect in order to induce policy that was favorable to the administration's positions? Now, now, now, they would not do a thing like that would they?

Flawed Science | Greenhouse Gases | Environmental Protection Agency | The Daily Caller
“This report confirms that the endangerment finding, the very foundation of President Obama’s job-destroying regulatory agenda, was rushed, biased, and flawed. It calls the scientific integrity of EPA’s decision-making process into question and undermines the credibility of the endangerment finding.”
Report: EPA Cut Corners on Climate Finding - TIME
The Inspector General report, obtained by The Associated Press in advance of its release Wednesday, says the agency circumvented a more robust review process that was warranted for a technical paper supporting a costly and controversial decision to control greenhouse gases for the first time.

Too Much Of A Good Thing | The New Republic
From Peter Orszag - "To solve the serious problems facing our country, we need to minimize the harm from legislative inertia by relying more on automatic policies and depoliticized commissions for certain policy decisions. In other words, radical as it sounds, we need to counter the gridlock of our political institutions by making them a bit less democratic."

If you were wondering - All the odd colored brown behind the type print - yup, you got it - sites are now encoding format that makes it near impossible to copy and paste content where it looks right.


OK - decided to tinker with that 60m SPX chart from this morning. This is not a call or anything just looking at range bound trends. What is they get another stick save rumor? 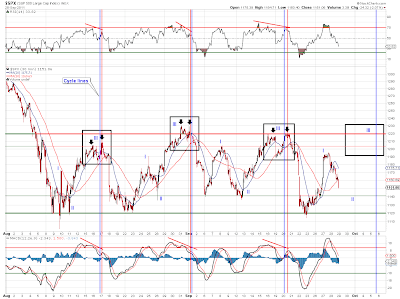