Maybe the best development since Pelosi had her meltdown is this Obummer/Hildabeast spat. Isn't it only appropriate that after all the fuckups over the past 6 years (that can not be blamed on Bush) it comes down to internal party bickering and one huge pissing match. We're finally seeing the true colors of the Obummer/Clinton love fest.

In Exclusive: Obama Told Lawmakers Criticism of His Syria Policy is 'Horsesh*t' the ballless wonder finally stands up to ... something? Right or wrong, good or bad target, political lines or not - he finally stands up. Of course everyone is wrong and lying, but that does not matter. The meltdown is priceless. The loss of composure and not eating crow for the democrap party is surprising. The division and coming meltdown is long overdue.

Clinton sees the light and is going to distance herself as far as she can from the lame duck, and guess what - all those that want to be in her good graces are about to abandon O as well. We're getting ready to see a party split wider than the Grand Canyon. You are about to see a president completely and utterly abandoned.Hildabeast will start collecting her stooges - what will Pelosi and Reid do at this point? Do their allegiances start to change? This is going to get good.

O's not gonna have a leg to stand on. The Clinton's are putting the gloves on and going for an early knockout. He's not even a two legged stool - maybe one leg at best. He's about to get roasted. How he fires back is the big question - that may be the scariest part. How deep can he go into rhetoric to defend himself without exposing both of their crimes (think especially Benghazi and ISIS). This destroys everything (which would only be just and right). He's screwed and about to be made irrelevant (if that is even more possible).

Race card? He can't even use that. He's screwed everyone. His puppetness has done his masters bidding and done his best to destroy this country. What happened to hope and change? Well hope went out the window (especially for his low income supporters) and change - one would think Bush/Cheyney are still in office but worse.

Things are about to get interesting me thinks. Captain transparency that became a known liar and vacation/golf addict is about to be served up with a well deserved side of reality.

SPX Daily - Well the February sell off made it 100 SPX points, I guess 80 points will have to do this round. Pretty pathetic to call that a correction or even categorize it as some sort of downside move. They could not allow even 1/2 of a percent. And think of the fear that puny little move generated.

What's interesting is this backtest of the black busted support diagonal (this is the equivalent to my Red Diagonal of Death on the minis). If the bears can hold 'em here something real may go down. I'm not holding my breath, just saying we now live in a world and play in a market that has the real possibility of going POOF! at any moment.We have to check these backtests like it or not.

Despite the lack of positive divergences they turned it (so far) without any necessary assistance. My MACH histogram signal (first day following up day reversal) worked nicely. Put this one in your memory banks. It is not fool proof but has worked with a high degree of accuracy over the years. 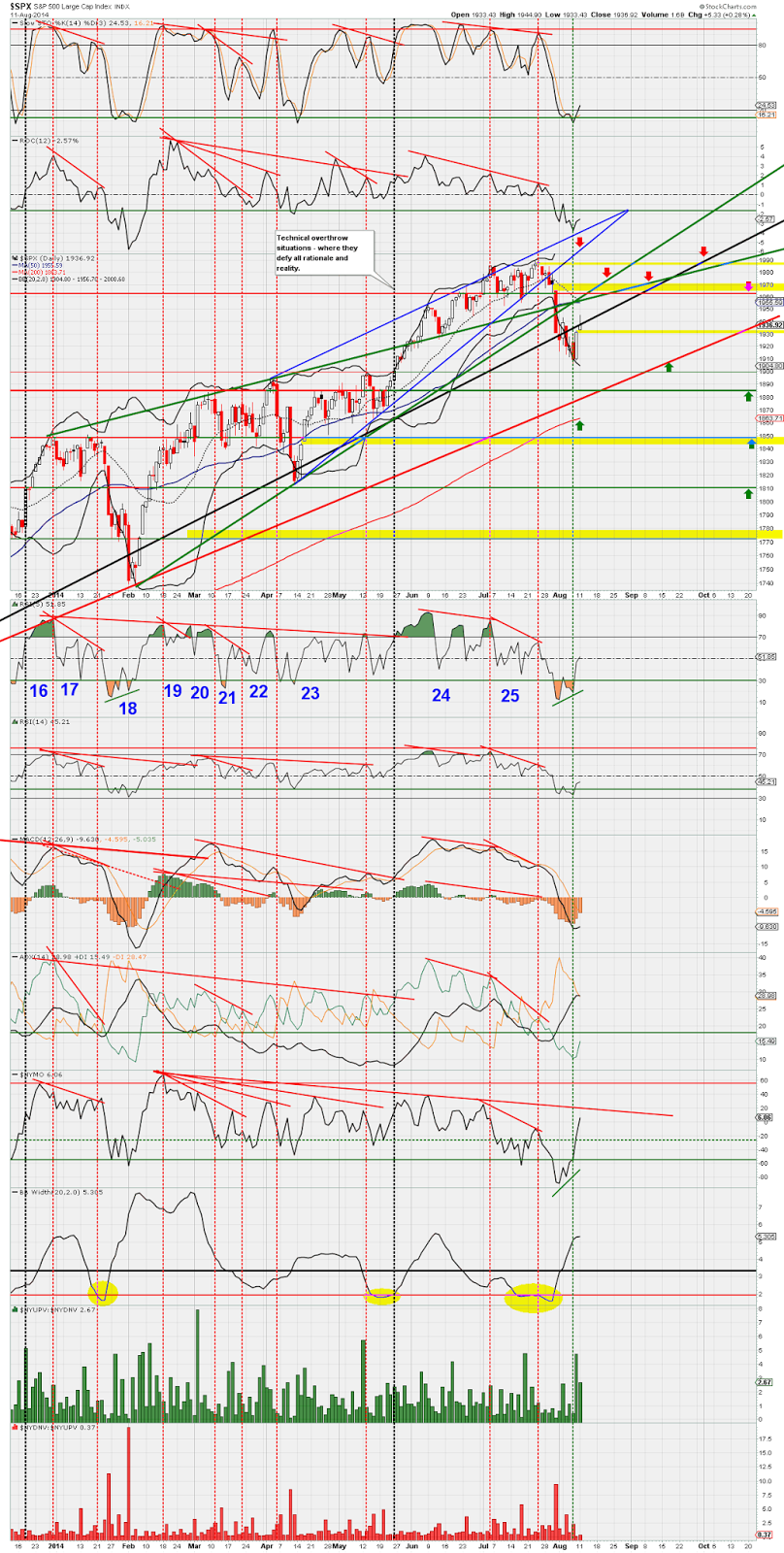 SPX 60m - Double positive divergences worked well for Bully's cause here. I think the bears have the ball still, at least to 1965. The 58 to 65 area may be the next battleground. For them to push it over that upper black resistance diagonal again would really be something. The 60m chart is already showing overbought to some degree. No form can be detected yet in this up move. If anything at this time a bear flag may be forming. Bully would have liked to see a base channel form but did not get it. 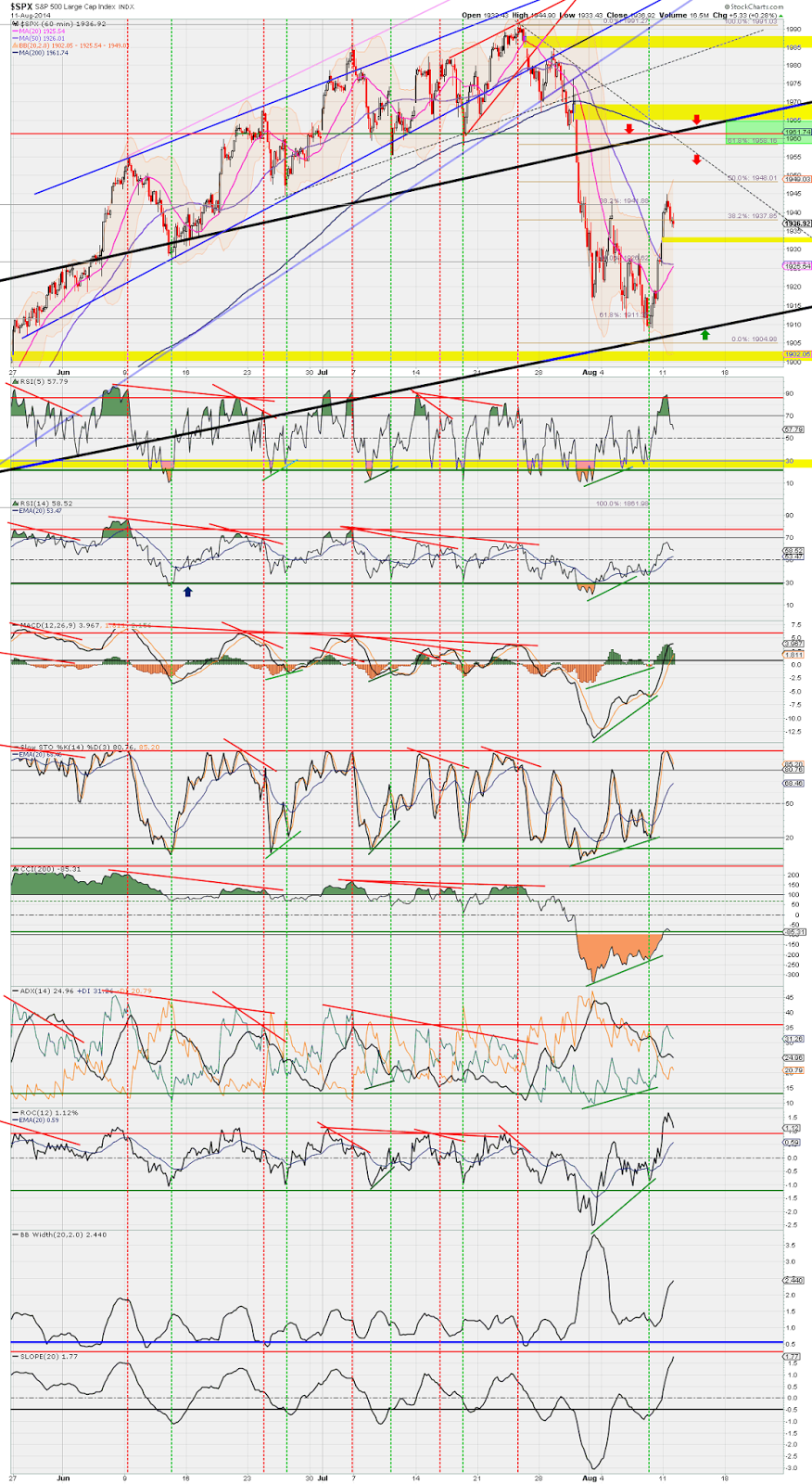 What's the Fed got left in the tank? Are they ready to throw in the towel, or do they have more work theft to be done?